Graduate students at the USC Price School of Public Policy and the USC School of Social Work organized the Students of Color and Allies Policy Forum to engage in collaborative and constructive discussions on race and social justice.

The forum held on April 3 originated last year as a way for graduate students to establish a safe environment to examine issues of race, class and inequality. For this second installment, titled “Communicating for Change: Building Narratives to Advance Social Justice,” the conversation was opened up for undergraduate students and community members to participate.

“By rerooting policy in the community, by acknowledging the leadership and expertise of community leaders, by recognizing our own privilege, and by recognizing pervasive racial and socioeconomic inequities, we begin to break down the barriers between policy experts and the public they should serve,” forum co-chair and USC Price Master of Public Policy student Christopher Lo-Records said to open the event. “That starts with communication, with dialogue and with the amplification of community voices to highlight problems and propose solutions.”

One of our focuses is illuminating societal issues through good storytelling.

“One of our focuses is illuminating societal issues through good storytelling,” Bates said. “For you all as policymakers, I think that’s an important part of how you are going to be doing your job.”

Armour noted that he wrote a book in 1997 titled Negrophobia and Reasonable Racism, and he’s been asked to speak about it at the upcoming Los Angeles Times Festival of Books at USC because so little has changed in race relations over nearly two decades.

“It’s like I wrote it yesterday,” Armour said. “Critical race theory is about how do we get at the underpinnings that make this problem so intractable. Why have we made so little progress, and what are the deeper analyses that can get us out of this rut? 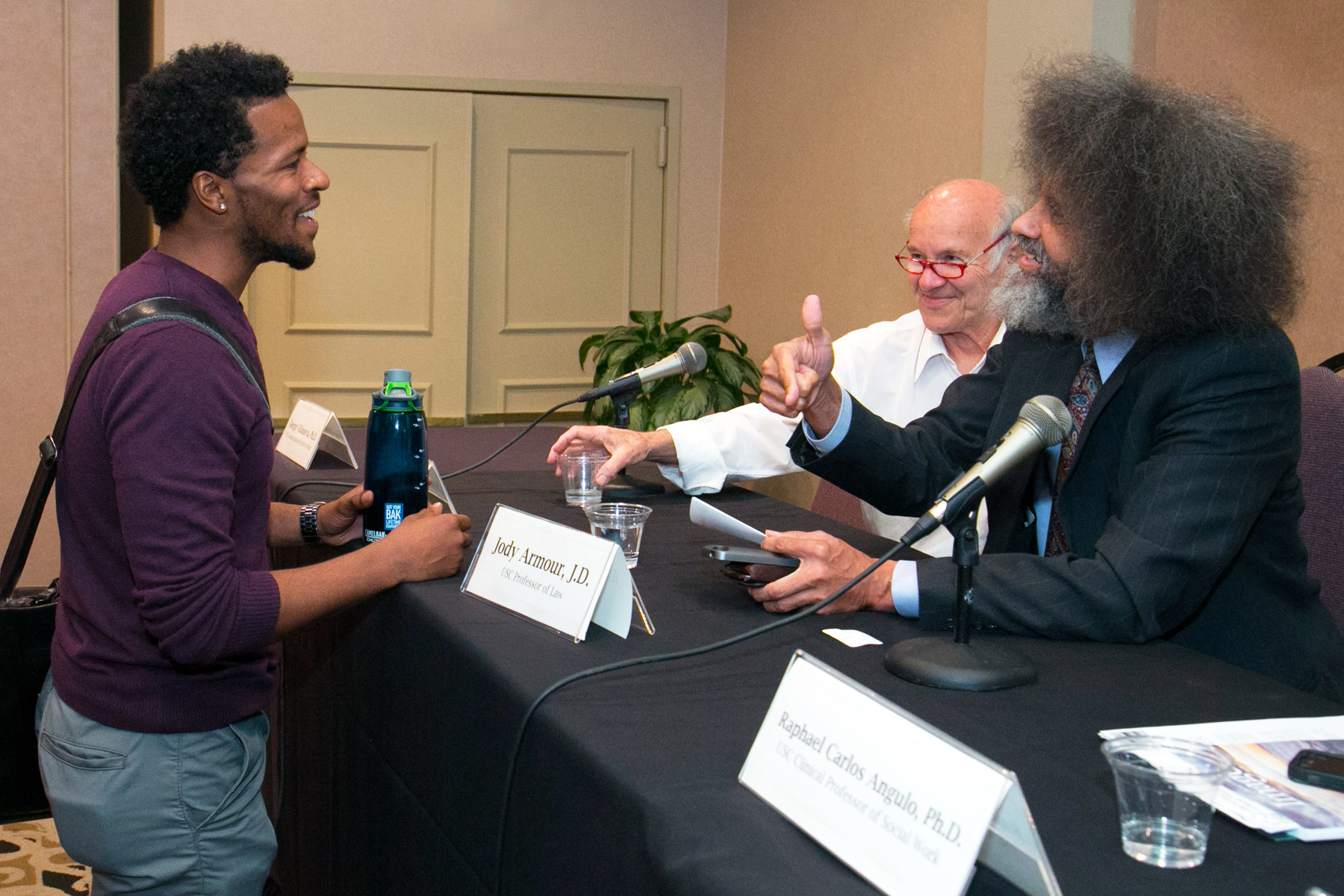 Panelists agreed that storytelling and narrative were critical when it came to issues of race and that traditional mass media can’t be counted on to tell those stories.

“We as social workers need to find ways of being able to use media platforms to further enhance those stories on a much deeper level,” Angulo said.

Social media has had a tremendous impact on allowing members of the communities from which there is trauma to get their stories out there.

Workshops for the forum focused on storytelling for impact, listening for change as a way to comprehend these stories, analytics for social change to use data and numbers in an effective manner, and community organizing for impact.

“Last year, we came together to begin conversations about race and social justice,” said forum co-chair and Price Master of Planning student Rosaline Tio. “This year, we considered what we could do not just to replicate what we did last year but to add to it. That’s why we tried to emphasize a theme of communication and how to communicate effectively when trying to discuss issues about race and inequality, and why we thought it was important to invite community members to take part in these conversations.”

In addition, as part of this year’s forum, the students hosted an academic poster competition which was judged by a faculty panel that included USC Price professors LaVonna Lewis, Gary Painter, Annette Kim and Social Work Vice Dean Paul Maiden.

Students Sandy Lo, Jessica Medina and Tess Thorman submitted the winning poster — titled “Who Benefits From Legalization of Sidewalk Vending in Los Angeles?” — focusing on the geographic distribution of LA street vendors and provided recommendations for the city on how legalization of street vending can be implemented as a strategy to achieve food justice.

Posters examined other issues, including the use of pocket parks to address the lack of open space in underserved communities and how social workers can best address the needs of transgender women.

Working-age Hispanics at highest risk of dying from COVID-19, by far

The USC study of California death certificates shows foreign-born Latino adults face a significantly higher risk of dying from COVID than U.S.-born men and women who are not Hispanic.

The pandemic echoes a history of disruption for Black families

USC experts discuss how COVID-19’s disproportionate impact on the Black community connects to a long history of upending Black families in America, from slavery to incarceration.

In the midst of the COVID-19 pandemic, a wave of anti-Asian violence has risen

USC experts discuss the recent murders in Atlanta, a surge in violence against people of Asian descent throughout America and what can be done about it.