It sat in storage for 50 years — a machine that could see and identify objects and patterns, the VIPTRON was built by Val Schnabl M.S. ’69 when he was just 17 years old, and it would start him on a lifelong, successful engineering career.

It was 1963 and Schnabl was a senior at Brookfield Central High School in Wisconsin. As always, he planned to enter the science fair, where he had won prizes in earlier years, including one for a robot car that could maneuver around obstacles. But he had an even more ambitious project in mind that year.

“I decided to build a machine that could see and identify objects, patterns and letters,” Schnabl said. “It took many months to think of how to do it, design it and then build it. Back then there wasn’t anything like it out there.”

To use the device, an object was placed in front of the “eyeball” of the machine, and clusters of photocells centered on the object, tracking its outline relative to its center. It then produced a graph for the shape with the object’s varying radius on the y-axis and rotation angle on the x-axis. The result was a complete radius versus angle plot that was unique for each shape.

After generating this distinct graph signature for an object, the machine compared it to its database of graphs and could find a match or the closest match if it hadn’t “seen” that particular object before. 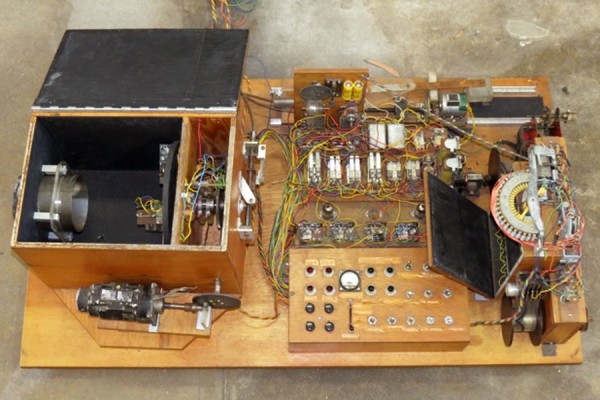 VIPTRON stands for Visual Interpretation of Patterns Through Electronics. (Photo/courtesy of Val Schnabl)

“The main thing is that it worked,” Schnabl said. “It correctly identified objects, patterns, letters, etc., by looking at them. That was 50 years ago. Nowadays, of course, the same thing is done using optical scanners and computers with special software.”

He called it VIPTRON for Visual Interpretation of Patterns Through Electronics. It took months for Schnabl to build his machine, including a two-week absence from school. And while he missed the deadline for the local science fair, his teachers advanced him to the state science fair based on his previous successes. There, at the Wisconsin State Science Fair at Marquette University in 1963, he won first place and a full-tuition scholarship to Marquette.

Additionally, Schnabl represented Wisconsin at the National Science Fair in New Mexico, where he won a summer residency at Wright-Patterson Air Force Base in Ohio as a guest of the United States Air Force.

The ins and outs of industrial and systems engineering

Specially trained engineers will be prepared to address major global challenges of the 21st century.

Can engineers create higher resolutions of the brain?

Two researchers are developing new MRI protocols to get better images of tumors.

VIPTRON — the machine that could see and identify objects