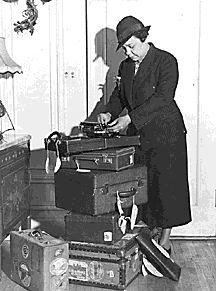 USC alumna Fay M. Jackson (‘27) – pictured above in 1937, returning from London – was a pioneering journalist, movie publicist and newspaperwoman. Jackson founded the first black news magazine on the West Coast, Flash, in the late 1920s, and during the 1930s, became the first black Hollywood correspondent for the Associated Negro Press. Her column appeared in 216 black newspapers across the U.S., and she used her influence to establish a magazine that helped black women find jobs. In 1937, the ANP sent Jackson to London to cover the coronation of King George VI. She sent back interviews with Emperor Haile Selassie of Ethiopia, performer Josephine Baker, H.G. Wells and Alberta Hunter. In 1940, she started the California News, a weekly black newspaper. Beginning on the first and continuing through the month of February – Black History Month – the USC Black Alumni Association and Information Services Division present an exhibition of items from Jackson’s extensive collection of memorabilia. The exhibit includes photographs, telegrams, articles, scripts and playbills, spotlighting Jackson as a part of a vibrant, intellectual class of urban blacks concerned with improving race relations. Showing through Feb. 29 in the Lewis Hall Gallery, the exhibit opens with a ceremony and reception on Tuesday, Feb. 1, from 2 to 4 p.m. Gallery hours are Monday through Friday, 9 a.m. to 6 p.m. For more information about the Black Alumni Association, ISD’s Historic Families Initiative or reservations for the opening reception, call 213-740-8342.