Scientists have found a way to measure the unseen toll that environmental stress places on living creatures — showing that they can rev up their metabolism to work more than twice as hard as normal to cope with change.

Stresses from climate change such as rising temperatures and increasing ocean acidity can move an organism closer and closer to the brink of death without visible signs. In fact, the researchers — led by USC’s Donal Manahan — were surprised at just how good organisms can be at hiding the stress they’re under.

Manahan and his colleagues found that increasing carbon dioxide levels in water to the level that they’re anticipated to reach by the end of this century could cause a commonly studied model organism — a sea urchin — to more than double the amount of metabolic energy it spent on protein synthesis, the most basic function needed to stay alive, without showing visible evidence of the stress.

Think of a metabolic budget like your household financial budget.

“Think of a metabolic budget like your household financial budget,” said Manahan, professor of biological sciences at the USC Dornsife College of Letters, Arts and Sciences. “Protein synthesis, one of the most basic things an organism does to stay alive, is like your rent. Added stresses from climate change cause that rent to get more and more expensive. You can still survive, but that money has to come from somewhere. And without increasing your budget, you get closer and closer to the brink of disaster, unable to cope with any unexpected crisis.”

A living organism’s body is in a state of constant regeneration, continually rebuilding itself by creating new proteins. Those proteins are created by cells through consuming adenosine triphosphate (ATP), the energy currency of cells, analogous to money in the metaphor above.

To quantify changes in metabolic budget, Manahan and his colleagues — USC postdoctoral research associates T.C. Francis Pan and Scott L. Applebaum — measured the amount of ATP that was necessary to continue protein synthesis as stresses ratcheted up.

The study was published on March 30 in the Proceedings of the National Academy of Sciences. 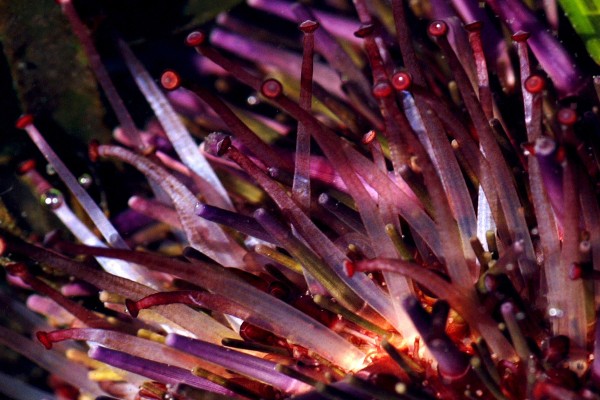 Strongylocentrotus Purpuratus is one of several biomedical research models in cell and developmental biology.

The team found that, under normal circumstances, sea urchins spent about 40 percent of their metabolic budget on protein synthesis and regulating the amounts of ions in their cells. Under one of the more conservative environmental conditions predicted for the end of this century by the United Nations Intergovernmental Panel on Climate Change (IPCC), the sea urchins would need to spend 84 percent of their metabolic budget on just two processes — protein synthesis and ion regulation.

Calculating the metabolic budgets took two years of work, including rearing the early stages of sea urchin development at the USC Wrigley Marine Science Center on Catalina Island — one of the few places in the United States with the facilities needed for such large-scale culturing experiments, Manahan said.

Pan and Applebaum bred millions of microscopic sea urchin embryos and larvae in several 200-liter culture vessels of sea water, testing thousands of individual specimens at a time. The larvae are so small that each group of several thousand is just barely visible as a smudge in a test tube.

Sea urchins are a great model organism for studying the responses of marine animals to environmental change.

“Sea urchins are a great model organism for studying the responses of marine animals to environmental change,” Pan said.

Using radioactive tracers, Pan and Applebaum were able to measure how much protein the sea urchins were generating and then calculate how much ATP was used in the process.

“By measuring protein synthesis in entire organisms — rather than from tissue samples taken from individual organisms — we got a clearer, more accurate picture of how the metabolism of the whole organism was changing under environmental stress,” Applebaum said.

Next, the team is building upon its new understanding of cellular metabolism and stress by studying the genetic and environmental (“nature and nurture”) bases of physiological responses to global change.

“We think that variation in the ability to allocate cellular energy within a fixed budget may be a key basis of resilience to environmental change,” Manahan said.

The research was supported by the National Science Foundation (Emerging Frontiers 1220587).