Students, keep your eyes peeled for those thick envelopes: USC sent acceptance letters to 9,050 high school students vying for a place in the Class of 2019.

Those receiving acceptance letters come from all 50 U.S. states and 77 other countries. Twenty-nine percent have perfect GPAs of 4.0. One in eight would be the first in their families to attend college. 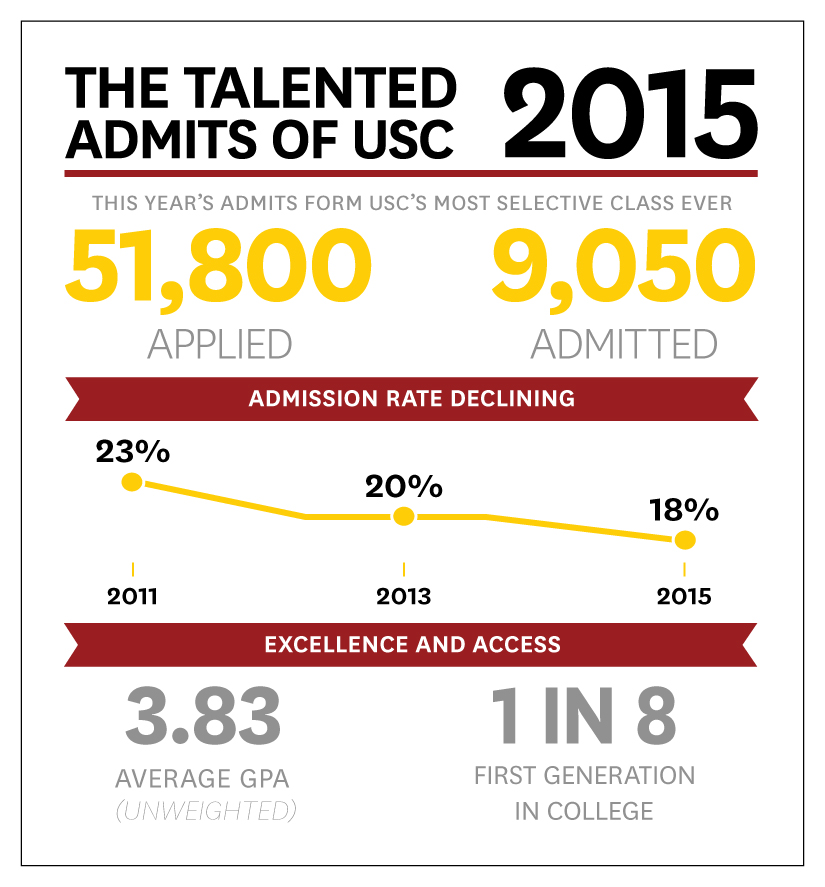 The admitted pool of students was selected from a highly competitive and diverse group of 51,800 applicants with broad geographic, ethnic and socioeconomic representation. This year’s admission rate of 17.5 percent is the lowest in USC’s history.

“The students who have just been invited to join the Trojan Family have it all: fantastic academic preparation, impressive patterns of involvement and leadership, incredible diversity — in every sense of the word — sincere academic curiosity and an eager willingness to tackle the world’s toughest problems,” said Timothy Brunold, USC’s dean of admission. “I know that our faculty can’t wait to meet them.”

Keeping Kaufman School on its toes

Interest in the inaugural class of the USC Glorya Kaufman School of Dance was high, with more than 350 applicants for what will become a highly selective class of about 20 bachelor’s of fine arts students.

“It is clear that our program at USC Kaufman is one of the most progressive and attractive dance programs in the country. The faculty collectively represents the highest caliber of educators and choreographers in the world — students want to be mentored by them,” said Jodie Gates, vice dean and director of the USC Kaufman School.

Most students who enroll at USC will be beneficiaries of the university’s strong commitment to financial aid for undergraduates. USC admits students without regard to ability to pay and meets the full demonstrated need of admitted students.

Additionally, USC is among the top elite private schools based on its enrollment of Pell Grant-eligible freshmen: The university enrolled more than 23 percent low-income undergraduate students in fall 2014. Just as notable: Students’ socioeconomic status has no impact on their graduation rate.

USC admission by the numbers

The following points provide a broad academic and demographic overview of the fall 2015 pool of students admitted to USC (enrollment commitments are due May 1, and these numbers may change):

The envelope, please: Admission letters go out in the mail

Attention, future Trojans: Members of the USC Class of 2019 will be getting big news very soon.

For the third year, the university ranks among the schools with the most students in the prestigious program.

Of course, it was brought in by a truck — two tons of snow right next to the Traveler statue.