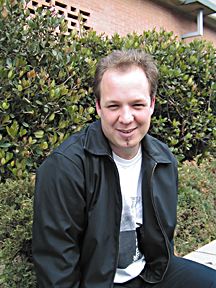 Simon Schorno completed “Poetic License,” about poet Manazar Gamboa and the conflict over the razing of Chavez Ravine for Dodger Stadium, as a thesis for a master’s degree in visual anthropology.

One of the projects – “Poetic License” by December graduate Simon Schorno – was completed as a thesis for a master’s degree in visual anthropology.

“This is a quite a coup, especially since it is rare for students to have their work accepted by such a prestigious film festival,” said Nancy C. Lutkehaus, an associate professor of anthropology and co-director of the Center for Visual Anthropology. “This is the first time we’ve had links to two Sundance films in the same year.”

Simon’s 28-minute-long “Poe tic License” deals with the Chicano poet Manazar Gamboa and the conflict surrounding the razing of the Mexican-American community of Chavez Ravine for Dodger Stadium. It was one of 72 entries featured in the festival’s short program competition, which showcases “an eclectic array of films lasting only minutes,” according to festival literature.

The film was screened six times over the course of the 10-day festival. It was also shown at October’s L.A. International Film Festival and was a finalist in the University Film Video Association’s “Next Frame 2000” competition, which is touring a broad.

(“Poetic License” will screen at USC at 7 p.m. March 23 as part of the Center for Visual Anthropology’s three-day “Kaleidoscope of Culture” festival of student and alumni ethnographic films.)

The other Sundance entry with links to the anthropology department is “Ruins,” a 77-minute experimental film about the histories of Mayan and pre-Columbian artifacts. The film’s maker, Jesse Lerner, received a master’s in visual anthropology from USC in 1991.

“Ruins” was one of 17 entries featured in the Jan. 20-30 festival’s “Frontier” program, which showcases “the most exciting experimental work,” according to the festival’s Web site. “Ruins” was screened three times in Utah. It was also shown twice in December at the Guggenheim Museum of Art in New York as part of the “Frames of Reference” film festival.

he last time the Center for Visual Anthropology was represented at Sun dance was in 1994, when “Bui Doi: Life Like Dust,” a short documentary about Vietnamese gang members in Southern California, was screened. The film by MVA recipients Nick Rotherberg (1994) and Ahrin Mishan (1993) was also completed as a thesis project.

“Our intent in visual anthropology is not to train filmmakers but to conceptualize anthropological concepts and present them in media other than print,” said Gary Seaman, the other director of the Center for Visual Anthropology. “But Sundance is highly competitive. Having alumni work represented there demonstrates that we attract very talented students and provide an intellectual environment in which they can flourish.”