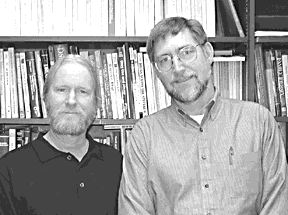 Researchers Michael D. Newcomb (left), Rodney K. Goodyear (right) and Russell D. Allison (not shown) are in the division of counseling psychology at the Rossier School of Education.

USC researchers are examining a neglected area in studying the problem of teen pregnancy: male partners and psychological variables that might come into play.

In a study of 349 Latino males, Rodney K. Goodyear, Michael D. Newcomb and Russell D. Allison found that factors other than sexual behavior alone predicted for responsibility for teen pregnancy among these men. The factors included quality of childhood experience, gender-related attitudes and restricted emotionality.

“Challenging male gender roles and implementing interventions that reduce family neglect and abuse could well reduce teen pregnancy,” commented Goodyear, the lead author, who is a professor of educational counseling. All three authors are in the division of counseling psychology at the USC Rossier School of Education.

The findings, which were reported in the January issue of the Journal of Counseling Psychology, are of interest because while teen pregnancy rates in the U.S. peaked in 1991, among Latino teenagers pregnancy rates rose 32 percent between 1989 and 1995.