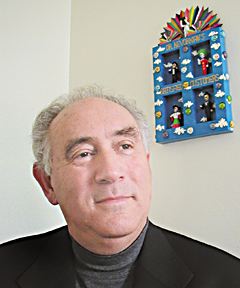 Ronald Gottesman, editor of “Violence in America,” with a Mexican Day of the Dead piece of folk art called “Dr. Kevorkian’s Satisfied Customers.” Euthanasia is covered in the three-volume set.

While growing up in a faded industrial town in Massachusetts, Ronald Gottesman observed a fair amount of violence, particularly on the walk home from his Hebrew school.

“I was chased home – or to wherever I could find safety – by the Irish kids in the neighborhood,” he recalled. “They threatened to crucify me for what I’d supposedly done to Jesus. But then I’d try to convince them that some other group was responsible.”

Despite such colorful firsthand experience with violence, the veteran English professor isn’t the most likely candidate for a 3 1/2-year descent into the history of violence in America. After all, this is a scholar who is teaching general education and upper-division courses on nature writing this semester. He’s the founding editor of two scholarly journals in the arts and humanities and the editor or author of 150 books covering such subjects as Upton Sinclair, Henry Miller, Orson Welles, William Dean Howells, robots and Sergei M. Eisenstein.

Yet, Gottesman is catching a breath after having delivered “Violence in America,” a three-volume survey of the subject. Gottesman conceived the project and served as editor for the 595 entries in the encyclopedia released last month by Scribners. He also wrote virtually all of the “scope descriptions” or blueprints used by the project’s 444 contributors, 25 of whom hail from USC. He also helped identify and woo those scholars – a daunting task involving more than 4,000 “pitch” letters.

“I feel as great a sense of relief as accomplishment,” Gottesman said of finishing the task.

Beginning with “abolition” and ending with “Zoot Suit Riot,” the encyclopedia is either awe-inspiring or utterly depressing in its scope, depending on your point of view.

What really happened at Waco? How does film violence affect us? Are hate crimes different from other violent crimes? What effects do drugs and alcohol have on the incidence of violence? The encyclopedia wrestles with these and other volatile issues.

Beginning with early encounters between Europeans and Native Americans and concluding with the shootings at Columbine High School, the set spans more than 400 years of history. Some 40 or 50 very long essays – as much as 15,000 words – are broad takes on topics such as criminal justice or riots. Another 150 shorter essays undertake subjects such as the violence of slavery and American methods of execution. Two hundred more entries detail such topics as sexual harassment. Finally, another 200 entries, the briefest, examine individuals and incidents that resonate in the national psyche, from Lizzie Borden to the bombing of the Los Angeles Times building.

“Every time I saw somebody I would ask, ‘What first comes into your mind when you think of violence?’ and I’d see if I’d already thought of it,” recalled Gottesman, who will mark his 25th anniversary at USC this year.

Has an incident become so much a part of the cultural currency that most educated Americans would at least recognize the event by name? Has a person entered the public imagination through works of print, film or television? These were some of the questions he asked himself when deciding what to include and what to cut.

Gottesman first became interested in studying violence as a graduate student, writing his master’s thesis on violence, terror and death in Mark Twain’s “The Adventures of Tom Sawyer” and “Ad ventures of Huckleberry Finn.” (“What organized the books’ curious episodic narratives wasn’t character or plot but rather an undercurrent of violence and death.”)

But the idea for the encyclopedia grew directly out of a 1995 graduate seminar called “American Media and Discourses of Violence.”

“I realized that while there were myriad books dealing with violence, they were limited to novels, coffee-table books on famous murderers and specialized academic works,” Gottesman said. “There was no solid reference source spanning all the facets of violence, nothing both substantive and broad-based.”

In preparing the course’s lesson plans, Gottesman came to appreciate the impressive array of USC faculty – 16 USC disciplines are represented in the encyclopedia – whose research explores violence.

“In this case, you don’t want to say cutting edge, but certainly the variety and quality of violence research at USC is as good as anywhere,” he said.

If Gottesman seems inappropriately irreverent, refer to the encyclopedia’s five-page section on humor.

“When something’s horrible, if you don’t find some way to release it, it will dig at you,” Gottesman said. “Laughing releases the horror.”

Which is not to say that violence is a laughing matter. Gottesman walked away from the project with the deep conviction that a predilection for violence defines Americans as much as such often-touted values as freedom or liberty.

“Until recently when we looked at America we saw a big country, from sea to shining sea, full of cheerful, industrious people devoted to freedom and opportunities for all,” Gottesman said. “Now I see it as factory for violence of all kinds.”

Gottesman was surprised to find how often sculpture, dance and other arts express violent themes. He was also surprised to learn the number of guns in private hands (almost one for every American). And in his view, the most overblown source of violence is elevated levels of testosterone (“the causal link has not been established”).

“Those are the kinds of struggles built into an institution or country,” he explained. “It’s what happens if you don’t have two parents, enough income or proper medical attention or education.”

Such insight, of course, doesn’t come without a personal toll. Gottesman, who trained as a therapist but never practiced as one, emerged anguished by the single occasion when he lost his temper and spanked his son as a toddler.

Outside of his sense of obligation to Scribners, the project’s eight-member advisory board (including USC’s Laura A. Baker, an associate professor of psychology) and the encyclopedia’s contributors, Gottesman said only hope gave him the strength to persevere.

“The whole project was an attempt to make an intervention,” he said. “I thought maybe I could make a difference – to intervene in this long and multiply faceted history of violence in America. That is part of what kept me going.” Not-So-Fun Facts from ‘Violence in America’

• Proportion of violent crimes that are committed by offenders under the influence of alcohol: 1/3.

• How many times more likely a black 25-year-old male is to be stabbed or shot than his white counterpart: 9.

Researchers Track Violence From A to Z