With incidents of unarmed black men being killed by police officers refueling the “race conversation,” the USC School of Social Work focused its annual All School Day event on the theme “Race Relations in the 21st Century: Is It Just a Black and White Issue?”

“We now have a black president, and one of the wealthiest women in America is also black,” said Cherrie Short, associate dean of global and community initiatives, as the conversation began at Bovard Auditorium on Feb. 25. “Does this then mean that overall life chances have improved in society for people of color and their communities, or are we locked into a system that is very difficult to dismantle because of the past history?” 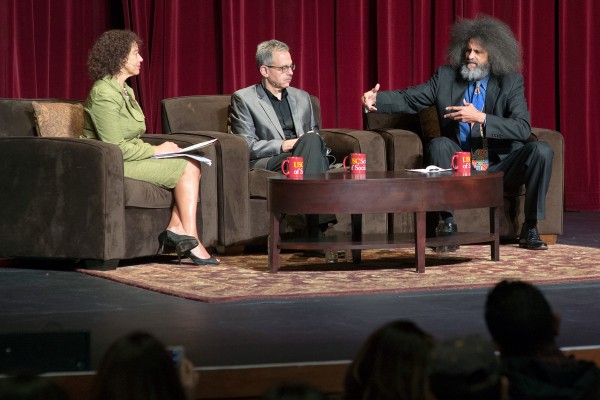 All School Day began in 1992 after racial tensions sparked the Los Angeles riots. Each year since, the School of Social Work has brought people together to discuss how society can better communicate across differences in race, gender, sexual orientation, religion, age, social class and disability.

“Regardless of what their exterior looks like or what their heritage is, we all want the same things. We have the same issues and the same challenges because we live in the same neighborhoods,” said Aja Brown, who is only the second African-American mayor of Compton and who has a Master of Planning degree from USC.

Citing the rapidly increasing numbers of ethnic and racial minorities in the United States, she urged an action plan for change.

“The new majority will have the same choice to make – whether or not to continue the cycle of exclusion and hate,” she said. “It’s going to be an all hands-on-deck approach, and the key caveat can’t be race again. We have to do better.”

“We need to create spaces where we can be honest with one another,” he said. “We always need to act as if ‘the other’ is there, even if ‘the other’ is not. We need to speak and act with integrity, honesty and courage, and move this needle forward on social justice and race relations.”

USC Gould Professor Jody Armour mentioned that the tenets of his 1997 book, Negrophobia and Reasonable Racism: The Hidden Costs of Being Black in America, still hold true today – that it is not reasonable to judge an entire group by the actions of a few.

“Ain’t nothing changed but the year,” he said.

He implored the audience not to look for blame but to come together to combat discrimination.

The All School Day committee also honored Ralph Fertig, clinical professor at the School of Social Work, for a lifetime dedicated to social justice. Fertig, who as a Freedom Rider in the 1960s was jailed and beaten in Selma, Ala., for his efforts to integrate public buses, extolled USC for its commitment to diversity.

“We have a heritage at USC to stand up and fight for equality, for equity,” he said. “The articles of incorporation specified that all classes will be offered equally to women and to men in 1880, almost a century before Harvard University opened up to women. So USC has been at the forefront, and I’ve been proud to have been a part of USC.”

“As the school has grown and become national in scope, now when we take up this topic, we’re thinking of the nation as a whole,” she said.

“You are a voice of 3,000 for social justice. It’s your responsibility to keep this dialogue going in the nation as a whole and to reinvent for ourselves what Martin Luther King Jr. started.”

Manuel Pastor pledges himself to civility and social change

USC Dornsife professor is installed as the first holder of the Turpanjian Chair.

Minorities are expected to more than double their population in the next 40 years, D.C.-based senior fellow tells USC Price students.

Many Trojans spend the week volunteering or doing research around the country and overseas.