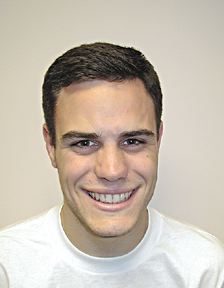 When Tim Mechlinski was inducted into USC’s Order of the Torch, team members from L.A. Speed were there to support him.

When Tim Mechlinski crosses the finish line in the upcoming L.A. Marathon, hoofing 26.2 miles will be the least of his accomplishments.

For the past four years, the USC senior has helped train a team of neighborhood teens for the annual event, which takes place March 5.

That has meant running six to eight miles four nights a week and up to 18 miles on a single weekend day with 15 elementary, middle and high school students.

After the workouts – or on days when the team doesn’t practice – Mechlinski, a double major in sociology and French, along with team co-coach Maria Marquez, helps the students with their homework.

“It hasn’t been hard, and it hasn’t been stressful,” Mechlinski insisted in a recent interview. “It’s made it possible for me learn so much about the community.”

Mechlinski and Marquez, who both ran track in high school, linked up while working as playground supervisors at John Adams Middle School on Broadway and 30th Street. All but one of the team’s members graduated from the school. Mostly the sons and daughters of Latino immigrants employed in the garment district, the teens live two to three miles northeast of campus. One of the team members has seen six friends who aren’t runners go to jail.

“I feel so lucky,” said Metropolitan High School senior Reno Alfaro. “I lost weight, I have new friends and I keep off the street.”

L.A. Speed – as the team calls itself – is just one of 159 teams supported by Students Run L.A., which provides free shoes and exercise outfits to the young marathoners.

But the benefits of the Students Run L.A. program, which involves 2,000 students in 80 schools in struggling neighborhoods, goes well beyond the freebies.

“It gives you a sense of achievement,” said Alfaro, who will be running in his second marathon. “It make me feel capable – like I’m good at something.”

When Omar Garcia comes home from school at about 4 p.m., he knows he has only about 2 1/2 hours to devote to his homework before Mechlinski or Marquez pick him up.

“If I didn’t know they were coming, I’d lie down or play videos,” said the Jefferson High School senior. “It puts me to work.”

Mechlinski said he has come to view the team as an extended family. A Maryland native of Polish and Italian extraction, Mechlinski calculates that he’s attended four quincineras, the formal celebrations marking the 15th birthday of a Latina. Before coming to USC, Mechlinski had never heard of the tradition.

“I think they’ve learned that someone’s there for them,” said Marquez, who hopes to attend USC’s School of Social Work next fall.

The young runners have returned the favor. When Mechlinski was recently inducted into USC’s Order of the Torch – an honor society – several team members were in the audience.

“I was so proud to know that they were there to support me,” Mechlinski said.