The experience of Chinese immigrants at Angel Island in San Francisco Bay served as inspiration for new poems in The Tribute Horse (Nightboat Books, 2014). The book, which Brandon Som PhD ’14 wrote as his doctoral project at USC, has been awarded the Kate Tufts Discovery Award, given to poets who show great promise.

“It was a huge surprise, a great honor and thrill,” said Som, a lecturer in the writing program at the USC Dornsife College of Letters, Arts and Sciences, of winning the award.   “I’ve taught books in my own creative writing classes by amazing poets like Yona Harvey and Artsuro Riley, who have been honored with this prize, so it just blows my mind that my work is joining theirs in this series.”

Som said he was grateful for the $10,000 prize that will give him more time to write and for his mentors at USC Dornsife who supported him along the way.

The poets on the faculty here were instrumental in helping me create this collection of poems.

“The poets on the faculty here — Mark Irwin, David St. John, Carol Muske-Dukes and Susan McCabe — have wonderful vision and were instrumental in helping me create this collection of poems,” said Som, who earned his Ph.D. in creative writing and literature.

“Elegant and precise, delicate and wise, Brandon’s poetry looks to the sound inscriptions of our histories, both personal and cultural, and asks how poets might make physical — and lasting — the nuances of our breath,” wrote St. John, professor of English and comparative literature, for the cover of the first edition. 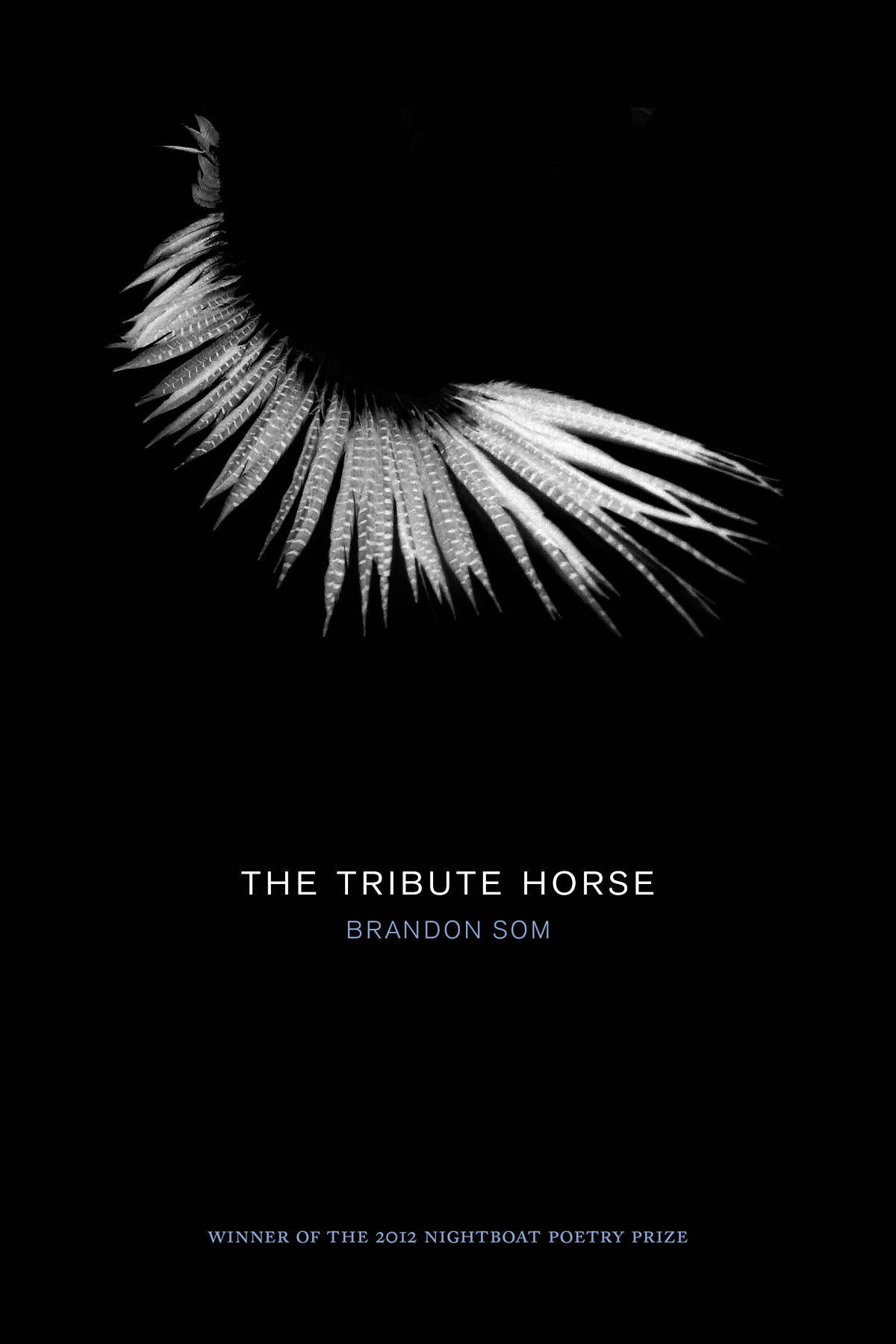 At the heart of The Tribute Horse is Som’s Chinese grandfather, who used a false name and identity to enter the United States in 1928.

Som was drawn to the poems of Angel Island for reasons close to his own heart: His grandfather, Yow C. Som, passed through the immigration and detention center in 1928. Like many Chinese immigrants of the time, Som’s grandfather was a paper son — the name given to those who tried to circumvent the 1882 Chinese Exclusion Act by falsely claiming kin with Chinese Americans who had already established U.S. citizenship.

“That’s how Chinese immigrants were able to get into the country, through this subversive act,” Som said. “The book engages with the history of paper sons and the history of immigration through Angel Island in order to better understand the complexities of identity and its formation. My poems reflect upon the ways in which identity is an ongoing process contingent upon many factors and forces, and how language, both spoken and written, is essential to that process.”

Som, who had long been fascinated by Angel Island, where Chinese immigrants were once detained and interrogated — sometimes for months as they waited to learn their fates — found a 1960s Folkways recording of a man reciting a celebrated poem by Chinese poet Li Po that had been carved into the walls of the immigration center by a detainee.

“The poem is in Mandarin, which I neither understand nor speak. I listened to it many times and made a sound translation of the poem, finding English words to match the cadence and sound of individual words,” Som said.

This sound translation served as the inspiration for several of Som’s poems and echoes the experience of Chinese immigrants in the transliteration of their own Chinese names into English as they crossed the border into the United States.

“I was fascinated by the idea that a moment of transliteration shaped the way names and language change across borders and what that means for our identities,” Som said.

Before leaving China, paper sons were often given “coaching papers,” a crib sheet of notes to assist them during their interrogations by immigration officials.

“I was riveted by how immigrants studied these coaching papers on their passages over and then threw them overboard so they would not be caught with them upon arrival. My book is obsessed with that paper trail and the loss of sound that happened as a result.

“The book works with the words of others, with poems that came before me and with historical text. This was purposeful because paper sons worked with the identities of others, reciting names and identities of people who weren’t necessarily their own. This book mirrors that aspect of the history and of our identities. It’s an amalgamation, an assemblage of many voices.”

As the architect of his poetry, Som describes his desk as a construction site.

“I see language and words as materials,” he said. “I collect things like a magpie building its nest. I keep a journal, and I’m always writing things down — simple, sensory observations, metaphors and images that play with sound, with language. I try to sit down with those things and see what I can build by bringing language together to create something resonant, luminous and surprising that ultimately helps me to think differently.”

The book is named for a Chinese handscroll Som saw in the Metropolitan Museum of Art in New York.

“I stumbled across the phrase ‘The Tribute Horse’ describing individuals in the painting who were taking a horse as a gift to the emperor. I walked around for years with that phrase in my mind,” Som said.

“I like the way the book begins with paper in the form of the coaching papers and ‘The Tribute Horse,’ which is the last poem in the book, brings it around full circle to focus on paper once again, thereby highlighting the role of writing and calligraphy.

“I’m also interested in making poems that focus on sound, how it’s another way of perceiving the world and how sound allows us to think differently about it,” Som said. “Sound is the way I try to link words together.”

At the heart of The Tribute Horse is Som’s Chinese grandfather and the fact that he used a false last name and identity to enter the United States.

“These issues of immigration, of inclusion and exclusion, are still very much with us today,” Som said.

“The Chinese Exclusion Act at the heart of this book of poems were the first immigration laws of this country. I hope these poems engage with that history and inspire others to read it and see how it’s connected to our present world.”

“White Key,” a poem by California Poet Laureate Carol Muske-Dukes of the USC Dornsife College of Letters, Arts and Sciences, has been set to music by Yale University composer Reena Esmail and will be performed by the famous Volti voice ensemble of 20 professional chorale singers in San Francisco on March 2, 3 and 4.

The Gioia of poetry

“La Vie Bohéme” may be romantic, but even poets need to eat. Solving that dilemma is something many artists don’t give ample consideration early in their lives, said Dana Gioia.