It was late September in Oklahoma, and 10-year-old Little League pitcher Alex Coker was taking the mound for the first time since brain surgery.

The sounds of the ballpark surrounded him — a fist hitting a glove, chants of “hey batter, batter,” cheers from the crowd.

Alex could hear all those sounds thanks to the perseverance of his mother, Susan Bennett, and the skill of his doctors at Keck Medicine of USC.

Alex’s surgery just a couple of months before had involved the removal of a tumor called an acoustic neuroma from his right auditory nerve. Common early symptoms include hearing loss, tinnitus (ringing in the ears) and problems with balance, said Rick Friedman, director of the USC Acoustic Neuroma Center, a professor of otolaryngology and neurosurgery at the Keck School of Medicine of USC, and division director of otology, neurotology and skull base surgery.

In Alex’s case, it wasn’t symptoms that led to the diagnosis. Because his biological father had been previously diagnosed with Neurofibromatosis Type 2 (NF2), Alex was at risk of inheriting the rare genetic mutation characterized by growth of non-cancerous tumors in the nervous system.

Alex’s tumor was discovered during a precautionary MRI screening.  Bennett, a registered nurse, took Alex to his first brain scan at age 5, but she struggled to develop a concrete plan for observation of her son.

“There is very little information on the most effective way to monitor at-risk children born to a parent with NF2,” she said.

So she insisted on hearing screenings and regular visits with medical specialists in an effort to detect problems as early as possible. Soon after the MRI that revealed that Alex had an acoustic neuroma, an audiogram showed a slight high-frequency loss in his right ear.

Bennett reached out to the USC Acoustic Neuroma Center to discuss treatment options.

Friedman, along with Steven Giannotta and the acoustics neuroma team, recommended surgical removal of Alex’s tumor as soon as possible to save his hearing for the longer term.

But Bennett and her husband, Jared, had received a “wait and see” recommendation from other doctors, and no parents want their child to undergo brain surgery. As they struggled with a decision that Bennett recalled as heart wrenching, Alex happened to overhear. 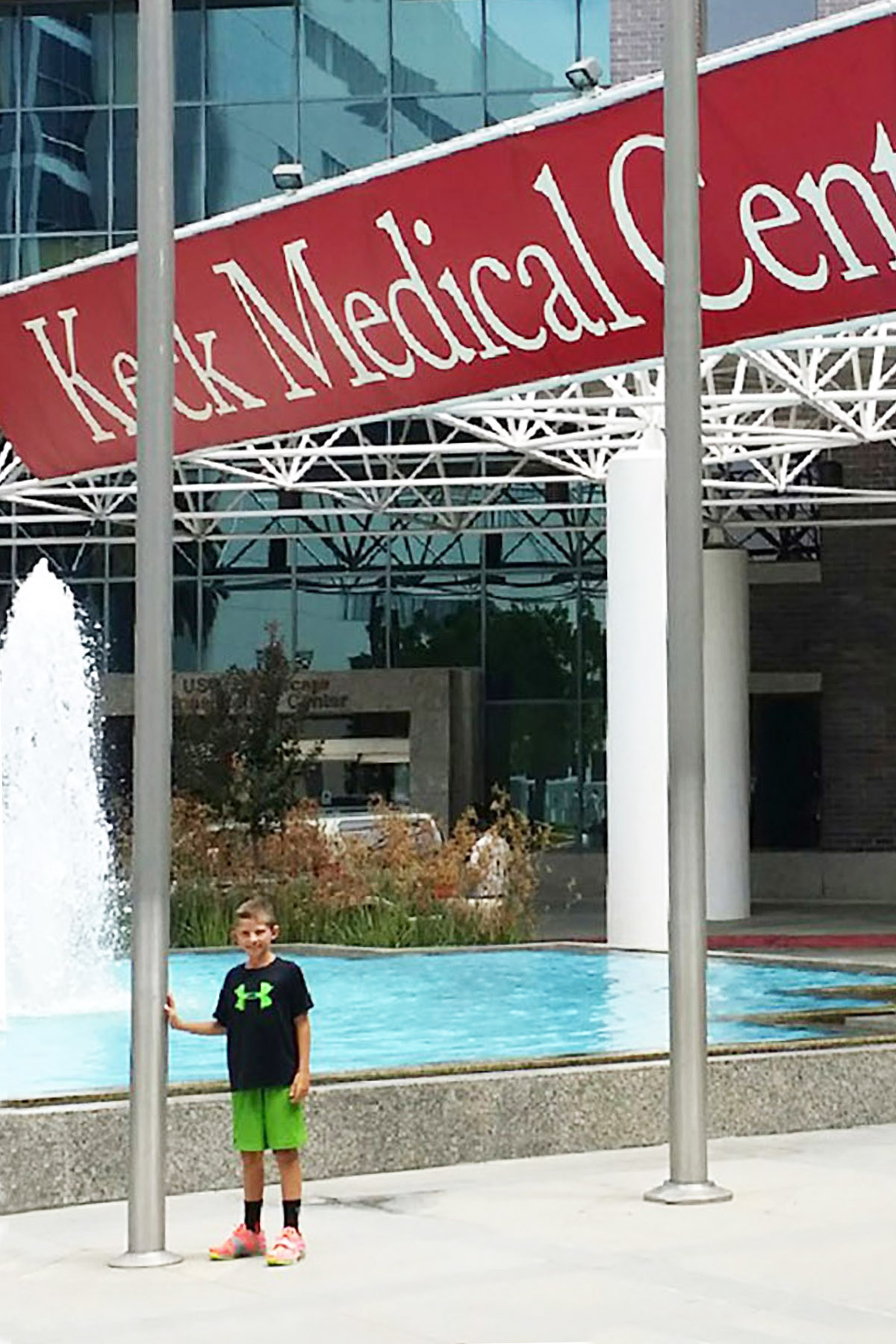 “Mommy, I’m not scared,” Bennett recalled him saying. “I want to save my hearing. I want to go to Los Angeles.”

The surgery, a middle fossa craniotomy with microscopic excision, took place in July 2014. It was performed by Friedman and Giannotta, chair of neurological surgery at Keck Medicine of USC.

“During the 3½-hour procedure, I discovered additional tumors tangled within the patient’s vestibular and facial nerves,” Friedman recalled.

As a result, the two surgeons had to delicately remove all the tumors, not just the one they had expected.

Although this was one of my most complex cases, we were able to remove the tumors with no post-operative hearing loss or facial weakness.

“Although this was one of my most complex cases,” Friedman said, “we were able to remove the tumors with no post-operative hearing loss or facial weakness.”

Bennett said about her reaction at the time: “I was in disbelief at the news. I was speechless. All I could say was thank you!”

She hopes her family’s story will empower other parents to advocate on behalf of their children and encourage them to seek a medical team they truly trust.

“The compassion that Dr. Friedman has for his patients is few and far between,” she said. “What he has done for Alex is amazing.”

Just two days after surgery, Alex was walking again. Within two months, he was back to playing soccer, earning good grades at school and pitching a baseball.

How did Alex do when he pitched his first game after surgery?

No hits, no walks and one strikeout. Most importantly, he was able to hear his family’s cheers, smile wide with pride and just get back to being a 10-year-old boy again.

Sound barrier broken for children born without a hearing nerve

Thanks to USC surgeons, Little Leaguer is back in the game