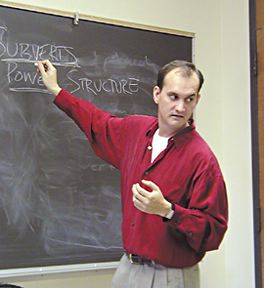 Thomas Dean Cantwell: “I know for a lot of people the college track isn’t a straight one, and they may need extra encouragement.”

Thomas Dean Cantwell, who has been selected as USC’s Outstanding Teaching Assistant of 2000, dropped out of high school at 17.

Even after receiving a GED and enrolling in college, he wasn’t out of the academic woods. As his mother waged an un successful battle with cancer, his undergraduate education drag ged on for nine long years.

Today the third-year graduate student in history credits his own checkered academic past with inspiring him to go the extra mile in his three years as a TA.

“I know for a lot of people the college track isn’t a straight one, and they may need extra encouragement,” said Cantwell, who conducts study sessions for the “Emergence of Modern Europe.”

Cantwell is believed to be the first high school dropout to receive the coveted award that recognizes “consistent excellence in the classroom.”

“Award winners in the past have had strong academic backgrounds with no gaps, so I would be surprised if any had a situation like his,” said Danielle Mihram, director of the Center for Excellence in Teaching. CET sponsors the award.

Cantwell is also is the first history TA to receive the honor, which more often than not goes to graduate students in mathematics and natural sciences. He also received more student recommendations than any applicant in the 10-year history of the award, which comes with a $1,000 prize.

“We received 12 letters from former students,” Mihram said. “Usually, we get four or five – at the most, a half-dozen. And his letters didn’t just say, ‘He’s great.’ They were very detailed, saying things like ‘He was always there for me,’ or ‘He really made a difference.’ He must be just this side of perfect.”

“Enthusiastic, thorough, accessible to students, organized, knowledgeable, encouraged participation – he was the best,” is how a student summed up sentiments about Cantwell last spring. “I can’t imagine a better teacher, honestly!” wrote another student. Asked how their instructor “might improve his effectiveness,” most students were stumped. “He can’t,” a student wrote last fall. “He rules.” Another classmate, nonetheless, had an idea: “Give him a whole classroom and see what he can do.”

Cantwell chalks up his success to building personal relationships with students and relying heavily on the latest in technological advancements to do so.

“When I was an under graduate, the professors who I felt knew me inspired me to great heights of achievement,” Cantwell said. “I realized that’s something I wanted to do as teacher. The ones who didn’t know me, I thought, why bother?”

The process begins on the first day of class. While some faculty give lip service to learning all of their students’ names, Cantwell actually does. He gives students his cell phone number and encourages them to use it any time. He also relies on ICQ software – an instant Internet messaging service popular among students – so they can quickly ascertain whether he’s online and take advantage of his availability.

“None of this requires much more effort than traditional means of communication between students and teachers, but it creates a rapport that is invaluable,” Cantwell wrote in a statement of his teaching philosophy.

In addition, he requires students to e-mail an informal, paragraph-long personal reaction to the week’s reading assignment. The assignment is due at midnight the night before his study session. He then rushes to read the responses before class.

“It’s three extra hours of work [for me], but it pays off.” Cantwell said. “Most students aren’t brave enough to raise their hands in class. They’re afraid of being stupid or wrong. But because I know personally how they think, I can validate them in class. I’ll say, ‘Rudy, you said something interesting in your e-mail. Why don’t you tell the class what it was?’”

While his experiences as a student provided him with insight into the importance of good teaching, Cant well credits Terry Seip, an associate professor of history and the department’s official trainer of teaching assistants, with showing him some valuable tricks of the trade. The author of a pamphlet on TA education titled “Shall Gladly Teach: Preparing History Graduate Students,” just published by the American Historical Association, Seip is an award-winning teacher in his own right. In 1997, he received the Nancy Lyman Koelker Mentorship Award for Undergraduate Teaching, which is the highest teaching honor given by the American Historical Association.

It also helps that Cantwell views his TA responsibilities as job training. An aspiring professor, Cantwell plans to ride the new wave of interest in interdisciplinary legal scholarship to a tenured position in a law school. To that end, he plans to start law school next fall. By that time, he hopes to have completed the qualifying exams for his doctorate. After completing his J.D., he hopes to write his doctoral thesis, probably on a theme relating his background in history to law.

Then, if all goes according to plan, Cantwell will get a whole classroom to himself and see what he can do.