As climate change and resource depletion come under increasing scrutiny, Gavin Garrison ’12 produces documentaries highlighting eco-disasters around the globe, from the Costa Concordia disaster to worsening pollution problems in Beijing.

A producer for Animal Planet’s Whale Wars, Garrison shared his firsthand look at filming in Antarctica on the front lines of one of the world’s most enduring eco-battles.

How did you become involved with Whale Wars?

I became involved right before I graduated in 2012. Whale Wars is a docu-series on Animal Planet that follows a group of eco-activists as they endeavor to stop whale poachers operating off the coast of Antarctica. The lead producer of the show was looking to hire a new producer for the sixth season and had contacted my friend, Louie Psihoyos, the Academy Award-winning director of The Cove, in search of a recommendation. I got a call a few days later from a salty-sounding Australian asking if I could be on a flight to New Zealand the next morning to set sail for Antarctica. I seized the opportunity.

As producer, what were your responsibilities on and off the set?

My job was to capture the real-life action and drama aboard three ships whose missions were to protect whales from being poached off the coast of Antarctica. The whalers have massive, floating slaughterhouses that they send to Antarctica to seize whales by the hundreds — up to 1,000 a season without intervention.

Last season, we were at sea for a formidable 100 days. A typical day consisted of coordinating crew scheduling, resolving conflicts, conducting on-camera interviews, building character and story arcs, reviewing footage and coordinating with the other ships. In addition to producing, I occasionally stepped in to shoot if a cameraperson was out of commission or if we needed another angle on a critical moment.

What were some of the biggest challenges you encountered? 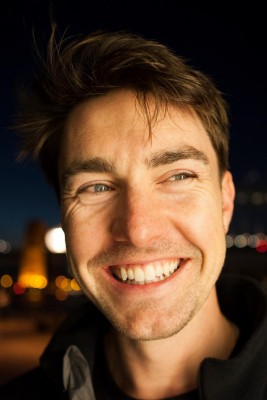 Negotiating! The minute I came on, I had to start negotiating crew rates, gear discounts, travel plans and so on. Even though I would consider this typical for a producer, I felt the stakes were higher than usual because we were operating on razor-thin budgets for work we needed to perform in one of the most inhospitable locations on the planet.

Water was our biggest enemy in the field. When we leave port, we don’t know when we’re going to be back, so we have to bring third- and fourth-tier backups for all of our gear.

Food is also a big challenge while at sea. The ships are vegan, so that’s an immediate issue for some people. On top of that, when the galley runs out of fresh fruits and vegetables two weeks into the voyage, it results in a diet that’s mainly beans and rice.

We also were only allowed to shower for three minutes every three days, so that created some of its own problems.

How did you grow creatively during your time with the show?

The skill I’ve honed the most through producing on location is diplomacy. Being on the ships is challenging for so many reasons. I’m thrust into an environment where I have to deal with a production crew that’s seasick half the time, with people that have strong opinions and conflicting ideologies, and where I don’t have access to the Internet.

What advice do you have for current School of Cinematic Arts students and other SCA alumni?

The best piece of advice I have for my fellow Trojans is to get to know your classmates. This industry can feel very impersonal, especially if you’re freelancing. You hear about the “Trojan mafia,’ and I had always assumed that it would present itself to me at some point, maybe with a Skull & Bones-type envelope pegged to my door. In reality, the mafia is the intense loyalty you feel for your fellow Trojans. It’s that ping you feel when you see someone donning a USC sweatshirt. In a place like Los Angeles, which is renowned for feeling a little disconnected, the relationships you build with your fellow Trojans can make a world of difference.

What’s next for you?

If everything goes according to plan, I’ll soon be off in another corner of the world, telling a new, untold story.

From Falling Skies to Sleepy Hollow: A Trojan turns to TV

Alumna hit the ground running after graduation and found a niche writing for two prime-time hits.

Alumna discovers the power of filmmaking

Sarah Choi produces The Drop Box, a documentary about a man taking in unwanted babies in South Korea.

Could TV use a female MacGyver? Here’s how to fix that (sans duct tape)

USC Viterbi collaborates on crowdsourcing competition enlisting Hollywood producers to create a show that would inspire women to be engineers.

USC classes lift the curtain on Hollywood’s wheeling and dealing

Looks at talent transactions, movie marketing and much more give students a taste of what life is like beyond the industry’s glitz and glamour.