The USC Price School of Public Policy is making a significant investment into expanding the visualization of public policy and urban planning with the launch of a Spatial Analysis Teaching Laboratory (SATLAB) and a Spatial Analysis Lab (SLAB) for research, aiming to experiment with multimedia sights and sounds to bring attention to overlooked urban spaces and people.

The use of visual tools is an innovative way to enhance the school’s commitment to social justice and equity.

Incorporating pictures, video and audio bites, multimedia spatial analysis can create a map of an urban environment that reveals its people and places from different angles, engaging the senses to reach a wider audience than traditional academic research. It can be as if you’re walking through a city, hearing people’s stories and conversations.

“We’ve been working to develop the capacity and resources within the Price School to support research with a spatial component,” said Genevieve Giuliano, senior associate dean for research and technology. “People live in cities and interact across space, so the whole concept of thinking about the things we do in this school from a spatial perspective makes a lot of sense.”

USC Price brought in Associate Professor Annette Kim to direct SLAB, which she originated at the Massachusetts Institute of Technology. Kim is also teaching the first class in the SATLAB this spring, a course titled “Urban Spatial Ethnography and Critical Cartography.”

We want to be recognized for a multidisciplinary and multidimensional way of studying urban phenomena, as well as public policy.

“We want all of our students to be routinely spatially informed and skilled, so that everybody knows how to map and portray images,” Giuliano said. “We want to be recognized for a multidisciplinary and multidimensional way of studying urban phenomena, as well as public policy.”

SLAB has launched a website to showcase projects, provide information about the lab, future exhibitions and symposia, and serve as an introduction to spatial analysis for the public and interested students.

“Dean Jack Knott’s leadership and support is allowing us to take our work to the next level and make a larger contribution,” Kim said. “And then the amazing collaborative spirit of the schools and centers around campus, which have unparalleled strengths in cinematic visualization and communication, are synergizing with the Price School’s expertise in public policy and public engagement, urbanization and immigration issues.”

For example, the school is mounting a group exhibition this fall at the USC School of Cinematic Arts gallery showing work that uses digital media to revisualize the diverse city, noted Kim, who added that her aim is to advance the visualization of the social sciences.

SLAB’s Associate Director Kristy H.A. Kang PhD ’13, designated by Adobe as an education leader, has been instrumental in setting up SATLAB and the new spring course, as well as in helping design SLAB’s website.

Kim noticed the work Kang was doing for the Labyrinth Project, a research initiative on interactive narrative and digital scholarship at the USC School of Cinematic Arts. Although Kang didn’t have a policy or planning background, her dissertation project, for which she received a Ph.D. from the Media Arts and Practice Program at SCA, involved urban mapping by looking at the diverse ethnic community in L.A.’s Koreatown.

“It was an interesting opportunity when Dr. Kim proposed I work with her to bridge cinematic narrative and new media within the realm of public policy and urban planning,” Kang said. “We have a mutual interest in urban spaces, immigrant communities and storytelling, and I thought it would be exciting to see what we could do together.” 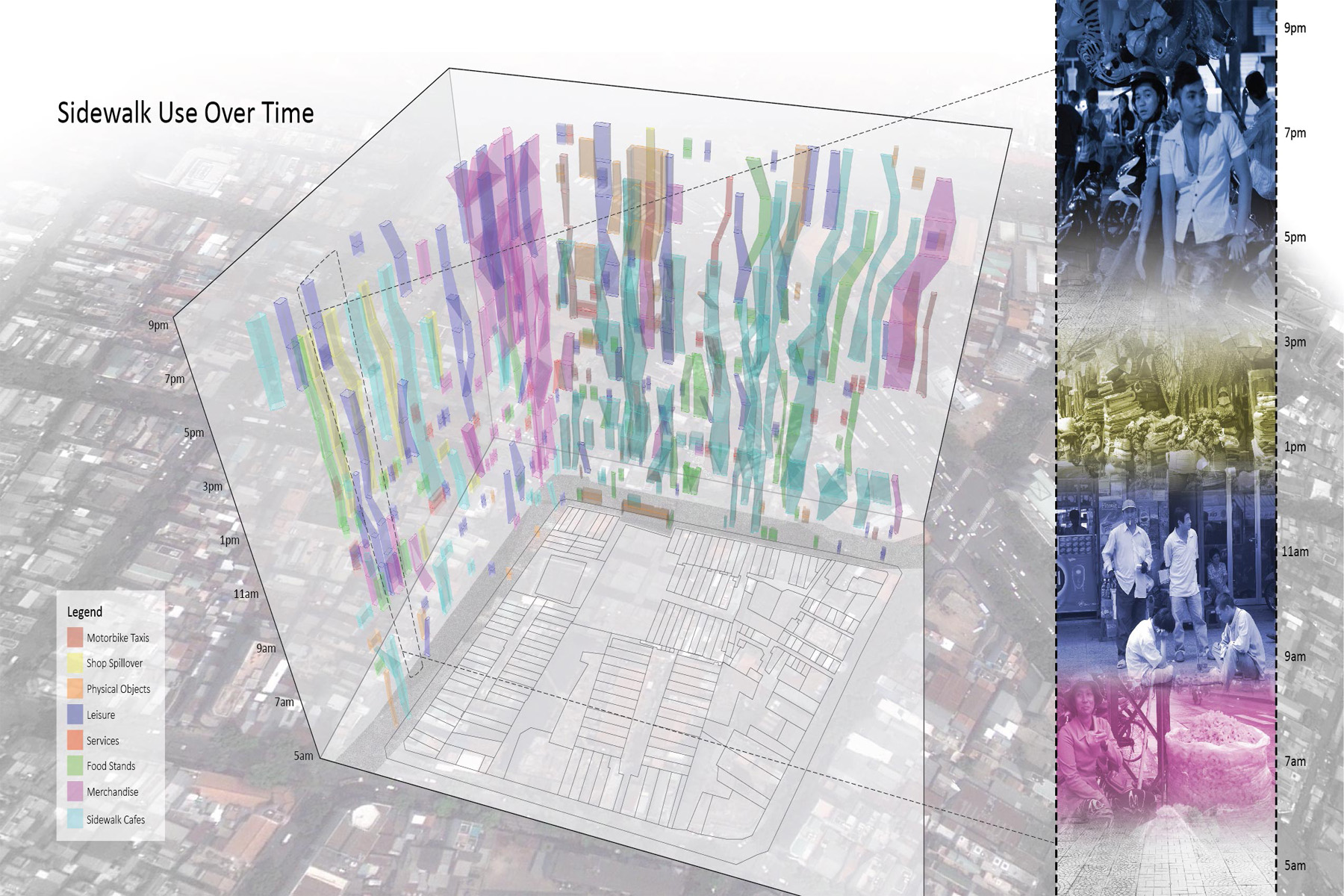 Analysis found sidewalks can be a mixed-use space in which different people take turns using the space over the course of a day. (Courtesy of Annette Kim)

That Koreatown collaboration is among the projects to be featured by SLAB, along with work Kim has done on sidewalk life in Vietnam’s Ho Chi Minh City and the phenomenon of 100 million people living in underground bomb shelters in Beijing.

It was in researching Vietnam that Kim’s interest in spatial analysis began, primarily out of necessity. Since data is often non-existent or of poor quality, she started creating her own data by commissioning a satellite to take photos of Ho Chi Minh City and developing an algorithm to detect informal land development from those images.

I now realize that a common theme in all my research is to recover data about ubiquitous but overlooked phenomenon.

“I now realize that a common theme in all my research is to recover data about ubiquitous but overlooked phenomenon,” she said.

Kim received her B.A. in architecture and studio art from Wellesley College, a master in public policy and urban planning from Harvard University, and a master in visual studies and a Ph.D. in city and regional planning at the University of California, Berkeley.

Bringing together all of those areas of study, her sidewalk project involved collecting field surveys coded into GIS databases of everything happening on the sidewalks, as well as photographs, interviews and video.

The research led to a book of experimental maps to be published in May and a series of public exhibitions showcasing photographs and digital video installations that became a national discussion piece in Vietnam about the role of street vendors in the city.

“This integrative way of working is like a dream come true,” Kim said. “I can finally bring together these different elements that were in me — bring the art and science together — to better explain what was going on with the sidewalk life in Ho Chi Minh City. It has opened up a whole field of exciting work for me.”

Matthew Miller, a Ph.D. student in urban planning and development at USC Price, will assist in advancing SLAB’s work. He was a student of Kim’s while pursuing his master in city planning at MIT, though it wasn’t until after he received his acceptance to USC that he learned Kim would be teaching at USC Price.

Miller said he was enthusiastic about the opportunity to work more closely with Kim on the SLAB research initiative.

“I’m interested in community economic development and spatial justice; she is known for being able to reinterpret geographical space in a way that gives more attention to people and issues of humanity and public life,” he noted. “Her focus on how to pay more attention on the qualitative aspects of public space meshes well with my interests in trying to understand how inequality manifests itself in neighborhoods.”

“It’s exciting to see Price prioritize mapping,” said Matthew Gonzalez, a master of public policy student. “So many of the decisions we make as policy analysts or planners function on these geographical spaces, and spatial analysis with interactive mapping really moves us forward to do the type of analysis of citizen engagement that wasn’t possible before.”

A bird’s-eye view of spatial sciences

A balloon launch at USC was one of many events across the globe celebrating GIS Day and raising awareness of geographic information systems.