A majority of California voters say the University of California system should avoid raising tuition by cutting spending and managing its resources more wisely – a position held by Gov. Jerry Brown in recent budget negotiations, according to results from the USC Dornsife/Los Angeles Times Poll.

When asked to choose between two statements, 57 percent of voters agreed with Brown’s stance that “rather than raise tuition on students and families, the UC system needs to cut spending, limit executive pay raises and offer more online classes to maximize the hundreds of millions of dollars it receives each year from California taxpayers.” Thirty-two percent of voters agreed with a statement representing UC President Janet Napolitano’s stance that the UC system is receiving $460 million less funding than in past years even as it educates more students, and needs more state money “to maintain its status as the best public university system in the country.” 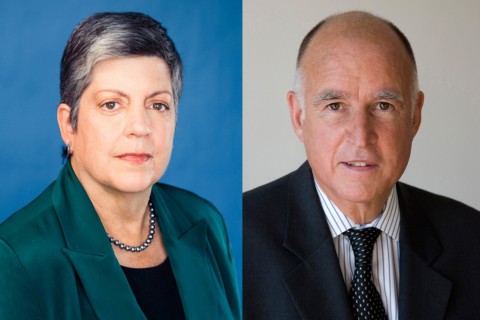 Janet Napolitano and Jerry Brown have clashed over funding for the University of California system.

Napolitano and Brown have clashed in recent months over funding for the UC campuses: Napolitano proposed raising tuition by as much as 5 percent each year for the next five years if Brown and the Legislature did not provide additional funding. Brown had promised a smaller budget increase but on the condition that tuition stay flat.

“Napolitano’s position may not be nearly as strong as she thinks it was,” said Dan Schnur, director of the USC Dornsife/Los Angeles Times Poll and executive director of the Unruh Institute of Politics of USC. “There’s no question that a tuition increase sets off alarm bells for voters, especially because of what they’ve experienced over the past few years. Voters share Gov. Brown’s suspicion that there are ways to provide a high quality product to students without automatically increasing costs.”

Said Drew Lieberman, vice president of Democratic polling firm Greenberg Quinlan Rosner Research: “Gov. Brown is clearly negotiating from a position of power in this debate. The cost of college is such a burden for so many people right now, they are willing to sacrifice some of the quality and access just to lower the cost. Californians are asking the question if it’s worth continuing to invest in the UCs if it’s going to end up being completely out of reach for them, anyway.”

“Gov. Brown’s success at turning around the state’s finances has given him capital with California voters who feel that the UC system needs to live within its means rather than hike tuition,” said Matt Rodriguez, a distinguished Unruh Institute fellow and Democratic strategist.

Added Michael Madrid, a distinguished Unruh Institute fellow and Republican strategist: “While 68 percent of respondents believe that California is doing a poor job of being able to afford college, those same respondents do not want to see tuition increases on UC students. Californians are siding with Gov. Brown in this current funding dispute but also think the state government is doing a poor job of ensuring access to a higher education generally.”

The latest USC Dornsife/Los Angeles Times Poll, the largest statewide survey of registered voters, was conducted Feb. 18-24 and includes a significant oversample of Latino voters as well as one of the most robust cell phone samples in the state. The full sample of 1,505 registered voters has a margin of error of +/- 2.7 percentage points.

Conducted at regular intervals throughout the year, the USC Dornsife/Los Angeles Times Poll is one of the largest polls of registered voters in the state and has been widely cited, helping to inform the public and to encourage discourse on key political and policy issues.

About the Los Angeles Times: The Los Angeles Times is the largest metropolitan daily newspaper in the country, with a daily readership of 2 million and 3 million on Sunday, and a combined print and interactive local weekly audience of 4.5 million. The fast-growing latimes.com draws over 10 million unique visitors monthly.

USC Dornsife/LA Times poll shows the former mayor, who decided not to run for Barbara Boxer’s Senate seat, was nearly 10 points behind the attorney general.

In the 37th annual Pullias Lecture, the University of California president puts tuition in a wider context of the state system’s tradition of innovation.

For the third year, the university ranks among the schools with the most students in the prestigious program.

Californians side with Jerry Brown in UC tuition dispute