It sounds like something straight out of science fiction: Robots zap the danger surrounding them.

But for Keck Medical Center of USC, the new devices are powerful tools in the fight against the spread of disease and infection.

Xenex ultraviolet robots, which stand about 5 feet tall and emit pulses of ultraviolet light to render bacteria and viruses inactive, were recently deployed in Keck Hospital of USC and the USC Norris Comprehensive Cancer Center.

This provides a new level of disinfection that we could not normally achieve.

“My passion is in reducing infection rates, especially for bacteria that are hard to manage,” said Chief Medical Officer Stephanie Hall. “This provides a new level of disinfection that we could not normally achieve.”

Manufactured by San Antonio-based Xenex Disinfection Services, the robots are used by more than 300 U.S. hospitals.

Pathogens can pose significant health risks, and disinfection of hospital surfaces is crucial for patient safety. About one in 25 U.S. hospital patients have had a health care-associated infection, according to the Centers for Disease Control and Prevention. 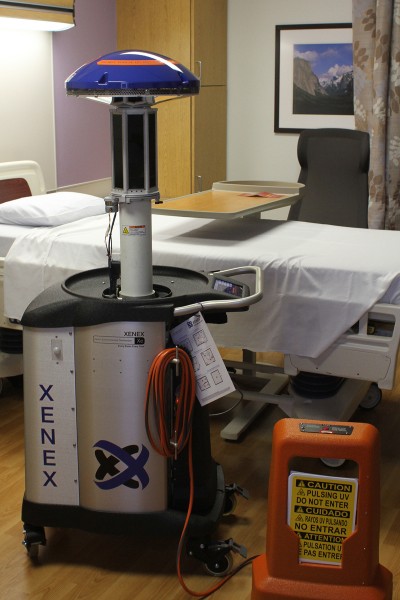 Xenex robots use powerful pulses of Xenon-based ultraviolet light that penetrate cell walls of bacteria and viruses, making them no longer infectious. The UV-C light can kill pathogens such as Ebola, measles and mold.

Purchase of a Xenex robot for Keck Hospital and the Norris cancer center was made possible by gifts from Paula Hsu and her family in appreciation for the extraordinary care that her mother received.

“Our family is forever grateful to Dr. Stephanie Hall and especially Dr. Glen Ault for the care rendered to my mother at the hospital a few years ago,” Hsu said. “Today, at 94, she is well and sound. When Dr. Hall mentioned this new disinfecting equipment to us, we felt privileged to be able to show our gratitude by contributing.”

Staff members underwent training with the Xenex robot after it arrived on Feb. 17 at Keck Hospital of USC.

“This enhances the level of disinfection we’re able to provide,” said Angie Ghanem, an infection preventionist.

A Xenex robot has been in use since December at the Center for Cystic Fibrosis. It was purchased with financial gifts from the Webb Foundation and Steven Tyre, trustee of the Bob and Margrit Gold Trust.

Although brief exposure to the light is considered safe, the robots are used in unoccupied rooms and are equipped with a motion detector capable of shutting down the system if motion is detected. The UV light cannot penetrate glass, doors or plastic, nor will it damage supplies or equipment in the room being disinfected.

The robots, which have a simple user interface, are WiFi compatible and dispatch real-time data, will be used in addition to regular cleaning and will provide enhanced cleaning in targeted areas of patient units and procedure rooms. A Xenex robot takes about 15 minutes to disinfect a typical patient room.   Each device costs about $90,000.

A Xenex robot is used 18 times a day in the Cystic Fibrosis Clinic. Patients have been curious about the new machine roaming the halls with staff members.

“It has increased the sense of comfort in our patients,” said Center for Advanced Lung Disease Nurse Manager Debbie Benitez. “They feel we are going above and beyond what we need to do for their safety.”

Three degrees in five years: It’s all in the family for this USC grad

Opportunity and mentoring were high points at USC for Ali Sahimi, who was inspired by his family’s medical history and record of academic achievement.

When Abby Giron was diagnosed with in utero spina bifida, her family was distraught. Then Ramen Chmait’s innovative surgery changed everything.