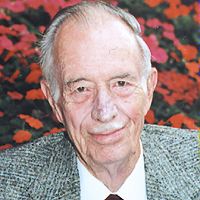 Adamson, seen here in 1999, was an emeritus professor of chemistry in the USC College.

Arthur Adamson, emeritus professor of chemistry in the USC College of Letters, Arts & Sciences, died on July 22. He was 84.

With a bachelor of science degree from UC Berkeley and a Ph.D. from the University of Chicago, he joined the USC faculty in 1946.

An inspirational teacher and a prolific writer, he has been called “the father of inorganic photochemistry” and is known for his textbooks about physical chemistry, and surface and colloid chemistry.

The recipient of numerous scientific awards for research and excellence in education (including many from USC), Adamson received three national American Chemical Society awards and a fourth was named in his honor. These awards span three distinct fields: inorganic photochemistry, surface chemistry and chemical education.

He authored more than 65 papers in the area of surface and colloid chemistry and published more than 140 papers about transport process and coordination chemistry.

Adamson was active in his community and church in Palos Verdes, Calif.

He is survived by Virginia, his wife of 61 years, three daughters, seven grandchildren and five great-grandchildren.