The Los Angeles Biotech Summit drew key policymakers, business figures and education leaders to talk about the future of the region. Among them:

Los Angeles city and county policymakers and educational institutions are laying the groundwork for the region’s biotechnology strategy at a summit today on the USC Health Sciences Campus.

The Los Angeles Biotech Summit draws leaders from business, academia and government to discuss ways to build the industry and, in turn, create more jobs.

Panel topics at the summit include job creation through university-spawned companies and economic and workforce development.

“As the Great Recession decimated U.S. job growth, one sector continued to thrive: biotechnology,” said USC President C. L. Max Nikias. “Encompassing everything from medical device manufacturing to biopharmaceutical development and diagnostic tools, this industry will no doubt from humanity’s most important advances in the 21st century.”

Nikias has called for an ecosystem in Los Angeles that fosters business, venture capital investment and access to academic medical centers for research and clinical trials. The summit underscores building momentum behind this push in Los Angeles County. 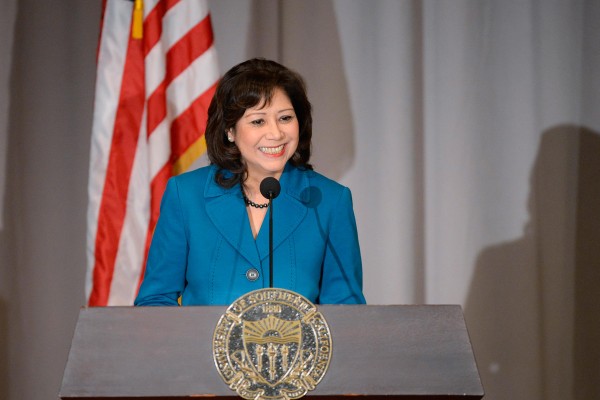 Today, about 38,000 people work in biotech jobs producing everything from medical equipment to pharmaceuticals in Los Angeles County, according to the Los Angeles Mayor’s Office of Economic and Workforce Development. But a concerted effort to launch and foster start-up companies growing from the region’s research institutions could significantly increase that number.

USC and other research universities in the area brought in nearly $2 billion in research dollars in 2010—the second-highest research expenditure total for any U.S. metro region—according to a Los Angeles County report on biotech. But often the discoveries made through this research are turned into new drugs or devices by companies located far away from Los Angeles. In the last 15 years, nearly 50 USC biotech-related start-up companies have headquartered themselves outside Los Angeles because of the city’s lack of infrastructure, Nikias said.

Fixing the brain drain and financial leak in local biotech

Cities like Chapel Hill, North Carolina, and Phoenix are smaller than Los Angeles, but they’ve cultivated successful biotech corridors that attract business and create jobs. In cities with a vibrant biotech business, biotech jobs account for as much as 3 percent of the workforce. In Los Angeles, about 1 percent of jobs are in biotech, according to the county report.

To counter the drain of potential biotech jobs and innovation, the Los Angeles County Board of Supervisors unanimously voted in November to develop a biotechnology framework for the region. As part of that effort, leaders propose building several biotech corridors across Los Angeles County.

If we get it right, the economic potential is enormous.

One of these corridors would sweep through east Los Angeles and use the Health Sciences Campus as an anchor—building on the intellectual, medical and community assets of the Keck School of Medicine of USC, LAC+USC Medical Center and local pharmaceutical firms.

“If we get it right, the economic potential is enormous,” Nikias said. “The initial Biotechnology Park is expected to create 3,000 construction jobs and nearly 4,000 permanent positions, from entry-level technicians to high-wage doctorate-level scientists.”

Nikias recently met with Supervisor Hilda Solis in advance of the summit to discuss their visions for the eastside corridor, and talks continue on building a broad-based coalition of educators, government and investors to push the project. He estimates that the entire corridor would be similar in size and scope to San Francisco’s Mission Bay project, which will employ 30,000 people once completed.

“All of the ingredients for Los Angeles to capture growth in this booming field are already here,” Nikias said. “With the right alignment between government, academia and industry, we can harness the region’s existing strengths — including our science graduates — to create lasting economic growth.”

Keck School neuroscientists have unlocked a piece of the puzzle in the fight against the debilitating neurological disorder that robs people of their motor skills.