Think of it as history in the making.

Paul Seaward, director of the History of Parliament Trust in London, was among several scholars who spoke at the first Linda and Harlan Martens Economic History Forum on Feb. 12 at Doheny Memorial Library.

An initiative of the USC-Huntington Early Modern Studies Institute (EMSI), housed at the USC Dornsife College of Letters, Arts and Sciences, the daylong event looked at how examining state finance and political accountability in 18th-century Britain and investigating economic developments from the early modern era can offer critical insights on contemporary economic issues.

In his opening remarks, Interim Provost Michael Quick thanked USC Dornsife alumni Linda and Harlan Martens for their generous support of the forum, noting that it holds great potential for positioning USC among the best institutions in the world for interdisciplinary economics and history research.

“We want the Martens Forum to be a focal point for bridging the humanities based at USC Dornsife and the Early Modern Studies Institute with our professional schools such as the USC Leventhal School of Accounting, the USC Marshall School of Business, the USC Price School of Public Policy and the USC Gould School of Law,” said Quick, senior vice president for academic affairs and professor of biological sciences. “Creating that kind of interdisciplinary interaction is what USC is all about.

This forum will also allow us to shed light on the importance of what we do as academics.

“This forum will also allow us to shed light on the importance of what we do as academics, the importance of discovery, observation and description of phenomenon so that it can be used for the basis to inform policy and future discovery.” 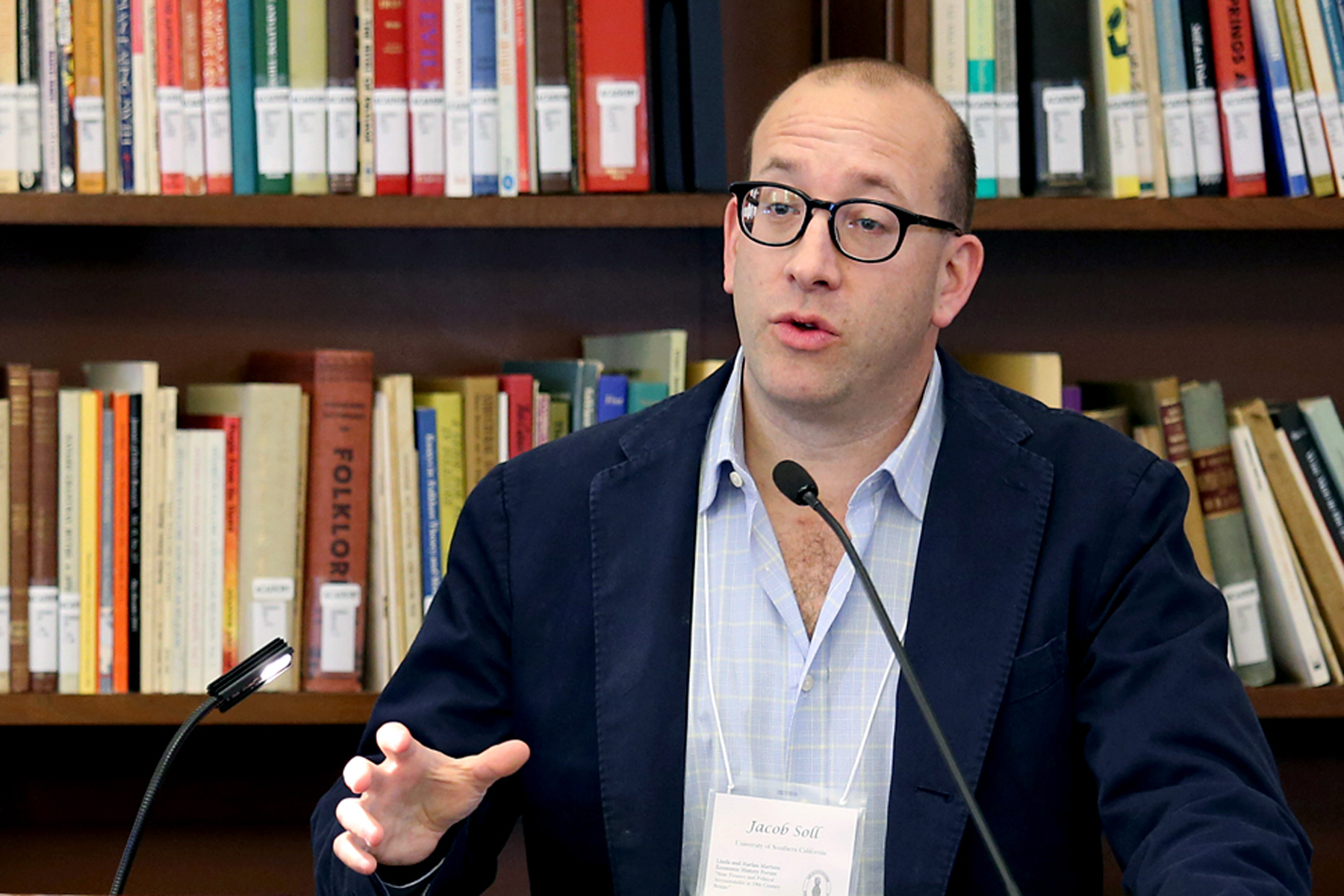 “Economic history has been, and remains, an elemental field that connects the humanities to politics, policy and society,” he said. “What the Martens Economic Forum shows is how USC can lead this vital field, in particular, by employing its unique interdisciplinary approach to producing scholarship with real-world consequences.”

Looking at past economic practices, including accounting, can help us discover what we can learn from the 18th century as we move forward, said Peter Mancall, Andrew W. Mellon Professor of the Humanities and director of EMSI.

“Many modern-day economic problems are actually accounting problems. By having this forum where we bring together experts who can tell us how these circumstances worked out in the past, we hope to have a larger discussion about the modern economy,” added Mancall, professor of history and anthropology and vice dean for the humanities.

An expert on British political history and the author of an innovative work on the history of accountability — a subject that until now has received little scholarly attention — Seaward spoke about building the parliamentary state, government finance and the routine of accountability from 1689 to 1800.

“In every attempt since the 18th century to explain the ascent of Great Britain to unprecedented wealth and global power, Parliament has played a, if not the, central role,” Seaward said. “Parliament in Great Britain has become a paradigm for understanding the mechanisms for building a successful fiscal state.”

However, Seaward questioned the effectiveness of Parliament itself as a vehicle for establishing a credible commitment.

“It’s remarkable, despite an assumption that Parliament is one of the key pillars on which the fiscal state rests, how the whole debate on its development seems largely to ignore the role of Parliament itself,” he said.

The cost of war

As the unprecedented cost of a series of wars, particularly the Seven Years’ War, and the American Revolution helped to crystallize significant internal dissatisfaction with a political system during the 1760s and ’70s, a more challenging system of accountability came to seem critical to ensure rule by consent and financial and international success.

“The difficulty for government was to develop a system that both overcame the dissatisfaction, while avoiding any unnecessary damage to political stability,” Seaward said. “They didn’t immediately succeed.”

Tracing Parliament’s enormous incapacity to ensure the accountability and responsiveness of the executives to the people, Seaward argued that it wasn’t until the 19th century that Prime Minister William Gladstone found a way to combine the authority of Parliament with routine tests of government and the real control of the permanent non-political bureaucracy in the Treasury to create a system of financial accountability that works.

However, Seaward noted, it remains a system whose parliamentary credentials, the capacity for real political intervention and the detail of government finance, are still weak and questionable.

“The equation between the routine process of the fiscal state and the random and unpredictable nature of politics and the parliamentary processes remains still a far from straightforward one,” he concluded.

A roundtable discussion followed, hosted by Soll and Steve Hindle, W.M. Keck Foundation director of research at The Huntington Library.

“What the first Martens Economic History Forum shows is how early modern economic history can help us understand and make sense of the biggest problems facing us today,” Soll said. “We are excited to have the opportunity to continue this work in future forums.”

During the official launch of the Economics Leadership Council at USC Dornsife, organizers announced that within eight months nearly $8 million had been raised.

USC embraces its history with unveiling of Judge Widney statue

Money matters — then and now