The hub of digital media production and education at the USC Annenberg School for Communication and Journalism will be named for Julie Chen ’91, Leslie Moonves and CBS.

The 20,000-square-foot, two-story Media Center at Wallis Annenberg Hall has been formally named the Julie Chen/Leslie Moonves and CBS Media Center, thanks to a joint gift to USC Annenberg.

The center converges audio, video and text production for delivery on all platforms. With a design that transcends many professional newsrooms, it combines USC Annenberg’s student-run digital, television, radio and public relations operations.

“This generous gift from Julie Chen and Les Moonves prepares today’s communication and journalism students for the world of tomorrow by mastering cross-discipline technology in a real-world setting,” said USC President C. L. Max Nikias. “The new Chen/Moonves and CBS Media Center is the centerpiece of innovation in a building, the Wallis Annenberg Hall, that represents innovative thinking.”

Motivated to get involved

“After visiting the campus and seeing the impressive Wallis Annenberg Hall for the first time, I was inspired to support my alma mater and prouder than ever to be a Trojan,” Chen said. “Spending time with the bright, engaged students I’ve met at USC Annenberg — and seeing these cutting-edge studios and workspaces come to life — energized and motivated me to be involved and hopefully make an impact on future generations of journalists and communicators.”

It was USC Annenberg and Wallis Annenberg Hall’s focus on the future that inspired the Chen-Moonves family and CBS to contribute to the project, Moonves said.

This is a best-in-class, next-generation newsroom that our family and CBS are proud to be part of.

“This is a best-in-class, next-generation newsroom that our family and CBS are proud to be part of,” Moonves said. “USC Annenberg has developed a leading-edge, fully converged environment for the creators and journalists of tomorrow, and we’re thrilled to support its future success.”

At the heart of the hall

The center operates at the heart of the technologically transformative Wallis Annenberg Hall, which opened on Oct. 1, 2014. The physical spaces, along with the digital networks of the $59-million building, are designed to offer students and scholars a collaborative environment where they can be nimble and innovative.

“As the digital media revolution pushes ahead, our new building and production laboratories of the Media Center are uniquely prepared to build the next generation of communicators,” said USC Annenberg Dean Ernest J. Wilson III. “The entire USC Annenberg family of students, faculty, alumni and staff extend our great thanks to Julie Chen, Les Moonves and CBS,” he added. “This extraordinary gift is just the latest example of Julie and Les’ longtime and ongoing collaboration with our school.”

Journalism and communication students share material and expertise among platforms, using up-to-the-minute technologies at the center, which is also a base for communication scholars to conduct media research and for PR students to share real-time analysis of social media. 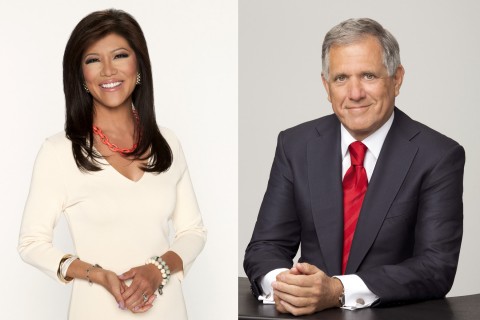 A signature element of the Media Center is perhaps its most visible one: a glassed-in video broadcast studio, visible from Childs Way, that is dubbed the “do-it-yourself” studio because its basic switching technology allows students to direct and produce a Web or TV program while sitting in front of the camera. In the new era of entrepreneurial journalism and communication, the one-man-band studio is an example of technology the new building is using to spark students’ creativity.

From the start, the idea of the Media Center helped spark the vision for the entire building, Wallis Annenberg has said. As president and CEO of the Annenberg Foundation, she directed the gift that initiated planning for Wallis Annenberg Hall.

“It started with the idea that the real future of journalism — the students here — should learn and train and innovate in the kind of 21st-century newsroom, the kind of interactive, multimedia incubator, that should be commonplace in 10 or 15 years,” Annenberg told hundreds of spectators who gathered for the building’s Grand Opening celebration Oct. 1.

Fall 2014 also brought both of USC Annenberg’s schools, the School of Communication and the School of Journalism, two new directors: Sarah Banet-Weiser and Willow Bay, respectively. And two years after launching a $150-million fundraising initiative, USC Annenberg has raised more than $100 million for Wallis Annenberg Hall, scholarships and fellowships, chaired professorships and new student projects. The initiative is part of the broader Campaign for the University of Southern California, a multiyear effort to raise $6 billion for the university’s academic, community and capital priorities. The campaign has raised more than $4 billion since its launch in 2011. 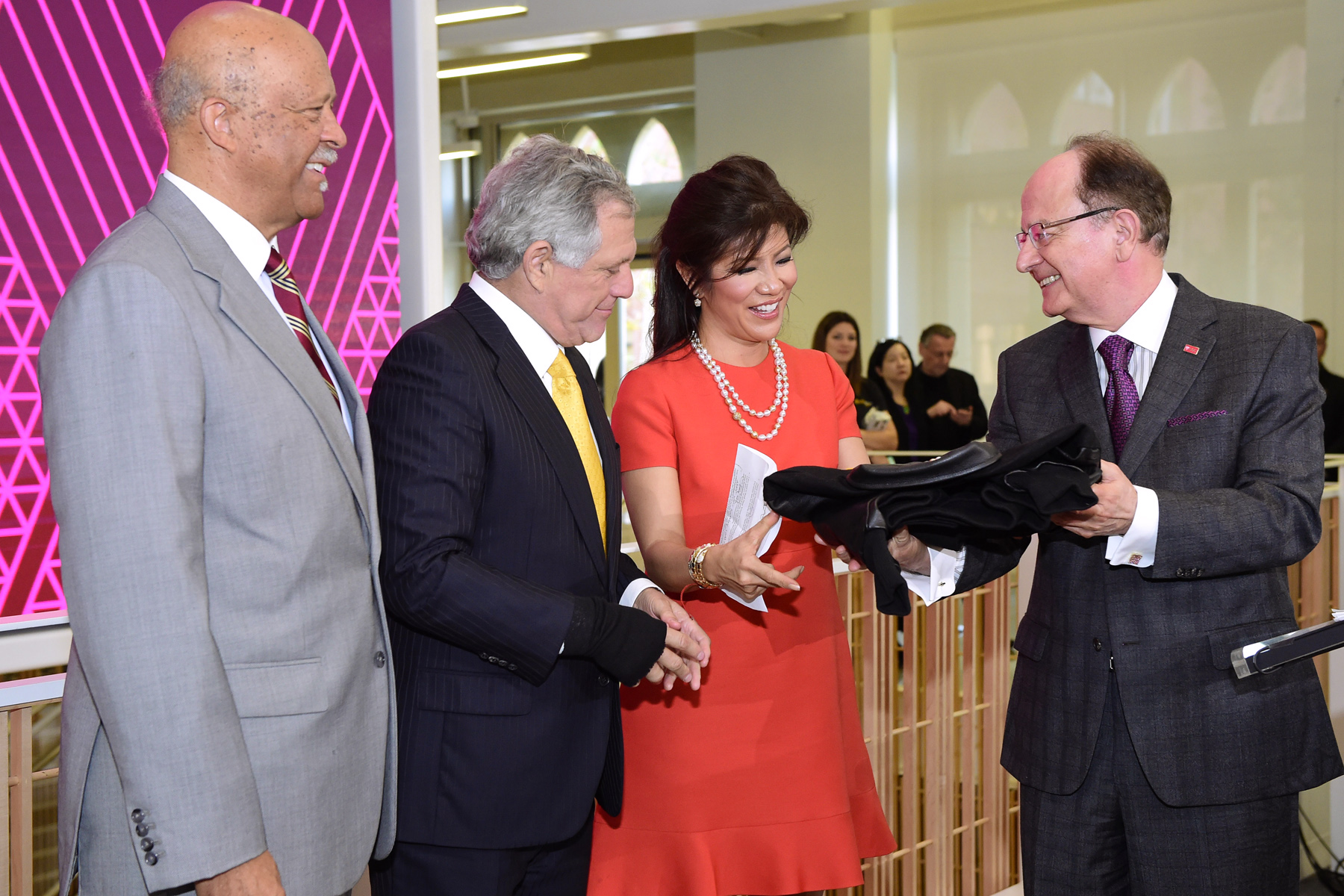 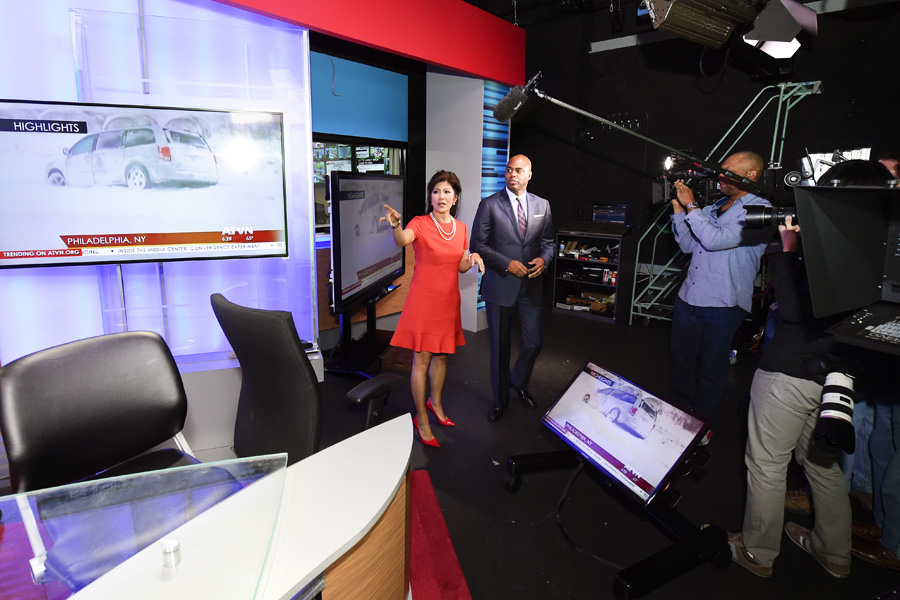 The future of digital communication will come from within these walls.