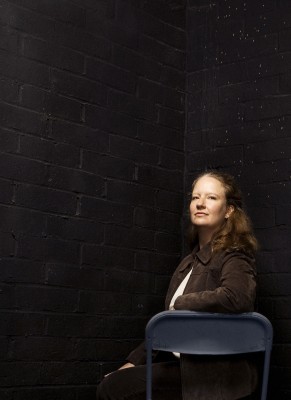 Ellen Lewis had never considered the theater until a seat opened in a playwriting class. (Photo/Tom Sanders Photography via EMLewisPlaywright.com)

Ellen Lewis was several years past graduation from USC’s Master’s of Professional Writing program and working on campus at the Student Information Systems department when she decided to take another class in her old program.

The classes in the genres she usually preferred — fiction, poetry and screenwriting, the field she focused on — were full, but there was a seat available in playwriting, a form she had never studied because, she says, it simply “had not occurred to me.”

“I was lucky because I found the thing I love to do,” she says. “I suddenly understood that this is the way I need to be telling stories. Everything clicked.”

These days she writes as EM Lewis and is a full-time, award-winning playwright whose work has been staged across the country and internationally. Her big break was the 2008 production of her first full-length play Song of Extinction about a high school biology teacher – a survivor of Cambodia’s killing fields – who is the only person who realizes that a musically gifted student in his class is actually struggling.

Produced by Moving Arts Theatre for [Inside] the Ford, a play series at the Hollywood venue, Song of Extinction was named Production of the Year by the LA Weekly Theatre Awards and also won the $25,000 Harold and Mimi Sternberg/ATCA New Play Award by the American Theatre Critics, the largest national award for a new play.

Moving Arts Theatre also tackled another of Lewis’ plays, her one-man autobiographical piece The Gun Show. In it Lewis mines her lifelong relationship with guns, beginning on the Oregon farm where she grew up and a shotgun always leaned against the back door, through her moves to big cities on each coast and a harrowing tragedy with life-altering repercussions.

The play is neither love song nor reprimand. In fact, The Gun Show manages to drive home a poignant message about the ambivalent nature of our debate around guns without coming across as judgmental. The one-man of the show is Lewis herself but she has actually written it to be performed by a man. Actor Chuma Gault, who has the chops to make the unconventional premise seem like an artistic choice rather than a device, played Lewis in the Los Angeles staging.

Lewis spent some time in LA last year in what she describes as a coming home of sorts. Moving Arts was co-founded by Lee Wochner, who taught that first playwriting class at USC, after which he had invited Lewis to join the company.

I learned so much and received so much love and support from being able to do [my first play] at Moving Arts, my little home theatre company.

“I learned so much and received so much love and support from being able to do [my first play] at Moving Arts, my little home theatre company,” says Lewis.

These days Lewis receives love from audiences as far away as South Africa and China. The Gun Show just wrapped up a run at Passage Theatre Company in Trenton, N.J., and Lewis has eight other full-length plays that continue to be performed by theatre companies.

Heads, her play about four western hostages being held captive in Iraq, will be staged this year in New York. Lewis’ second play, Heads won the Primus Prize from the American Theatre Critics Association and has received rave reviews. As with The Gun Show, critics marveled at Lewis’ ability to make the play about more than the salient issue of the day. One critic wrote that Heads “isn’t about Iraq — it’s about a descent into total vulnerability” with another warning that the vulnerable might be Lewis’ audience.

About a year and a half ago Lewis moved back to the farm in Oregon, in part so she could afford to finish writing a play she calls Magellanica: A New and Accurate Map of the World, which she describes as “an epic play, probably of the scale of Angels in America … set in 1985 at a South Pole Research Center about an international group of scientists who are studying a hole in the sky.” Lewis began writing Magellanica during her year as a prestigious Hodder Fellow at Princeton University. The play is ostensibly about the year that the hole in the ozone layer was discovered but, says Lewis, “it’s about a lot of other things as well.”

An epic play about science and a lot of other things seems like a logical next step for Lewis seems to be using her plays to challenge her audiences to find our own voices on the issues of day – just as she took a chance on playwriting, and found hers.

Students double-down on job prospects — and interests — with dual majors

Combining separate tracks gives Trojans an edge, setting them apart from the field in a corporate environment.