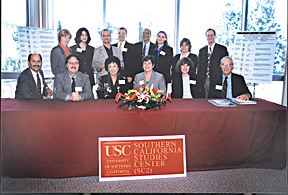 THE SOUTHERN CALIFORNIA health-care system shows symptoms of strain, according to a USC report.

“One of the world’s best health-care systems is increasingly less accessible to many consumers and subject to so many financial and organizational stringencies that even health-care providers are dismayed,” said geographer Michael Dear, lead editor of the Health Atlas of Southern California and director of USC’s Southern California Studies Center (SC2).

“This is a road map for the future of health-care policy in Southern California,” said Stephen J. Ryan, senior vice president for medical care at USC’s Keck School of Medicine.

• The region’s eight counties fared better than the nation as a whole in meeting Healthy People 2000 objectives, the nation’s most comprehensive and commonly used set of indicators to gauge public health.

• Geography matters. While exceeding most federal goals, the quality of public-health indicators varies dramatically from county to county. Uneven distribution of health-care resources leads to unequal access for residents.

• Acquisitions of secular hospitals by religious organizations have proven a mixed blessing, with some underserved populations enjoying improved access, but women who seek certain reproductive care are experiencing a loss in services.

• Violent crime has dropped, but the financial burden of caring for crime victims has markedly risen, straining already overburdened resources.

• Despite recent improvements, the region’s air quality ranks among the nation’s worst, contributing to a dramatic in crease in respiratory ailments among children.

ALONG WITH the Atlas, SC2 issued the “1999 Scorecard of Health and Healthcare in Southern California.” The scorecard assesses 16 facets of public health in the region, determining whether conditions warrant a green light for “favorable,” a yellow light for “neutral” or a red light for “unfavorable.” Each facet received an additional grade of an arrow indicating whether the trend was improving, declining or holding constant.

• The six “red light” issues for 1999 are: increasing health-care costs associated with treating victims of violent crimes; air pollution’s worsening effects on children’s health; limiting of health-care provision due to conflicts in managed care; lack of access to health care for more than a quarter (27 percent) of the region’s residents, mostly the uninsured working poor; a health-care system that is increasingly expensive and less accessible to people in need; and threats to the viability of the region’s safety-net hospitals for the poor and the uninsured.

• The three “green light” issues for 1999: improvements in meeting federal public health goals; a continued decline in Southern California’s suicide rates among most groups; and the emergence of faith-based charitable trusts to fund health care for underserved populations.

The Atlas, the third annual report of SC2’s Metro trends project, reflects the interdisciplinary efforts of 29 researchers from SC2, the USC Keck School of Medicine and its department of preventive medicine, and the department’s Cancer Surveillance Project and Southern California Environmental Health Services Center.

Founded in 1995, SC2 uses Southern California as a laboratory for basic and applied urban studies. USC provided research funding and covered publication costs for the 1999 Atlas.