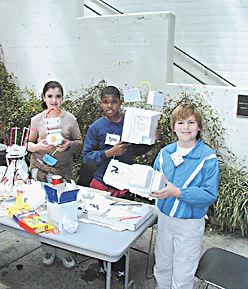 These fifth- and sixth-graders were among 60 elementary school students who descended March 23 on USC’s Verle Annis Gallery and the gallery’s adjoining courtyard to build a mini-city of pipe cleaners, Styrofoam packing materials, cardboard and other recyclables. Pictured (from left) are Maria Furlan, a sixth-grader at Eagle Rock Elementary, with her apartment building made from meat trays and takeout containers; Tyron Strait, a fifth-grader from 93rd Street School, with his bank building of packaging materials; and Sterling Hirsh, an Eagle Rock fifth-grader, with a convenience store also made from takeout containers. Sponsored by the Los Angeles Chapter of the American Institute of Architects, “Boom Town” is a four-hour exercise that strives to teach an awareness of the built environment. The event, which culminated with the arrangement of dozens of such models in a city-like configuration, was hosted by the USC School of Architecture. It assembled 13 volunteer architects, including USC alumni, Leslie Young and Byron Pinckert, and USC associate professor of architecture Douglas Noble.

From Empty Containers to ‘Boom Town’