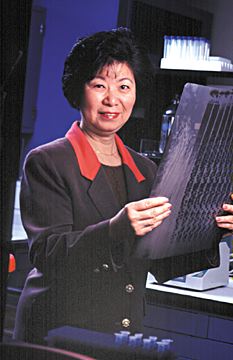 Jean C. Shih is the first woman to receive the Volwiler Award in the 24 years since it was established by the American Association of Colleges of Pharmacy.

Jean C. Shih, the Boyd and Elsie Welin Professor in the department of molecular pharmacology and toxicology at the School of Pharmacy, is being honored by the American Association of Colleges of Pharmacy with its Volwiler Research Achievement Award. She is the first woman to receive the award in the 24 years since it was established.

“We are proud of Jean’s achievements and also share the pride she brings to the school and the university,” said Timothy M. Chan, dean of the USC School of Pharmacy.

The award was conceived to “recognize outstanding research conducted by a pharmaceutical scientist/educator,” according to the AACP. It is sponsored by Abbott Laboratories in memory of its former president and research director, Ernest H. Volwiler. The award – which consists of a $12,000 prize, a gold medal and an inscribed plaque – will be presented to Shih at the AACP’s annual meeting in July, where Shih will also give a presentation.

“I’m really honored because this is a national organization,” said Shih, who is also a professor of cell and neurobiology at the Keck School of Medicine. “I hope this encourages more young people to enter the field of science.”

Shih has been a researcher and educator for nearly 30 years. She joined the USC School of Pharmacy in 1974 as an assistant professor of pharmacy/biochemistry. She is best known for her pioneering studies of a brain enzyme called monoamine oxidase (MAO) and its links to aggressive behavior. Shih tracked down two genes on the X chromosome that control the production of two different forms of MAO. She found that genetically engineered mice that are missing the MAO-A enzyme are more aggressive than those with plenty of the enzyme. And, she notes, if you express enough enzyme in a MAO-A-deficient mouse, the aggressive behavior disappears.

“Dr. Shih, based on an unusual combination of talent, creativity and ambition, has established herself as an internationally highly recognized leader in research on the properties and function of monoamine oxidase,” wrote 1997 Nobel laureate Paul D. Boyer in his letter of recommendation to the award committee. “This key enzyme has a prominent role in the function and pharmacology of the brain.”

In addition to her research contributions, Shih is a respected and prominent educator at USC, noted Ronald T. Borchaldt, a professor of pharmaceutics at the University of Kansas School of Pharmacy and chair of the 1999-2000 Volwiler Award Committee.

She has also been very involved with the AACP, serving on the 1996-97 AACP Research and Graduate Affairs Committee and the 1998-99 Volwiler Research Achievement Award Selection Committee. “Dr. Shih has been active internationally in helping to build relationships between the United States and China, Taiwan, France and South Africa,” Borchaldt said.

Shih said her success could not have been achieved without the support of others. “In particular, I need to recognize Kevin Chen, associate research professor in the School of Pharmacy, who worked with me for 10 years, many of my collaborators and the postdoc graduate students from throughout the years and, especially, my family,” she says. “They’ve made it possible for me to do what I do.”