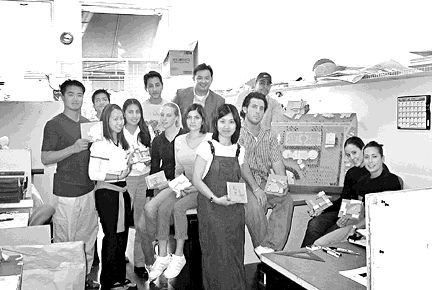 Ken Kurose, back row, with fourth-year architecture students in his Community Design Studio. The students are spending the spring semester trying to maximize an August renovation planned for the California African American Museum.

From the vantage point of the California African American Museum, such recent improvements to Exposition Park as the new Science Center appear distant indeed.

Temperatures in the museum’s atrium-style entrance can top 105 degrees and odors or vermin can invade the room from an adjoining kitchen. The galleries seem dark, and the museum, which was difficult to find to begin with, is attracting less foot traffic than ever. Attendance has dropped by 30 percent since the Aerospace Museum’s IMAX Theater, once located across State Park Drive from CAAM, relocated to the new Science Center in 1997, said Nancy McKinney, CAAM’s deputy director.

“The focus is the center of the park, and [visitors] don’t notice us over here,” she said.

Perhaps most frustratingly, CAAM each February has to turn away droves of school children because the institution can’t accommodate all the requests it fields for Black History Month programming.

But all that will change if the 15 USC undergraduates in Ken Kurose’s Community Design Studio get their way. The fourth-year students are spending the spring semester trying to figure out how to maximize a renovation planned for August at the 16-year-old institution and an expansion slated for 2003.

The museum hopes to add 33,000 square feet to the existing 54,000-square-foot facility. Topping the wish list is an educational facility that would accommodate all the school children who want to visit the museum. The expansion will also include a 499-seat theater, additional storage facilities, a restaurant, a garden and studios for artists in residence. The museum also wants to relocate its kitchen and expand its library, business offices, gift shop and galleries and make the galleries brighter. While the Los Angeles firm of Gruen & Associates has been selected for the renovation, CAAM has yet to issue a request for proposals (RFP) for the expansion.

“This benefits us because we’re getting to express our ideas,” said Kurose, a practicing architect and the studio’s instructor. “The museum benefits because we’re helping the board of directors figure out what it wants to include in its RFP, which will be key for selecting the right firm to carry out the project. I wouldn’t be surprised if some of our ideas end up being incorporated into the final design.”

The student’s final recommendations will be presented May 8 to the museum’s board, but a recent presentation for McKinney and other key officials provided a preview.

Common suggestions from the students included replacing a Science Center theater located on CAAM’s north side with the educational center, which, among other things, would offer Black History Month programming. The architecture students reasoned that location would ease access for pupils of an elementary school emphasizing math, technology and science that is planned for the northeast corner of Exposition Park. One student – Long K. Duong – even suggested housing the proposed artists’ studios within the educational center, possibly separated by a re tract able screen.

“The combination of studios and classrooms allow for interaction between the students and visiting artists,” Duong explained.

To the alarm of an outside architect, two students suggested combating the atrium’s heat problem by removing its roof altogether, essentially doubling the amount of space devoted to an outdoor courtyard.

“The outdoor courtyard isn’t used much as it is,” warned Craig Biggi, an associate with Gruen who attended the preview. “You’d be more or less continuing the existing scheme.”

Enhancing the museum’s visibility from the south, where the park’s master plan calls for the addition of subterranean parking, was another common suggestion. Proposals included adding a four-story tower or perhaps a tall piece of sculpture.

“I’m not proposing the Watts Towers,” said John Torres, the student who made the latter suggestion. “We just need something tall in the courtyard, so people go, ‘Hey, what’s that?’”

Aside from such similarities, the configurations for the renovations differed dramatically. One called for locating the new additions in pie-shaped wedges, transforming the museum’s triangular footprint into a circle. Another suggested arranging the additions in a square. Yet another suggested the construction of an additional bank of galleries opposite the museum’s atrium from its current gallery space.

“There’s such value to this,” McKinney said after the presentation. “I know our needs, but how that can be translated into a facility – that’s where I need input and a lot of it.”