The silence of leading global terror organizations during the recent attacks in Paris raises questions about who was truly behind the events, a noted homeland security expert told a question-and-answer session presented by the USC Price School of Public Policy.

Erroll Southers, the director of transition and research deployment for the USC Center for Risk and Economic Analysis of Terrorism Events, responded to questions from Raphael Bostic, professor and director of the USC Bedrosian Center on Governance, in the Jan. 21 installment of the Price Research Center Collaborative. Attacks two weeks earlier at the Charlie Hebdo magazine and a kosher supermarket killed 12 in the deadliest act of terrorism in France in more than 50 years. 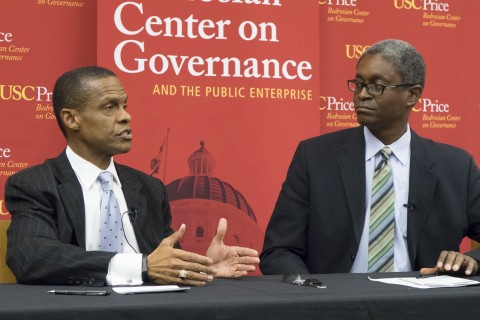 Erroll Southers, left, and Raphael Bostic break down the impact of the terror attacks in Paris.
(Photo/Deirdre Flanagan)

“The massacre in Paris raised many issues about how to govern and maintain security in an increasingly interconnected world where there are many seeking to spread chaos and violence,” Bostic said.

The Paris incident is an example of a new trend in which people born in Western European countries travel to places such as Syria where they can get terrorist training, then return home to operate as so-called freedom fighters.

Southers said the big question is whether this is an organized effort, with terrorist groups such as al-Qaida in the Arabian Peninsula and ISIS having command and control to activate cells. One attacker in Paris claimed to be directed by al-Qaida in the Arabian Peninsula, but that group waited until the attackers were killed to claim responsibility.

ISIS in particular is developing as a threat because it is acquiring territory, controls resources and has a complex media arm. By swearing allegiance to the organization, opportunists interested in becoming freedom fighters can get the training, logistics and communications to enhance their operation in ways few were able to get from Osama bin Laden.

“It’s a war against a terrorist army as opposed to a terrorist organization,” Southers said. “They are very organized, very sophisticated, and they are built for sustainability. We’ve already found out that if you take out a leader in a drone strike this afternoon, tomorrow he’ll already be replaced and not missed.”

Southers is working with a national initiative from the Obama administration and the Department of Homeland Security called Countering Violent Extremism as its theme leader at the Center for Risk and Economic Analysis of Terrorism Events. He says it is known people have left the United States to fight in Syria, and it would be naïve to think that they haven’t returned. But, the homegrown threat is as troubling as returning foreign fighters.

If they want to hit a target in LA, they want an Angeleno. They want someone who has probably grown up here.

“These organizations are not importing their operators anymore,” Southers said. “If they want to hit a target in LA, they want an Angeleno. They want someone who has probably grown up here.”

Southers emphasized the importance of improving relationships in immigrant communities, which can be vital to helping identify people who have grown up locally and been an average kid until they start to radicalize. He noted that Tamerlan Tsarnaev, the deceased Boston bombing suspect, was ejected from his mosque when he challenged the imam’s decision to celebrate Martin Luther King Jr. Day.

“If we marginalize and alienate the people in the mosque and these kinds of things happen, then we won’t know about it until after they’ve done something significantly worse,” Southers said. “When an imam could have said, ‘We have a problem here; we just ejected this guy from the mosque and maybe he’s somebody you can take a look at.’ We can’t marginalize the community that we need to work with.”

About 50 students, faculty and community members attended the event.

“It’s interesting that homegrown terrorism is becoming more of an issue, and I think Dr. Southers raised a lot of good points about what we need to focus on, such as working with the community, to find solutions,” said Justine Dodgen, a first-year master of public administration student at USC Price.

A new major in international relations and the global economy prepares students for such careers.

Co-sponsored by USC Shoah Foundation, the event in Poland is part of a week commemorating the liberation of the death camp.

When disaster strikes, he’s there to help

Battered but not broken in the Philippines

Using the latest in disaster recovery research, a USC team trains educators to support students in the aftermath of a recent typhoon.