It took months of preparation. But there is little one can do to prepare for a visit to Auschwitz.

On Tuesday, staff members of USC Shoah Foundation — The Institute for Visual History and Education joined world dignitaries and more than 300 survivors of the Nazi concentration and extermination camp to commemorate the 70th anniversary of its liberation by Soviet troops on Jan. 27, 1945.

Sitting in a tent erected at the infamous red-bricked Death Gate, attendees heard survivors beg the world to never let others suffer the way they did. Now in their 80s, they were mere children when they were wrenched from their families, tattooed and locked inside the largest death machine ever built.

“We do not want our past to be our children’s future,” said Roman Kent, whose story is among the nearly 53,000 testimonies housed in USC Shoah Foundation’s Visual History Archive.

His remarks were met with applause from the audience, but he stopped them while being overcome with anguish and sorrow.

“I really wanted to repeat myself, but you stopped,” he said, his voice cracking. “But I will still repeat myself because that’s the key to my existence. We survivors do not want our past to become our children’s future.” 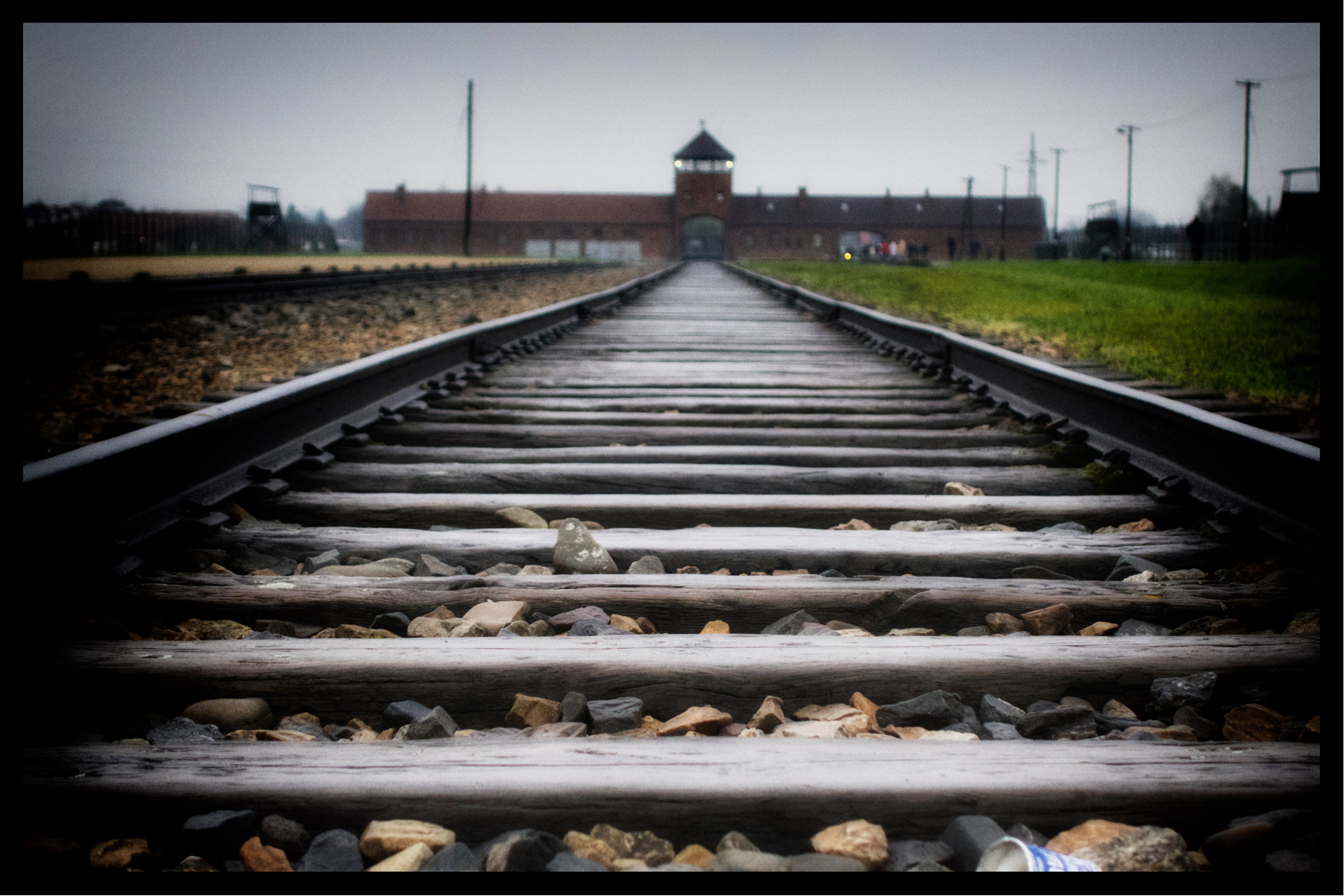 The Auschwitz camp is seen at the end of the tracks. (Photo/Steve Purcell)

His sentiment echoed the theme embraced by USC Shoah Foundation and other groups that joined together to create Auschwitz: The Past is Present, a global communications and education to support of the official anniversary commemoration of the camp’s liberation.

In addition to the speakers, a new film was introduced that will be shown to visitors of the sprawling facility — now the Auschwitz-Birkenau State Museum — where 1.1 million people, mostly Jews, were slaughtered as part of the Nazis’ “final solution.”

Titled simply Auschwitz, the documentary is a production of USC Shoah, produced by Steven Spielberg, directed by James Moll and narrated by Meryl Streep.

Heard on the soundtrack was a cello performance by Anita Lasker-Wallfisch, who played in the camp’s orchestra, and the singing of Darrio Gabai, likely the last remaining Sonderkommando, young Jewish men who forced to remove the bodies of those murdered in the gas chambers.

“Ten percent went to work and the balance went right away to the crematorium,” said the 93-year-old Gabbai. “Nobody knew. They took my brother to work, but seeing my mother and father go to the bus, he ran to them. Nobody knew they went to the crematorium.

“An hour later, when I came back, they were already ashes. That is what I know.” 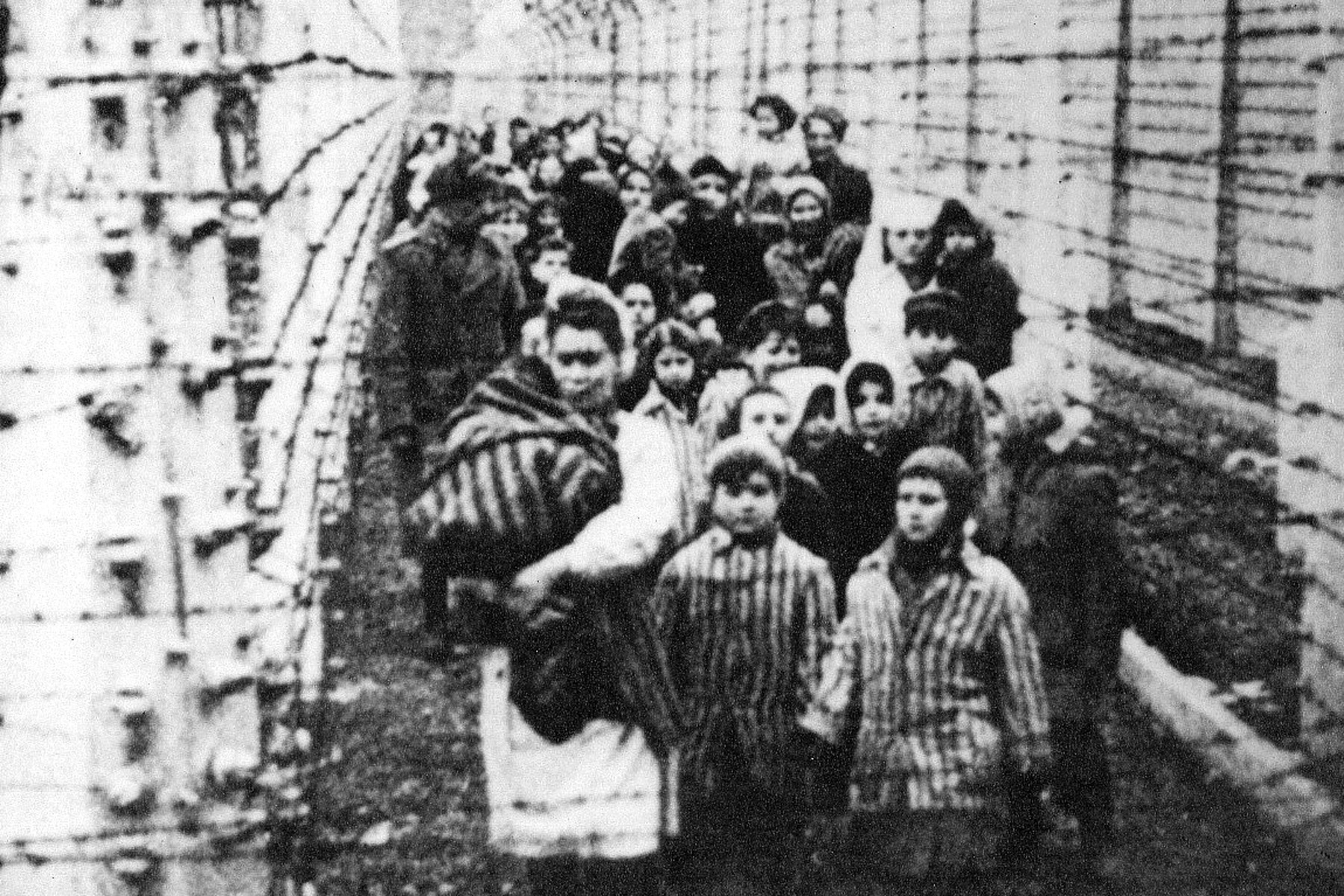 Eva Kor and her sister, Miriam, hold hands at the front of the line during the liberation of Auschwitz in 1945. (Photo/courtesy of USC Shoah Foundation)

Smith said the commemoration did more than honor survivors.

“It was quite an amazing experience being surrounded by 300 survivors who were there to bear witness,” he said. “What we accomplished was taking the message of Auschwitz way beyond the commemoration itself to ensure that people all over the globe are reached with a very profound and important message for our times.”

Also on hand were a group of students and 25 teachers from 11 countries, who came for several days of professional development and educational opportunities.

For 14-year-old Lucia Wiedeman from El Segundo High School, attending the commemoration was an honor she planned on sharing with others.

The survivors said things I would never think of when I started the program last summer.

“I learned a lot more than I thought I would have,” she said. “The survivors said things I would never think of when I started the program last summer. I wrote down a lot of quotes from what I heard. Students will be able to relate to this.”

Teacher Liz Bommarito has taught about the Holocaust for years at Midwood High School in Brooklyn, N.Y. But she was taken with how being at Auschwitz added to her understanding.

“I guess I never really understood the depth of what happened here — the enormity of it — until I walked into some of the rooms. I went into the room with the shoes and couldn’t walk around the whole thing to see it, yet as an educator, I had to see some of it so I could report it back to my students,” she said, struggling to find the right words. “The thing that triggered — the room with the hair — I can’t explain the emotions. It was the thing that made it so real.”

With snow blowing outside the warm tent, and the train tracks that carried so many on their final journey bathed in light under panes of protective glass, the ceremony had an otherworldly feel to it. After the ceremony, many guests walked across the frozen landscape to leave candles at a memorial site deeper in the camp complex. As they trekked through the snow, their dark silhouettes were shown on monitors to those still sitting inside.

When the ceremony was over, it was the words of Kent that seemed to resonate the strongest. During his speech, many people held their heads and others wept openly as he called for tolerance for all people, demanded that leaders from around the world in attendance to work ever harder to make that happen, and called for teaching children about respect for others as a moral imperative. He said that if he could, he would add a commandment to the biblical 10 to ensure that everyone knew it was their duty to act against evil.

“You should never be a bystander,” he said.

The USC Gould alum’s visit includes an exploration of some of the institute’s 55,000 video testimonies of genocides around the world.

Technology, nuclear power are driving issues in the Russia-Ukraine war

USC experts discuss how tech-driven globalization and energy are front and center in Russia’s war on Ukraine.