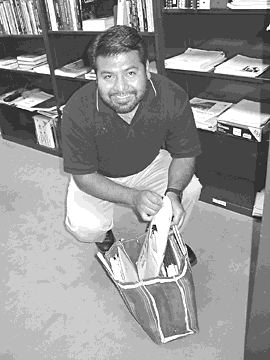 Gaspar Rivera-Salgado, an assistant professor of sociology, displays the paperwork he has accumulated as founder of his hometown’s association. Rivera-Salgado’s town is Santa Cruz Rancho Viejo in the Oaxaca region of Mexico .

Until two years ago, only 30 of the 52 homes in Gaspar Rivera-Salgado’s tiny Mexican hometown of Santa Cruz Rancho Viejo had electricity.

Then, under the guidance of Rivera-Salgado, a group of some 85 former residents now living in California dug deep into their own pockets and sent home $8,000 to connect 15 additional homes to the grid.

“Everyone was ecstatic,” said Rivera-Salgado, who this fall joined USC as an assistant professor with a joint appointment in sociology and American studies and ethnicity.

Such is the power of so-called “hometown associations” or grass-roots groups of U.S. immigrants who band together to send funds to their homelands for community improvements.

These groups are also assisting schools and religious institutions, establishing sports facilities and improving sanitation, roadways and water supplies. They’re also active on this side of the border raising scholarships for children reared in the United States, establishing cultural exchange programs and providing translation services and health education.

“They’re tremendously important to these economies, but individual researchers have just worked with single hometown associations,” Rivera-Salgado said. “Nobody has ever tried to bring together all these people to provide a larger look at what’s happening.”

To address this gap, Rivera-Salgado is planning a meeting on campus that will assemble 25 to 30 leaders of such organizations. The April 29 event, which has received support from the Southern California Studies Center, Joint Educational Project, Center for Religion and Civic Culture, and SC/W (Southern California in the World), is believed to be the first of its kind. Organized with help from Nora Hamilton, an associate professor of political science, and Zenia Ruiz, a junior majoring in sociology and Spanish, the meeting will run from 9 a.m. to 2 p.m. in the Center for Religion and Civic Culture.

“We’ve got a good number of people and they seem very interested,” said Ruiz, whose Zacatecas-born parents are active in hometown federations in Chicago. “They want to share their experiences and successes and what they’ve learned.”

Rivera-Salgado and Hamilton hope to lay the foundation for a database of such associations that could be used by a range of USC researchers who look at immigrant communities. Eventual outcomes could include a directory that would enable hometown associations to contact each other to establish political coalitions or write joint applications for grants to supplement their fund-raising efforts, for instance. By establishing relationships with these groups, organizers also hope to open the door to a myriad of volunteering and research opportunities for undergraduates.

“Eventually, I want to recruit students to write the respective histories of these groups,” Rivera-Salgado said.

The researchers also hope to get a handle on the magnitude of the financial contributions made by these groups. According to a recent study by Mexico’s National Council of Population, funds sent home by Mexican emigrants represent the country’s third-largest source of foreign exchange, accounting for an estimated $8 billion. More than 1 million of Mexico’s households, or 1 in 10 families, survive off these remittances.

“These figures include remittances sent to individual families as well as entire communities,” Rivera-Salgado said. “No records have ever been established to isolate the portion of these remittances that go to community causes.”

And the figures only reflect remittances made by Mexican immigrants. El Salvador and Guatemala have also spawned hometown associations, and members of at least half of the participating associations will hail from these countries.

Hometown associations aren’t unique to Latin America, Rivera-Salgado said. “In turn of the century New York, immigrants from Eastern Europe and Italy organized around hometown associations, so this is … part of the larger American history.”

Mexican immigrants have been forming organizations for at least 70 years in this country, said Rivera-Salgado, a native of Mexico’s Oaxaca region and the founder of his hometown’s group. “Mutalistas” or mutal-aid societies among Mexican immigrants sprang up in the United States during the Depression.

Today’s associations tend to evolve from soccer clubs and other informal networks, said Rivera-Salgado, who did his doctoral thesis on such groups from Oaxaca. The oldest Mexican hometown association in operation today – from the Zacatecas region – dates back to 1965, when a wave of Mexican immigrants set down permanent roots in the United States at the end of the bracero program. But the tradition really took off in the 1980s when the Mexican economic crisis sent more immigrants than ever across the U.S. border.

While courted by Mexican presidents and governors be cause of their importance to that country’s economy, the hometown associations have been largely overlooked by American political forces.

“You never hear second- or third-generation Latino leaders addressing this group,” he said. “They’re viewed as too passive or involved in their community of origin. But they’re very well organized, and they’re doing a lot to better their lives in America. As they gain more experience, I see them having a huge political influence.”

Alum breaks down barriers for Latinos interested in law

As executive board president of the Mexican American Bar Foundation, employment attorney Nina Huerta has taken on the charge to help diversify the law profession.

Experimental album explores how the U.S.-Mexico border will sound in 200 years

Created by USC Dornsife fellow Jonathan Leal and producer Charlie Vela, the album celebrates the musical traditions of the Texas borderlands — and warns of the potential impact of climate change.

Mexican Immigrants in U.S. Keep Close Ties With Their Hometowns