After graduating in just three years from the USC Dornsife College of Letters, Arts and Science with a bachelor’s degree in biological sciences, Margarian had applied to medical school and was on track to achieving his longtime dream of becoming a pediatric cardiothoracic surgeon.

“I did research in gene therapy and rotations with the surgery residents at Children’s Hospital Los Angeles while I was an undergrad at USC,” he said. “I also had my research results published in the Journal of Molecular Therapy, and I was the top student in the biology department for two consecutive years.”

Margarian had already applied to medical schools when he decided to use his fourth-year scholarship funds to take an extension class in business law.

“The instructor was an attorney, we got talking and it sparked a little interest in law and law school,” he said. A few weeks later, Margarian’s future took a 180-degree turn.

A friend, also premed, dared me — in fact, bet me — that I could take the LSAT without studying. I said, ‘OK, I’ll take the bet for fun, even if I score low.’

“A friend, also premed, dared me — in fact, bet me — that I could take the LSAT without studying. I said, ‘OK, I’ll take the bet for fun, even if I score low.’ So I took the LSAT and got a score of 164 out of 180, which is good enough to be accepted to a Tier One law school,” Margarian said. “I think I scored so high because I wasn’t stressed about the exam.”

Margarian’s friends were so impressed, they introduced him to attorneys who were USC alumni. The realization that it would take only three years to finish law school and become an attorney, compared to 14 years to become a surgeon, was the clincher for Margarian.

“I realized I loved the medical profession, but not the lifestyle that came with it,” he said. “I decided to go to law school so I could start supporting my parents sooner. Within two months, I changed everything I had been planning on for the previous 10 years of my life.”

He believes in USC

The former premed student said he applied to three law schools and turned down an offer of full tuition at another school to attend USC.

“I believe in USC because of what it had done for me during my undergraduate studies,” he said. “I knew coming out of law school, I would be a better contender in the legal profession if I had a double degree from USC.”

While attending the USC Gould School of Law, Margarian and his brother, Armen, then a student at the USC Marshall School of Business, started and managed an online automobile brokering business. After earning their degrees, the brothers teamed up once again to start the Law Offices of Hovanes Margarian.

Margarian managed the legal aspects of the practice while his brother managed the business logistics.

Since then, the law office has evolved into a full service midsize law firm with several associate attorneys. Margarian takes pride in defending the interests of the ordinary man against powerful corporate giants.

My clients are mostly financially challenged immigrants with poor English skills, who get taken for a ride by unscrupulous dealerships.

“I handle many civil litigation matters and the automobile fraud cases that are close to my heart because that is where I started my legal career,” he said. “My clients are mostly financially challenged immigrants with poor English skills, who get taken for a ride by unscrupulous dealerships. These clients save up a couple of thousand dollars to buy a car so they can go to work and take their kids to school. A couple of months later, their car breaks down and the dealership tells them it’s not their problem anymore.”

Margarian’s research often shows the car sold had been in a crash and was not safe due to major safety and mechanical problems.

“The cars are often purchased at auctions for a fraction of their selling price. Being financially challenged, these clients can barely make the payments,” he said. “Then the car breaks down and the clients have no recourse. It’s very gratifying when we can litigate these cases and get these people’s money back to them.

“Often you are literally putting their lives back together by handling their case because if they can’t drive their car, they can’t go to work and take their kids to school. So a family’s life is on hold because an unscrupulous dealership decides to make a $10,000 profit by selling a bad car.”

Margarian also helped to bring a successful class action case against the Los Angeles Department of Water and Power for waste collection overcharges in which residents had been overcharged by about $6 million over several years, according to the Los Angeles Daily News.

‘The best thing that happened to me’

Armenian-born Margarian thanks USC Dornsife for much of this success. He came to the United States with his family when he was 13. 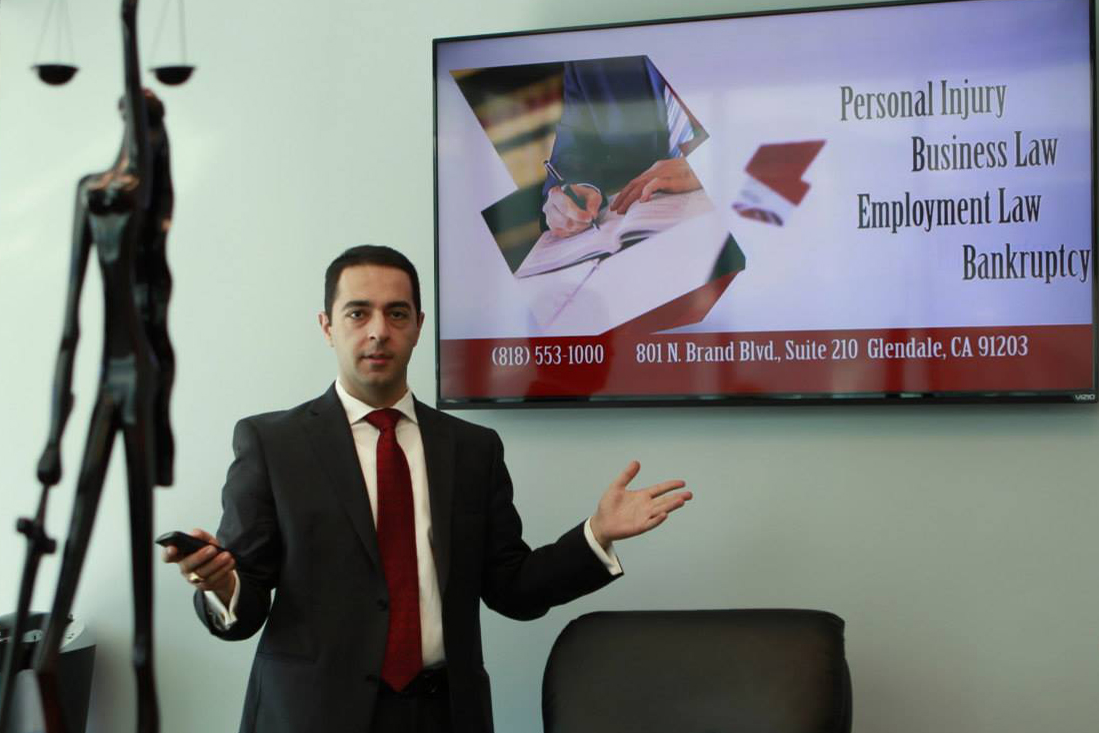 “Going to USC was the best thing that happened to me after I arrived in the States,” Margarian said. “As a teenager I didn’t feel I fitted in anywhere. USC was the first place I felt I belonged. Whatever was necessary for my evolution as a student was there. USC has top-notch professors, all the equipment and the funding one could need — basically there are no limits to your capacity to learn at USC. Plus, USC gave me the confidence to open my own business and start my own practice straight after law school.

“In retrospect, I think I’m very lucky that I made that bet with my friend because this career is a perfect fit for my personality,” Margarian said. “I love to engage in a good fight but to do so rationally and for the right reasons. Litigating cases on behalf of consumers gives me that opportunity and privilege.”

The law practice Margarian opened with his brother eight years ago has gone from strength to strength. The brothers now handle 11 areas of law and recently relocated their office to Glendale, holding a grand opening in July 2014 with a reception for 200 guests, including the mayor of Glendale.

“My objective is to grow the practice into a full-service firm with 20 to 30 attorneys,” Margarian said.

The former elected president of the Downtown Alumni Club of USC, Margarian also co-founded the USC Armenian Alumni Association with his brother. On March 25, the association will honor Steve Sarkisian, the first Armenian coach of USC football.

Margarian, whose office sports a large photo of Tommy Trojan, admits that his enthusiasm for all things Trojan means no one has any doubt which university he attended.

“If we had gone to a different school,” he said, “and had not seen the power and value of using the Trojan Family network to help the causes we believe in, we would not have the lifestyle or business success we do now.”

The Judge Hollinger Alternative Dispute Resolution Program will prepare students for the field of arbitration and mediation.

Andrew T. Guzman, an expert in global economics and interdisciplinary research, will assume his new post in July.

Special deliveries of health and hope go to Armenia

A hub of Armenian history makes its mark

Celebrating its 10th anniversary, the Institute of Armenian Studies raises awareness of culture and contemporary issues on campus and beyond.

The little wager that led to a big law career