An international, collaborative study of the brain, led by researchers from the Keck School of Medicine of USC, has found eight common genetic mutations that seem to age the brain an average of three years – and result in smaller brains.

“Any change in those genes appears to alter your mental bank account or brain reserve by 2 or 3 percent,” said Paul Thompson, Keck School of Medicine of USC professor and principal investigator of the Enhancing Neuro Imaging Genetics Through Meta Analysis network, or ENIGMA.

The team of some 300 scientists at 190 global institutions pooled brain scans and genetic data from people in 33 countries.

“This crowdsourcing and sheer wealth of data gives us the power to crack the brain’s genetic code,” Thompson said. The work could lead to targeted therapies and interventions for Alzheimer’s disease, autism and other neurological conditions.

The research – the first high-profile study since the National Institutes of Health launched its Big Data to Knowledge Centers of Excellence last year – was published Jan. 21 in the peer-reviewed Nature.

Most likely to benefit

Using MRIs of more than 30,000 people, the researchers looked for genetic differences affecting the size of key parts of the brain that coordinate movement, learning, memory and motivation. 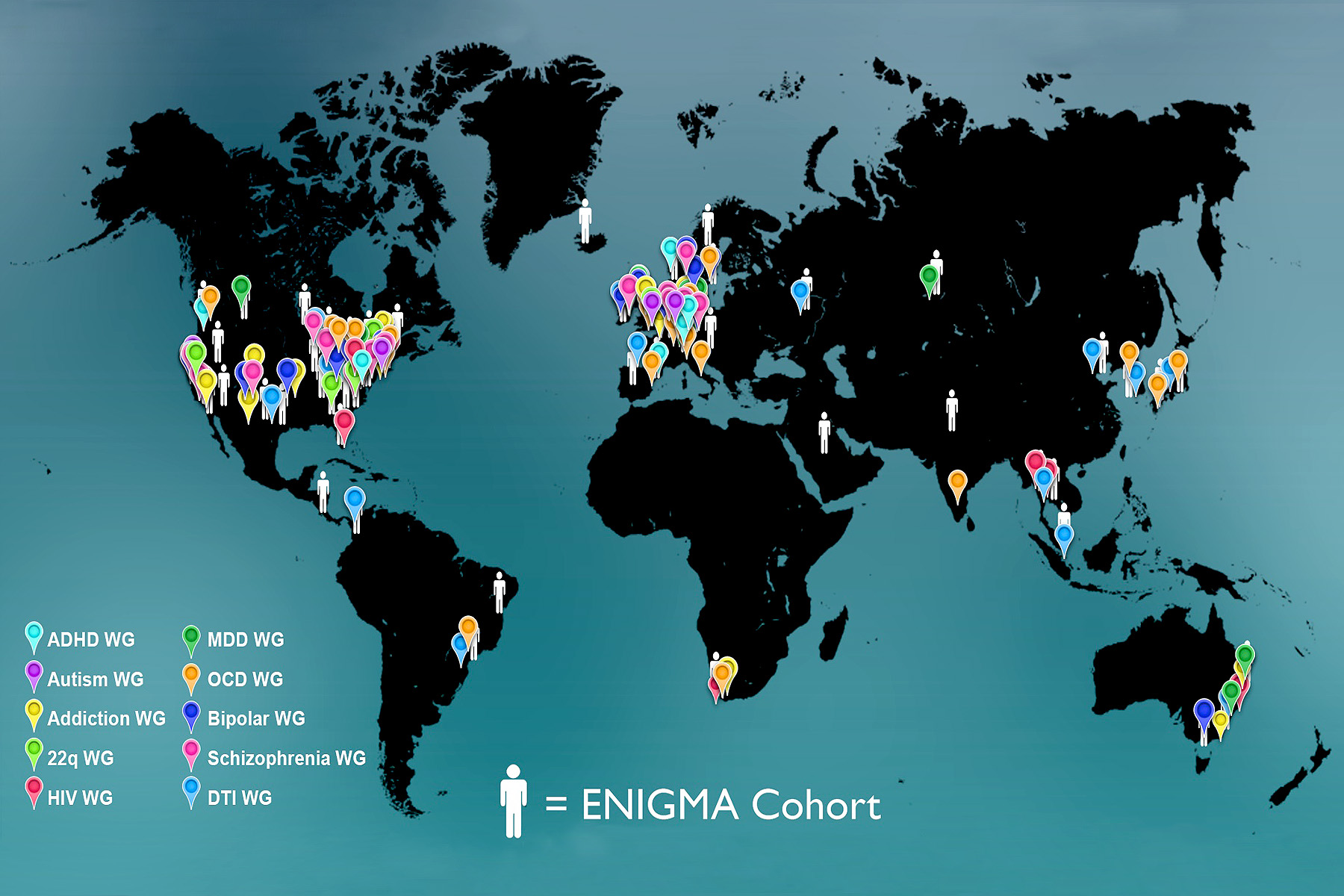 A map charts contributors to the ENIGMA study. (Image/ENIGMA)

The group found eight genetic variants associated with reduced brain size, several in over one-fifth of the world’s population. Some of the genes are implicated in cancer and mental illness.

The next step is to investigate whether the genes, besides influencing brain size, also cause disease or reduced mental function.

In October, the NIH invested nearly $32 million in its Big Data initiative, creating 12 research hubs across the United States to improve the utility of biomedical data. USC’s two Big Data to Knowledge Centers of Excellence, including ENIGMA, were awarded a total of $23 million over four years.

USC co-authors included Derrek Hibar, Neda Jahanshad and Arthur Toga. ENIGMA was supported in part by a consortium grant from the NIH Big Data to Knowledge Initiative, supported by a cross-NIH partnership, and by public and private agencies worldwide.

USC has 11 of the world’s most influential scientists

Articles published rank among the top 1 percent most cited for significance in their respective fields.