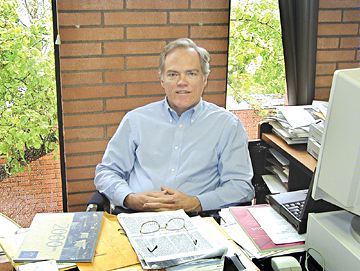 Richard Wightman Fox, a professor of history, said he was drawn by USC’s location in Los Angeles and the direction of its history and American studies departments. “USC is committed to expanding the history department and the American studies program, and it’s doing so in keeping with the best developments in American studies.”

Leading cultural historian Richard Wightman Fox is a firm believer in the Constitution’s separation of church and state – except when it comes to his own profession.

The outlook has guided Fox, who comes to USC after 10 years as a history professor at Boston University, through an award-winning cultural history, a critically acclaimed biography and several collections of essays, one of which changed his field. The extent to which the secular and religious elements of American culture co-mingle also will figure prominently in Fox’s next project: a history of perceptions of Jesus in American culture.

“Richard often takes a religious subject and turns it into a window into American culture,” said Steven Ross, a colleague in the history department. “There are very few people who do this with as much grace and insight as Richard. He’s one of the leading intellectual historians in the country.”

The brother of Harriet Beecher Stowe and a prominent abolitionist in his own right, Beecher was the most renowned preacher of his day. In court proceedings as closely watched by late-19th century America as the O.J. Simpson trial was by late-20th century America, Theodore Tilton, a close friend and editor at a New York newspaper where Beecher once worked, accused the Brooklyn preacher of having an affair with Tilton’s wife, Elizabeth.

Contemporary historians, based on their interpretation of such seemingly straightforward testimony as Beecher’s admission of “a spiritual affinity” with Elizabeth Tilton, have tended to conclude that the affair actually occurred. But by investigating the historic meanings of this and other phrases, Fox concludes, “There was no way to know if they were guilty or innocent.” For him, the scandal is interesting precisely because the truth was elusive enough to prompt a drawn-out civil trial that ended in a hung jury.

“Major trials are cultural events that allow a whole era to look at its self and … the basic issues that confront that era,” Fox said in a Hartford, Conn., book reading covered earlier this year by C-SPAN’s “BookTV.” “We learn a great deal about 19th century when we look at what Beecher, the Tiltons and their friends and enemies were saying.”

The Association of American Publishers apparently agreed. They gave the book a history award for 1999.

Fox is also well known for a 1986 biography of Rein hold Niebuhr, who was described at the time of his 1971 death as the most influential theologian of his day. He was also a major political force, who helped bring the Protestant church to support the labor movement and sounded some of the earliest alarms about Jewish persecution under the Third Reich. The first full biography of the activist-theologian who advised a long list of statesmen, “Reinhold Niebuhr: A Biography” (Pantheon Books) was hailed by the New York Times as “a finely balanced biography” that assessed “the phases of Niebuhr’s thought dispassionately and acutely.” To this day, book reviewers tend to measure new research on Niebuhr against Fox’s work.

“His is considered the classic book on Niebuhr,” Ross said.

In addition, Fox has co-edited two essay collections that are staples in undergraduate history courses: “A Companion to America Thought” (Basil Blackwell, 1995), and “The Culture of Consumption: Critical Essays in American History” (Pantheon Books, 1983), which is considered a signal book in American cultural history.

Part of USC’s appeal for Fox was its location: “Los Angeles itself is interesting to anybody who studies American culture. All over the world, L.A. is regarded as a critical point of innovation for the whole country – as America with a vengeance.”

Fox, who has also taught at Yale University and Reed College and who served as director for seven years of BU’s American studies program, has more than an academic interest in the stated goals of these programs. While he has attracted the most attention for concentrating on white, Protestant figures from America’s Northeast, Fox foresees his own research putting increasing emphasis on multiculturalism and the American West.

“‘Jesus in America,’” he said, referring to his current project, “can only be done in a multicultural way since there are so many ways of experiencing him. You can’t really tell the story without systematic attention to perceptions in African-American, Latino and Asian-American communities.”

Although Fox was raised in Los Angeles and did his graduate and undergraduate work at Stanford, his only published work set in California is a 1979 history of the state’s mental institutions, a project that grew out of his Ph.D. dissertation. But the son of the television writer and producer Ben Fox, whose television show “Waterfront” enjoyed a brief run in the 1950s, hopes to change that.

“In the long run,” Fox said, “I do see myself working on a project about the Hollywood cohort that includes my father and their dream of making it in the early days of TV. They were typical of many people in Hollywood who had a rough ride from the 1950s to 1970s.”