Grissel Granados MSW ’10 is still here. At 28 years old, this may not seem like much of a statement, but to Granados, it’s a reality that many in her situation do not share.

Born in Mexico, she contracted the HIV virus from her mother. Her mother, unaware that she had been infected through a blood transfusion, unwittingly transmitted it to her husband as well as their infant daughter. Five years later when Granados’ sister was born, the family finally learned of their status.

“My dad was the one getting sick,” she recalled. “At that time, in 1991, they didn’t really test people like him — a young, married, heterosexual male. By the time doctors diagnosed him, there wasn’t much else they could do for him. It was too late.”

Two months later, her dad died and the family, including her younger sister who tested negative for the virus, immigrated to the United States. 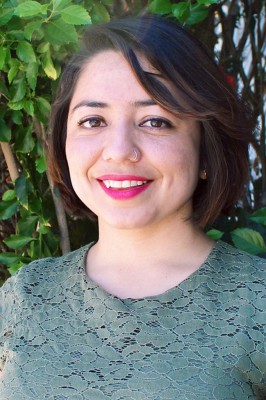 One of the lucky people

Granados knows she’s one of the luckier ones. Growing up in Los Angeles where she had good access to medical care and a network of supportive family and friends, she has been able to live a relatively normal life.

While Granados was pursuing her master’s at the USC School of Social Work, she began to wonder what happened to other perinatally infected children. That’s when the idea for We’re Still Here was born.

The documentary, directed by Granados and John Thompson MSW ’13, and slated for release this year, shares the stories of the first generation of children who were born with HIV in the 1980s and ’90s. Granados hopes the film becomes a mouthpiece for a group that she believes has largely been forgotten in the history of HIV/AIDS.

“Because the population is such a dwindling group, in comparison to the larger population infected with HIV, it’s not something people focus on at all,” she said. “We talk about gay men, transgenders, people who are behaviorally at risk or vulnerable to being at high risk for HIV. Even when we talk about long-term survivors of HIV, we talk about white gay men who were leading the movement in the ’80s or ’90s.

We’ve faced stigma and rejection from the moment we were born. We have a narrative that needs to be told.

“But our experiences are unique. We’ve faced stigma and rejection from the moment we were born,” she continued. “We have a narrative that needs to be told.”

A champion for HIV advocates

The film is just one way Granados has become a champion for HIV advocacy. Her day job is in the Division of Adolescent and Young Adult Medicine at Children’s Hospital Los Angeles. As project coordinator for the Los Angeles Integrated Center for Care and Supportive Services, she works with youth who are affected by HIV — primarily gay and bisexual men and transgender people of color.

Staying true to her Community Organization, Planning and Administration roots, Granados has also been involved in local community planning as a member of the Los Angeles County Commission on HIV. As co-chair of the Standards and Best Practices committee, she advises and educates communities and institutions on issues related to youth and the HIV response locally and internationally.

On a national level, Granados is also beginning to make her mark. Since September, Granados has been serving as a member of the Presidential Advisory Council on HIV/AIDS. PACHA provides information and recommendations to the White House on how to effectively implement the national HIV/AIDS strategy, as well as monitor its progress.

“It’s quite an honor,” Granados said. “It surprises me because I’m doing the work that I’m doing, trying to do the little bit that I can, and I sometimes forget what kind of an impact that I’m having because there’s always more work to be done.”

The work never seems to stop for Granados, who readily takes on new endeavors and challenges with ease. This year, she’s added yet another personal goal to the mix: She plans to run her first marathon.

And make no mistake: Granados will be there.

A series of papers in Health Affairs examines how the Affordable Care Act could affect two sectors of the nation’s most vulnerable people.

For the first time, scientists and engineers have identified a critical cancer-causing component in the virus that causes Kaposi’s sarcoma.

New grant will allow USC researchers to examine how a move to permanent housing changes social networks among the homeless in Los Angeles.

Alumna with HIV helps others born with the virus