In his youth, Chuck Spielman would listen to his father’s friends swap World War II stories, enthralled by the men’s tales of everything from European travels to life on the frontlines.

“I was fascinated by the age of 5,” he said. “The stories of men and women who would leave civilian life willingly and fight for their countries fascinated me.”

This turned out to be a lifelong interest through high school — where his World War II colonel-turned-social studies teacher passed around rocks from the beaches of Normandy — and college.

As a result, Spielman has amassed a collection of World War II military artifacts now on display in Hall of Heroes, a private San Diego museum. 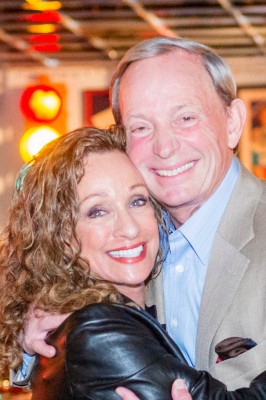 Amy and Chuck Spielman support the USC Center for Innovation and Research on Veterans & Military Families. (Photo/courtesy of the Spielmans)

A veteran who served in the Vietnam War, the next logical step for Spielman has been to support the efforts of organizations such as the USC Center for Innovation and Research on Veterans & Military Families (CIR) at the USC School of Social Work.

Through the Spielman Family Foundation, Spielman and his wife, Amy, have donated $20,000 each year for the past three years to CIR, bolstering its work in the transition of veterans and their families into communities through research, education and training, and global partnerships.

“Being a veteran, I don’t think anybody could even attempt to understand what veterans go through unless they themselves are a veteran,” Spielman said. “CIR is an organization made up of veterans with Master of Social Work degrees who are educationally equipped to deal with the problems our veterans face. I don’t think there is a better combination.”

Spielman is particularly impressed with CIR’s recent report, “The State of the American Veteran: Los Angeles County Veterans Study,” which found that many service members leaving the military and returning to Los Angeles County are not prepared for the transition home and have a range of needs — including employment, housing, and health and mental health services — that cannot be easily provided by a single organization.

The Spielmans hope that some of the proposals from the study, including a community public awareness campaign that would include family and friends of returning service members, would be implemented to help those most in need.

The spending of the Spielmans’ gifts, which have been left to the discretion of the research center, have helped fund the aforementioned study, among others.

Without the support of friends and donors such as Amy and Chuck Spielman, we would not be able to do what we do.

“Without the support of friends and donors such as Amy and Chuck Spielman, we would not be able to do what we do, which is to make the lives of veterans better,” said Anthony Hassan, director of CIR. “I’m especially gratified when veterans find the work we do so compelling and important that they’re willing to help fund our mission of directly and quickly translating research into practice that can be used to help veterans and their families lead healthier, happier lives.”

Spielman said knowing that CIR is carefully and consistently producing research and educational tools to help veterans, as well as those social workers and clinicians who help veterans, convinces him to keep giving.

“We know the people involved, and we know they’re 100 percent dedicated to the goal,” he said. “They keep us informed and make us feel part of the family. When you’re a believer and a part of the family, it makes you want to keep supporting.”

For Spielman, giving consistently to organizations that support causes he firmly believes in not only ensures continued assistance for those who need it most, such as military veterans, but it has set a good example for his children, who have grown up to engage in philanthropy as well. He hopes his children will also give to veterans causes such as CIR when he no longer can.

“I have a link to USC through my own personal passion. That’s a strong catalyst,” Spielman said. “When we write a check, we speak from our hearts.”

A soldier who left boot camp for Iraq found a path to USC, which gave him the chance to work with peers.

The social work program allows her to get specialized education working with military populations.