Bacteria has become a big part of a USC scientist’s life.

Naomi Levine studies the impact of microbial communities on global climate change and the function of marine ecosystems.

“The primary focus of my lab is to understand climate-ocean ecosystem interactions and the sensitivity of marine ecosystems to changes in climate,” said Levine, Gabilan Assistant Professor of Biological Sciences and Earth Sciences at the USC Dornsife College of Letters, Arts and Sciences. “Currently my lab is focusing on ‘the bottom of the food chain’ — the phytoplankton and the bacteria.”

Levine joined USC Dornsife a year ago after completing several years of postdoctoral work at Harvard University, part of which was supported by a Climate and Global Change Postdoctoral Fellowship from the National Oceanic and Atmospheric Administration. 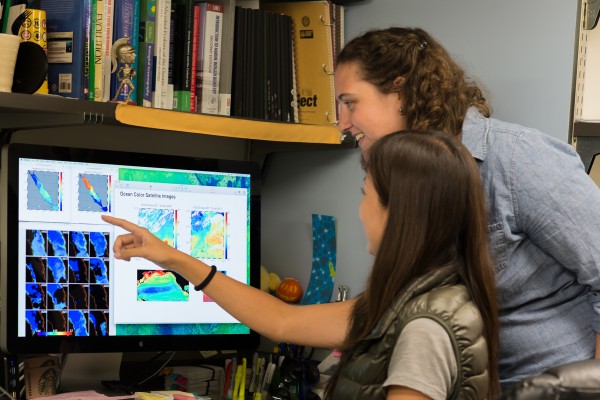 During her first year at USC, Levine has developed a research program based in the Allan Hancock Foundation Building with the help of three USC Dornsife graduate students — Xiao Liu, Erin McParland and Elizabeth Teel — and she hopes to expand her lab with postdoctoral positions in the near future. Her position is supported in part by USC Women in Science and Engineering through the Gabilan Assistant Professorship.

An overarching theme of Levine’s research is the impact of “fine-scale processes” on large-scale dynamics.

The fine-scale processes include the life and death of marine phytoplankton and bacteria; large-scale dynamics include the movement of carbon dioxide — a greenhouse gas — out of the atmosphere and into the ocean surface, where it’s converted into organic matter by microscopic photosynthetic organisms.

We want to know more about the composition of the bacterial community.

“We want to know more about the composition of the bacterial community — essentially, who is there and what role the composition of the community plays in large-scale ecosystem dynamics and carbon cycles,” Levine said. “Ultimately, we want to develop a computer model that’s simple enough to run at the global scale and still capture the role that these bacteria are playing.”

Levine stresses the importance of the structure of bacterial communities — what types of bacteria are present, how fast they are growing, and if and how they’re competing with each other.

“Bacterial community composition is not in the models,” she said, “and yet it can impact the amount of carbon that’s taken up from the atmosphere through photosynthesis, and it also can impact the type of organisms that are doing the photosynthesizing.”

Levine said the composition of these microbial communities is subject itself to the variable nature of the marine environment, including vast eddies that spin off of currents such as the Gulf Stream, and tear through their microscopic worlds with the impact of a hurricane.

“You can think about this as ‘weather in the ocean’ and the impact it has on daily life,” she said. “For comparison, if you lived in Miami, where the weather is sunny much of the time but you have periodic torrential downpours, your daily routine would be much different than someone who lives in Seattle, where you have extended periods of constant drizzle all day.

“In the marine environment, we believe we need to understand and model this kind of variability to see how it affects the way marine organisms grow and compete and to accurately predict what will happen to ocean ecosystems in a warmer world.”

Levine is conducting her research on carbon cycling in the open ocean with support from the National Science Foundation. The project will include collaboration with the USC Neighborhood Academic Initiative to develop an ocean sciences module for neighborhood high schools, including a field trip to the Wrigley Marine Science Center and hands-on boat experience collecting oceanographic data, possibly aboard USC’s vessel Miss Christi.

Can plants adapt to a changing environment?