As a child, Michael Bonaguidi dreamed of shaping cities as an architect or engineer. Now he dreams of shaping brains as the newest principal investigator to join USC’s Department of Stem Cell Biology and Regenerative Medicine.

“Growing up on Legos and Lincoln Logs, I was very fascinated with building things,” he said. “As I took more biology courses and was exposed to other facets of science — from chemistry to physics — I became more interested not in the outside but within. And that’s what got me into bioengineering versus structural engineering.”

When it comes to brains, Bonaguidi already has his building blocks. His team studies individual neural stem cells within the adult brain. These stem cells have the potential to spawn more stem cells or to form new neurons and their critical supporting cells, called astroglia.

“We’ve essentially been exploring what neural stem cells can do, both under normal conditions and after injury,” he said.

Bonaguidi found these neural stem cells in an important part of the brain known as the hippocampus, which is involved in learning, memory and emotions. These stem cells offer intriguing possibilities for treating a variety of symptoms associated with Alzheimer’s disease and mood disorders.

He’s also on the quest to discover whether cells in other parts of the brain can acquire regenerative capabilities following head trauma, stroke or various types of brain damage.

“My approach is actually to learn what the brain can do and what it cannot do in terms of repair and regeneration,” he said, “and to learn the lessons of what it can do, identify what it can’t do and overcome those limits.” 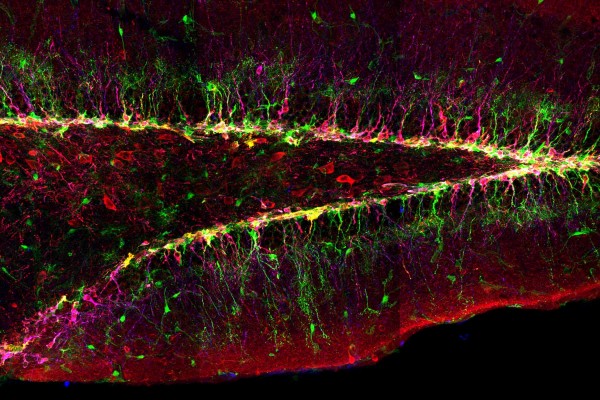 One way to push these limits could be by finding potential drugs and chemicals that encourage neural stem cells to either last longer or make particular types of cells. This could usher in new treatments for physically and mentally debilitating conditions.

Bonaguidi has the ideal training to tackle these tough problems. A native of Chicago, he completed his undergraduate studies in bioengineering at Marquette University in Milwaukee. He then returned to Chicago to pursue a Ph.D. in neuroscience from Northwestern University and headed to Baltimore to complete his postdoctoral training in stem cells at Johns Hopkins University.

“Michael brings an engineer’s view of systems and a biologist’s view of function to the rare stem cell populations that continue to make new nerve cells throughout our lives,” said Andrew McMahon, director of the Eli and Edythe Broad Center for Regenerative Medicine and Stem Cell Research at USC. “His research will enhance the existing strength in regenerative neuroscience in our center and synergize with the strong USC neuroscience community.”

Bonaguidi is eager to continue his research as a new principal investigator at USC’s stem cell research center. He’s excited to be part of USC Stem Cell, the university-wide initiative bringing together more than 100 faculty members from all disciplines.

For me, I think the sky is the limit at USC.

“For me, I think the sky is the limit at USC,” he said. “It’s in a tremendous growing phase right now and that’s made very obvious by the substantial investment in stem cell research, neuroscience and imaging.”

As a half-marathon runner, hiker and cyclist, he’s also looking forward to Southern California’s spectacular mountains and year-round sunshine. He plans to take his wife and young son on frequent trips to nearby state and national parks to explore the trails.

For him, this is the best way to recharge and “regenerate” his own brain, so he can better work toward regenerating the brains of the patients that will eventually benefit from his research.

“Running is very liberating, especially when so much time is spent in a lab,” he said. “You can block out everything and be more in touch with yourself or you can sort through scientific problems and go to the place where you want to go in your mind.”

Over the last decade, the California Institute for Regenerative Medicine has brought many potential medical treatments into clinical trials.