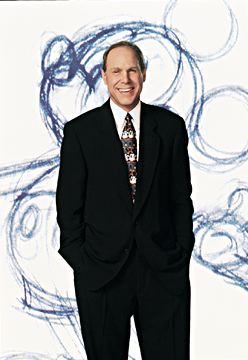 If Michael D. Eisner’s life were depicted on screen, his character, he says, would have what screenwriters call a nice “arc.”

“In 1964, I received my first collegiate degree from Denison University, a rural school in the rolling hills of America’s heartland. Thirty-six years later, I am receiving a degree from USC, one of the most urban of schools in the heart of America’s second- largest city. I could not have scripted it better,” said Eisner, chairman and CEO of the Walt Disney Co., who will receive an honorary doctorate of humane letters, honoris causa, and deliver an address at USC’s 117th annual commencement.

Eisner, a 30-year entertainment industry veteran, is widely credited with revitalizing the once-ailing “mouse factory.” After the New York native joined the firm as chairman and CEO in 1984, he restored profitability to Disney theme parks, resurrected the feature-length animated film and increased the value of the company’s stock.

Under Eisner, Disney has produced a string of hit films, including the 1992 hit “Beauty and the Beast,” which was the first animated film to be nominated for an Academy Award for best picture. Disney has expanded its theme parks, launched a cruise line, created a strong Internet presence, acquired sports franchises – which include the Mighty Ducks and the Anaheim Angels – and acquired Capital Cities/ABC. ABC owns 10 television stations, including KABC in Los Angeles, a television network and 26 radio stations, and cable properties such as ESPN. Disney’s annual sales have grown to $23 billion, and its share price has increased nearly 30-fold.

With Eisner as steward, Disney’s films and animated features have included “Down and Out in Beverly Hills,” “Who Framed Roger Rabbit,” “Aladdin,” “The Little Mermaid,” “Toy Story” and “Tarzan.” ®

Eisner began his career as a clerk with NBC in 1964, soon moving to CBS, where he worked in programming. He joined ABC – then a young network – in 1966, and rose through the corporate ranks, becoming senior vice president of prime-time production and development.

In 1976 he became president and chief operating officer of Paramount Pictures, which soon moved from last to first place among the major film studios with a string of films that included “Saturday Night Fever,” “Raiders of the Lost Ark” and “Beverly Hills Cop.”

Carrying on a long-standing family tradition of philanthropy, Eisner and his wife, Jane, created the Eisner Foundation Inc. in 1996. Established with an $89 million gift from the Eisners, the foundation funds children’s organizations and public school, medical and dental care programs, with special emphasis on Southern California.

Eisner serves on the boards of directors of numerous organizations. He is a trustee of the California Institute of the Arts, the American Film Institute and Denison University, a small liberal arts college in Granville, Ohio.

His success in the entertainment industry has been recognized with several awards and honors, including the Inter national Radio and Television Society Gold Medal Award (1992) and his induction into the Academy of Achievement’s Hall of Business (1994).

“This life journey, if you will, from Denison to USC embodies the depth and breadth of the American educational experience,” said Eisner. “As different as these two schools may be physically, they both open up young minds to the world of ideas. I am honored beyond words to have been deemed worthy of this recognition.”