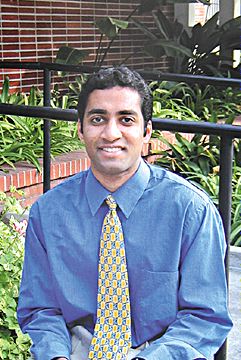 This month, valedictorian Jacob Chacko had to prepare for final exams, write a valedictory, get ready for two years of study in Oxford, England, and decide whether to attend medical school at USC, UCLA or UC San Francisco when he returns.

Jacob Chacko swears he’s surprised by every academic honor he receives – most of them, lately, with a hefty stipend attached.

His latest honor carries no financial reward, but it does oblige him to speak for several minutes in front of 25,000 people at USC’s annual commencement on May 12. Chacko – Marshall Scholar, Trustee Scholar, member of USA Today’s All-USA Academic Team – is the valedictorian for USC’s Class of 2000.

“When I got the letter from the provost, I opened it, read it once and just stopped walking. I read it two or three more times. This was not on my radar screen at all,” Chacko said.

Chacko, who was profiled by USC Chronicle in January when he won a coveted Marshall Scholarship for graduate study in England, is graduating with a double major in biology and gerontology and a minor in health policy and management. This fall he will begin a two-year program in politics, philosophy and economics at Oxford University.

When he returns to the United States, Chacko will enter medical school. As if studying for finals, preparing a valedictory for May 12 commencement exercises and getting ready for England weren’t enough, he must decide by May 15 whether to attend medical school at USC (full scholarship), UCLA (Regents Scholarship) or UC San Francisco.

“My first love is medicine. I want to become a physician and practice in a clinical setting – but eventually I want to get into policy-making,” he said.

All three medical schools have already accepted him and agreed to defer his admission for two years. In addition, he recently learned that he won a $7,000 Phi Kappa Phi national fellowship award for medical school.

Since the Marshall Award, he has been selected as one of 20 U.S. college undergraduates on the USA Today All-USA Academic Team; was presented with the University Trustees Award and Phi Beta Kappa Undergraduate Award; and won an inaugural USC Renaissance Scholars award (worth $10,000) for students whose broad interests help them excel academically.

“With his combination of scholarly achievements, leadership and extracurricular activities, Jacob has personified dedication to his own development, the university and the surrounding community,” wrote Michael L. Jackson, vice president for student affairs, in a letter nominating Chacko for the Marshall award.

In his USC career, Chacko has been an avid volunteer in public schools near the USC campus. He tutored elementary school students and high school students enrolled in USC’s Neighborhood Academic Initiative, helped organize a leadership academy for Foshay Learning Center students, and is planning a free, weekend soccer camp for local elementary students.

Chacko was also a starting forward and midfielder on the USC men’s soccer team until he was injured last year, and hopes to play varsity soccer at Oxford. A resident adviser in his dorm since his sophomore year, he was selected last fall as one of 11 campus-wide senior RAs.

Chacko entered USC as a Trustee Scholar, an award that is the highest academic honor given to entering freshmen and that pays all tuition costs for four years. He was also selected for USC’s baccalaureate/M.D. program, which guarantees en trance to the Keck School of Medicine of USC after graduation.

Under the guidance of USC biological sciences professor Albert Herrera, Chacko conducted research on the remodeling of neuromuscular synapses in frogs. The project won a 1999 Dean of Research Award for Excellence in Undergraduate Research.

As a youngster, Chacko had solid role models for hard work and achievement. His parents, who were born in the Indian state of Kerala, emigrated to this country in the early ‘70s. His mother, Leela, is an emergency room physician; his father, K.M., is a mechanical engineer and CEO of T&K Mechanical of Torrance. They live in Rancho Palos Verdes.

And soon, USC will have another Chacko to shower accolades on: Jacob’s younger brother, David.

David, who Jacob says shows more academic promise than he did, is graduating from high school next month and has been accepted at Northwestern, Harvard and USC.

“He’s leaning toward USC, and I’m trying to get him here,” Chacko said in late April.

And the elder Chacko must have been persuasive: On May 1, David Chacko – who will be valedictorian for Palos Verdes Peninsula High School – decided to follow his older brother to USC, where he’ll enroll as a Trustee Scholar in USC’s baccalaureate/M.D. program.

Valedictorian Jacob Chacko Is No Stranger to Awards