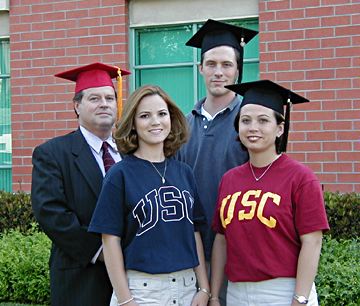 Edwin Forrest Boyd III won’t be in the audience when his two older children walk in Friday’s commencement ceremonies, but they haven’t spent a second fretting about it.

Indeed, “Skip” Boyd will be collecting his Ed.D. on the same day “Tad” Boyd and Elizabeth “Lisa” Boyd pick up their bachelor of arts degrees.

USC’s database for degree records isn’t organized to allow checking the number of parent-child graduates over the years. But the odds are against such a triple-header, according to registration officials.

“I don’t recall ever hearing of something like this before,” said Ken Servis, USC registrar and dean of academic records. “This is very rare, if not unique.”

For the Boyd family of La Cañada, who joke of “genetic” links to USC, the feat doesn’t seem out of step. Great Uncle Marvin Ostrander attended USC in 1913 or 1914, depending on which family member you ask. Skip already has three other degrees from USC: a B.S., MBA and a specialized MBA in marketing. His two siblings also graduated from USC: Brother John Ross received a B.A. in 1970, and sister Frances Amy followed suit in 1971.

Their father, Edwin Forrest Boyd Jr., now retired, taught obstetrics and gynecology for three decades at the Keck School of Medicine of USC. The patriarch even served as camp doctor for a couple of years at Troy Camp, a getaway for USC alumni. Skip jokes that his mother is “up to her eyebrows” in Town and Gown, a philanthropic organization concerned mostly with raising funds for USC scholarships. Indeed, Francis Boyd has been an active member for 25 years.

“We give a nice literal twist to the idea of the Trojan Family,” Tad said.

Still, Lisa didn’t expect to start a family footrace in August of 1996 when she entered USC as a freshman on a Presidential Scholarship. Her father signed up for the USC Rossier School of Education’s Human Performance Technology Degree, an accelerated Ed.D. program, in January of 1998. That was the same month Lisa began her education major. Also that semester, Tad, an anthropology major, transferred to USC as a junior from Pasadena City College. The final Boyd child – Mary Kathleen “Katie” Boyd – joined the pack last spring as a freshman majoring in theater. Katie and Lisa belong to the same sorority – Alpha Chi Omega – but Lisa lives in the sorority house while Katie lives in an apartment.

“I used to say we were getting a group discount,” Lisa said.

(They aren’t, insisted Skip, who considers the “financial hit and the stress level” the only drawback to the Boyd degree tag-team.)

The kids might not have been so good-natured about going to the same college as their father if they also shared a campus.

“I was in an off-campus program in Orange County, so they were independent, doing their own thing,” said Skip, a management consultant who also teaches marketing and computer science at the University of Laverne and the University of Phoenix.

The two generations, nonetheless, had enough contact to reap some rewards. Skip, who will look for a full-time professor position after graduation, said he found two capable editors in his older children. Tad, who plans to take a year off before heading to law school or graduate school, excels in the finer points of argumentation, Skip said. Lisa, who plans to become a special education teacher, is a whiz at the lingua franca of educational scholarship – the American Psychological Association’s style guide.

Besides, the closeness can’t be beat, Tad said. “When you feel down, you run into someone who has to love you – your family.”

For the Boyds of La Ca�ada, Commencement Is a Family Affair