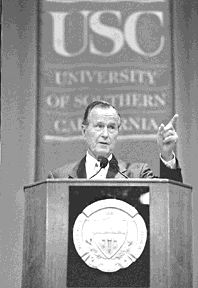 Bovard Auditorium was filled to capacity March 30 for the first USC President’s Distinguished Lecture of the new millennium.

The sold-out spring event featured former U.S. President George Herbert Walker Bush, who met with President Steven B. Sample in Sample’s office before strolling across USC’s campus for a pre-lecture gathering at the Hoose Library.

Sample reminded the crowd that President Bush was no stranger to the campus. “We honored him in 1995 with a Julius Award from the USC School of Policy, Planning, and Development for his exceptional heroism during World War II and his extraordinary service to the people of the United States,” he said. Sample went on to describe the qualities that enabled the 41st president to provide leadership through the end of the Cold War and into what Bush termed a “New World Order.” “For him, politics was not just the airy abstraction of ideology,” Sample said. “He knew that ideology could only take us so far. For President Bush, intangibles made the difference – experience, pragmatism and consensus building.”

Later, in Bovard Auditorium, Bush spoke about contemporary politics. But he also tailored his remarks to the university audience, saluting USC’s volunteer work in the community and the importance of the Pacific Rim – a focus of USC’s strategic plan. He spoke – often humorously, to the audience’s delight – for nearly 45 minutes and then took questions.

The series was inaugurated by Sample in 1996 to bring distinguished contemporary leaders of international stature to the USC campus to speak in an open forum. Other notables who have taken part in the lecture series include biographer Doris Kearns Goodwin, U.S. Sen. George J. Mitchell, Brian Mulroney, Margaret Thatcher, Ed Bradley, Henry Kissinger, Gen. Colin Powell, Shimon Peres and Gen. H. Norman Schwarzkopf, who was the inaugural speaker.