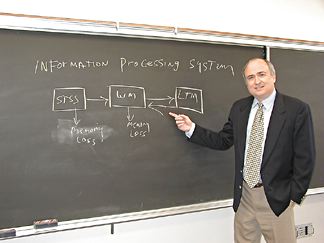 In his EPT 110 class, professor Myron Dembo shows students how to find their own academic weaknesses and correct them.

As a high school student in San Marino, Eileen Pinkerton was diagnosed with a learning disability involving “processing information.”

So imagine her surprise this spring when a standardized test administered in one of her USC courses identified another problem altogether.

“I’ve learned that I have an anxiety problem – I’d freeze up whenever I had a lot of work and feel completely overwhelmed,” Pinkerton said.

Thanks to Myron H. Dembo’s Educational Psychology and Technology course at the USC Rossier School of Education, the freshman has learned how to better manage her stress and organize her time, so she feels less stress to begin with.

Such revelations are routine in the semester course that turns undergraduates into mini-social scientists in search of their own academic weaknesses. Through self-administered tests, trial and error and much introspection, students take a magnifying glass to anemic motivation, persistent procrastination, rampant disorganization and other stumbling blocks to a successful college career. They then research and evaluate the effectiveness strategies for taming these demons.

“My goal is to give students the tools to function more efficiently,” said Dembo, holder of the Stephen Crocker Professorship in Education. “I want to empower them.”

Created in 1994 as a part of the safety net extended to the academically weakest 5 percent of USC’s incoming freshman class, the course may be unique in the college prep landscape.

“Study skills courses abound, particularly at the community college level, but they consist mostly of tips and hints,” Dembo said. “Nobody else is focusing on the mechanics of cognition.”

With Dembo’s insights now available for the first time in a self-help book, he hopes his approach to turning students into “self-regulated learners” will find a wider audience, particularly in state college systems where as many as 50 percent of incoming students require remedial instruction.

“The problem with typical remedial courses is they just focus on content,” said Dembo, the author of “Motivation and Learning Strategies for College Success: a Self-Management Approach” (Lawrence Erlbaum Associates, 2000). “When students fall behind in the future, they don’t have the skills to catch up.”

He also believes his system for enhancing a student’s sense of self-efficacy has a role to play in school reform.

“The emphasis up to this point in reform has been on trying to do more for students – to get them better teachers, better curricula, schools with better governance and so forth,” Dembo said. “There’s been insufficient attention to the people who are most responsible for their success: students themselves. I want to help them take control of their learning so they can better function in all kinds of environments, even in schools that are less than optimal. “

In the current issue of the Elementary School Journal, Dembo recommends that educators employ his approach as early as middle school. But Dembo, a popular lecturer on the educational circuit, maintains elements could be introduced as soon as children begin attending school.

At least at the college level, the evidence of the approach’s effectiveness is compelling. At last year’s meeting of the American Educational Research Association, Dembo reported on the progress of the course’s first two classes as they moved through five semesters at USC. When compared with a control group of USC freshmen with the same SATs but higher incoming GPAs, the freshmen who took EPT 110 were earning slightly higher grades by their fourth and fifth semesters. Their retention rate, meanwhile, was comparable to the students with the higher incoming GPAs.

Most students see improvements in eight of 10 categories measured by the Learning and Study Skills Inventory, a standardized test that compares a student’s study habits with those of other college students across the nation.

“The strongest and most consistent improvements tend to be in time management and reduction in test anxiety,” Dembo said. A University of Texas at Austin study has shown that time management is a better predictor of college success than SAT scores.

Armed with their LASSI results, Dembo’s students pick another USC course to serve as a “laboratory” for the learning and motivational strategies that they will evaluate. For the rest of the semester, they keep a journal tracking how well those strategies serve them. These reflections later figure into the course’s final project: “a self-management study,” recapping everything a student has learned about his or her study habits.

“If I say, ‘I want you to do something differently,’ it doesn’t mean the student will change,” Dembo said. “But If I can get them to observe their behavior, they’re more likely to say, ‘You know what – I’m not doing so well.’”

One key to Dembo’s approach is getting students to examine what they really want out of life and to establish specific goals in that direction.

“Research has shown that the more specific and proximal a goal, the more motivated and persistent a person will become in achieving those goals,” he said. “Goals tell you where you’re headed, how far you’ve gone, what you’ve got to do to adjust your behavior to get to the goal.”

From there, getting a student in shape involves developing time management skills, he believes. To convince his students, Dembo asks them to spend a week charting how they spend every hour of every day.

“Many will say, ‘Gee, I didn’t realize I was spending four hours a day watching TV or two hours a day talking with friends,’” Dembo said.

Borrowing a page from executive development courses, Dembo illustrates ways to prioritize the many competing demands on a student’s time.

In the quest to become better test takers, Dembo’s students dip into the latest research on memory and learning. For help in more sophisticated forms of intellectual processing, he teaches them how to assemble material into maps, charts, tables and matrixes. Dembo also teaches them a form of note taking where they generate potential test questions from their notes.

Amy Strook, who took the course in 1995, is working on her master’s degree at USC while teaching school in Redondo Beach. To this day, when Strook reviews class notes, she jots down questions suggested by the notes in the left-hand margin. To review for tests, Strook merely practices answering those questions.

“It’s still one of the most inspiring classes I’ve had in college,” Strook said of EPT 110. “It gave me a great base.”