Faded murals line the walls of the Palace of the Jaguars in Teotihuacan in the Valley of Mexico. But centuries ago, the jaguars glistened — illuminated only by natural sunlight — steeped in vibrant reds, blues, greens and oranges. At twilight on the summer solstice, shadows crept up the paintings, warping viewers’ perceptions of the colors.

And each year, on that summer night, it appeared as if the jaguars were leaping out of the surface of the wall.

Art historian Justin Underhill, USC Mellon Postdoctoral Fellow in Digital Humanities at the USC Dornsife College of Letters, Arts and Sciences, recently published his paper “The Phenomenology of Sunset at the Palace of the Jaguars, Teotihuacan” in World Art. His research describes the Purkinje effect, or the idea that — with decreased light — our eyes remain sensitive to greens and blues, while red hues become less visible, creating the effect of the jaguars’ momentary flight.

There are whole cities in the ancient world that are aligned to illuminate artwork at certain times of day.

“Our society is unique in that we have essentially conquered the night,” Underhill said. “People 300 years ago were much more sensitive to fluctuations in daylight, and there are whole cities in the ancient world that are aligned to illuminate artwork at certain times of day.”

The emergence of digital humanities

Underhill’s work exemplifies the burgeoning field of digital humanities, in which scholars in disciplines such as history, literature and philosophy use technology to push the boundaries of their research. He compares his use of computer programming in art history to that of a scientist developing software to better understand the intricacies of chemical or biological reactions.

Underhill imagines how architecture and paintings once appeared based on unadulterated natural light and their alignments to the sun. Then, using computer software, he reconstructs buildings and archaeological sites — often ones that no longer exist or are in ruins — to show how light would have interacted with paintings at specific times in specific places.

Teotihuacan, for instance, flourished between 250 and 750 A.D. in present-day Mexico, and accounts of its culture have never been documented in writing. Our understanding of it comes only through archaeological investigations.

“I analyze how paintings of pyramids in Mexico came alive at twilight or how paintings kept in secret ceremonial dark places were activated by candles,” said Underhill, who earned a Ph.D. in art history from the University of California, Berkeley, in 2012. “I do with architecture and artwork what actors on CSI do in crime scenes.” 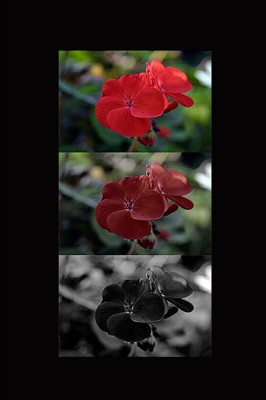 Illustration of the Purkinje effect, or the way in which our perception of the color red becomes less sensitive with decreased light (Photo/courtesy of Justin Underhill)

Where buildings were constructed also had a religious or even ritualistic significance in many cultures, Underhill said.

“Often looking at sites in a particular way reinforced a worldview that allowed people to experience something divine,” Underhill said. “Many temples were built to reflect changes in the seasons or the way in which light filtered through a window to align with important events in the biblical calendar.”

“Mellon is the major funder of the humanities in the world,” said Peter Mancall, vice dean for the humanities and professor of history and anthropology at USC Dornsife. “USC Dornsife was chosen because we have such a strong program in the humanities as well as stellar technological resources from the cinema school.”

Mancall, also Andrew W. Mellon Professor of the Humanities and Linda and Harlan Martens Director of the USC-Huntington Early Modern Studies Institute, believes that the grant will lead to discoveries that could never have been possible without employing modern technology.

“We are finding scholars at pivotal moments in their careers, either finishing dissertations or starting a postdocs, and giving them the most advanced tools to work on their projects and take them to levels that none of us can yet anticipate,” he said. “Justin’s research is breathtaking — cool beyond belief.”

When paintings came alive at twilight