It’s no surprise that award-winning food writer Cathy Thomas ’68 spends so much time in the kitchen. You can usually find her cooking, when she’s not busy cranking out another book or writing her weekly column for the Orange County Register.

What’s surprising is that she ended up being a writer at all.

“In my first English class at ’SC, I got a C-minus on my paper, and I thought it was brilliant,” Thomas said. The professor disagreed, and said the C-minus was a gift.

“The fact that I turned out to be a writer is funny.”

Funny, perhaps, but Thomas’ love of cooking and success at writing led her to New York in November, where she spoke at the prestigious James Beard House – the foodies’ equivalent to Carnegie Hall. Each month, the James Beard Foundation’s “Beard on Books” series features a different author discussing their latest work; Thomas spoke about 50 Best Plants on the Planet, her third book.

“I have this love of vegetables,” Thomas said. “A lot of people just equate vegetables with kind of a nasty smell and taste. They’re not like that at all if they’re prepared properly.”

That love of vegetables goes back to childhood, when her mother promoted a diet high in vegetables and lean protein and low in sugar and processed foods, long before it was popular.

“All my friends said my mother was a ‘health nut,’ but it prepared me in many ways to write these books,” the author explained.

Thomas’ parents had lived through the Depression and wanted their daughter to get a job that would provide for her. So she headed to USC.

When I graduated from high school, there were no places in America for women in professional kitchens.

“What I really wanted to do was be a chef, but in 1964, when I graduated from high school, there were no places in America for women in professional kitchens,” she said. Instead, she turned to education – and romance.

“I did a really smart thing at USC: I fell in love with a French professor’s son, who I married. That got me into French homes and French kitchens and eventually into culinary schools in France and England.”

It also meant putting her education degree to use, right away.

“I worked as a teacher to put my ex-husband through medical school,” she said with a laugh. “It was a really smart romance.”

After seven years of teaching kindergarten, she left the classroom when the first of her two daughters was born. But she didn’t leave teaching, instead giving piano and cooking lessons at home: “I was a stay-at-home working mom.”

Her cooking classes drew the attention of food editors at the Register. She began writing occasionally for the paper, eventually becoming full-time food columnist. In 2001, the Association of Food Journalists named Thomas the top food columnist among her peers at the nation’s largest newspapers. 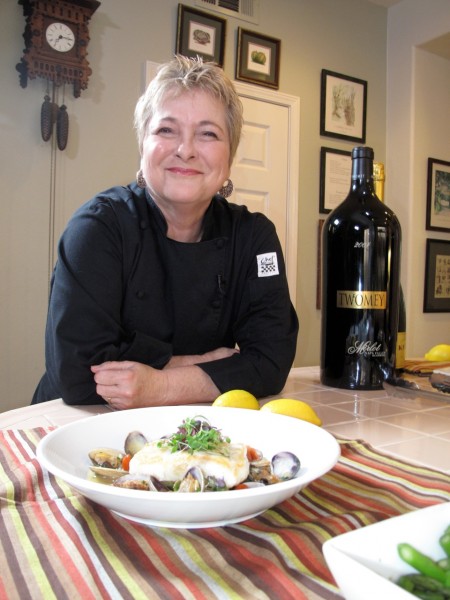 Cathy Thomas relaxes in her kitchen. (Photo/courtesy of cathythomascooks.com)

The ever-smiling Thomas has hosted countless top chefs in her Huntington Beach kitchen. But an encounter at another chef’s home left an indelible impression: lunch in Julia Child’s kitchen.

It wasn’t a grand feast, just a simple tuna sandwich, served up with some sage advice.

“She said it was really important for me to write books, and so I did,” Thomas said. “I would have continued to write for the newspaper every week and been very happy.”

Instead, Thomas took her love of vegetables and flair for writing and got to work. The result was her first book, Melissa’s Great Book of Produce, created with sponsorship by Melissa’s Produce, the nation’s largest distributor of specialty produce.

A twist on turkey

As expected, holidays in Thomas’ kitchen are a big deal. At Thanksgiving, she and her husband hosted 17 guests (including Thomas’ ex-husband), where she served up the traditional turkey feast as well as a “tofurkey” for the vegans in the crowd.

But she’s a big fan of Barefoot Contessa Ina Garten’s new approach to the holidays. In Garten’s latest book, Make It Ahead, the Food Network star advises roasting the turkey ahead of time, making gravy before the guests arrive, then reheating the meat atop the gravy on an ovenproof platter. The result is moist, delicious, piping hot and stress-free.

“I think it’s a grand idea because cooking a turkey feast … the last half an hour is a nightmare even for somebody that cooks all the time,” Thomas said.

Thomas got a bit of a surprise after she recently interviewed Garten. As she looked at photos in Garten’s latest book, Thomas noticed her own second book, Melissa’s Everyday Cooking With Organic Produce, on a shelf in the Contessa’s home.

I still learn something new almost every day about cooking.

“Food has given me a career that I have loved, and I still enjoy cooking,” Thomas said. “I still read cookbooks at night while I’m in bed. I still learn something new almost every day about cooking.”

In addition to her books and newspaper work, Thomas has branched out into new media with a website and also does regular video segments about chefs and cooking.

When she started making the videos, she said, it was easy: “I had taught cooking for 20 years at that point, so I knew how to stand up in front of people and cook.

“It’s so interesting to me: One of the reasons I absolutely wanted to go to ’SC is because they didn’t require me to take public speaking,” Thomas said.

But they did make her write – and that got her cooking.

Even when it looks as if she’s not working, creativity comes for alumna and motivational speaker Barbara Jo Gallagher.

Sustainability-minded students hatch a plan for the Trojan Backyard Chickens Club. And they’ve already had a coopwarming party.

Looking for tasty ways to get your vegetables? She wrote the book on it