When Zak Ebrahim was 7 years old, his Egyptian-born father, El-Sayyid Nosair, shot and killed the founder of the Jewish Defense League, Rabbi Meir Kahane. From behind bars, his father co-masterminded the 1993 bombing of the World Trade Center.

“He exposed me at a very young age to the intolerance and radical nature of extremism,” Ebrahim said of his father. “And yet I stand before you all today with a simple message: that no matter the level of violence you’ve been exposed to, it doesn’t have to define your character.”

Ebrahim, who released a book The Terrorist’s Son: A Story of Choice earlier this year, shared his story of overcoming a terrorist father to dedicate his life to spreading a message of peace and non-violence at a Distinguished Speaker Series event offered on Dec. 4 by the Center for Risk and Economic Analysis of Terrorism Events (CREATE), based at the USC Price School of Public Policy and the USC Viterbi School of Engineering.

“Zak’s personal story is an incredibly insightful perspective on the issue of radicalization,” said USC Price Adjunct Professor Erroll Southers, CREATE’s director of transition and research deployment, who coordinates the speaker series. “It took extraordinary courage for him to turn his life experiences into a voice for peace, non-violence and interfaith dialogue. His talk was remarkably thought-provoking and impactful for our audience.” 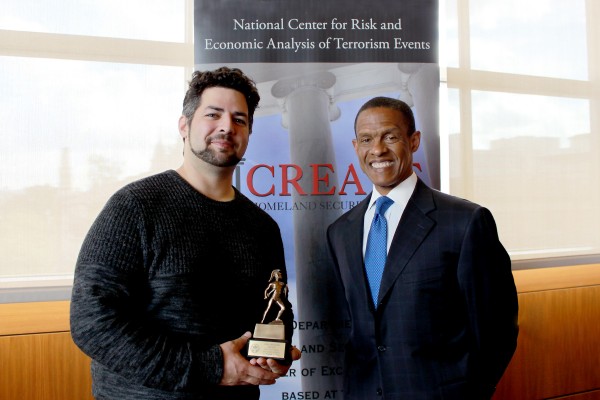 Zak Ebrahim accepts a replica of Tommy Trojan from Erroll Southers as thanks for appearing at the Distinguished Speaker Series. (Photo/Erin Pearson)

Ebrahim, who was born in Pittsburgh, recalled that a few months prior to his father’s arrest, Nosair brought him to a shooting range on Long Island along with co-conspirators of the World Trade Center bombing.

His father showed him how to aim the rifle, and when he hit the target, it was his proudest moment as a child. Later, he burst the small orange light above the target and everyone laughed, saying what translated to, “like father, like son.”   Years later he realized they thought they saw in him the same destruction of which his father was capable.

After running from his father’s shadow for most of his life, changing his name and moving with his mother 20 times by the time he was 19, Ebrahim, now 31, decided in his mid-20s that he had an obligation to tell his story to dismiss stereotypes by showing that, although he had been subjected to this violent, intolerant ideology, he had not become fanaticized.

“His boldness in coming out to speak publicly and not being afraid to promote peace because of his father’s wrongdoings is admirable,” said Corinna Jiang, a second-year master of public administration student at USC Price and president of the USC Homeland Security Student Organization. “We can all relate at some extent to his journey of gaining an understanding about the experiences he had to go through at such a young age.”

Groups like ISIS use the lack of opportunity in war-torn countries to fill their ranks, and that is where we can make a difference.

Nosair, who is serving a life sentence, attempted to contact his son through email a few years ago. Ebrahim accepted, hoping to get answers, but it didn’t go well, and he decided that it wasn’t healthy to be in communication with his father.

Ebrahim also thinks that U.S. military operations in the Middle East have contributed fodder for extremists.

“Groups like ISIS use the lack of opportunity in war-torn countries to fill their ranks, and that is where we can make a difference,” Ebrahim said. “That is why we must choose peace.”

Former DHS official outlines the elements that make the USC center a key part of the department’s enterprise.

Al-Qaida is weak, but one way it could resuscitate itself is through the Syria conflict, CNN national security analyst Peter Bergen said during the Distinguished Speaker Series event.

Terrorist’s son offers a message of peace at USC talk