If a picture is worth a thousand words, then you’re in for a 14,000-word treat. Here are 14 images from USC in 2014 that made us catch our breath, break out in a smile or stare in wondrous amazement. 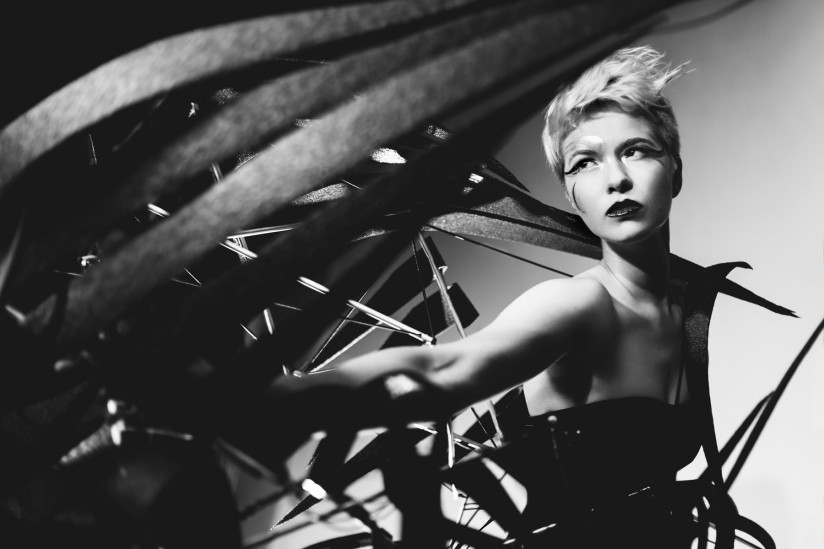 Jessie Rabideau models an exoskeletal outfit developed as part of the USC School of Cinematic Arts’ World Building Media Lab. Participants created a virtual city with virtual inhabitants; the outfit illustrates how those inhabitants might appear and how that might affect their interaction with each other. The exercise was a means to creatively consider the challenges faced by real cities. 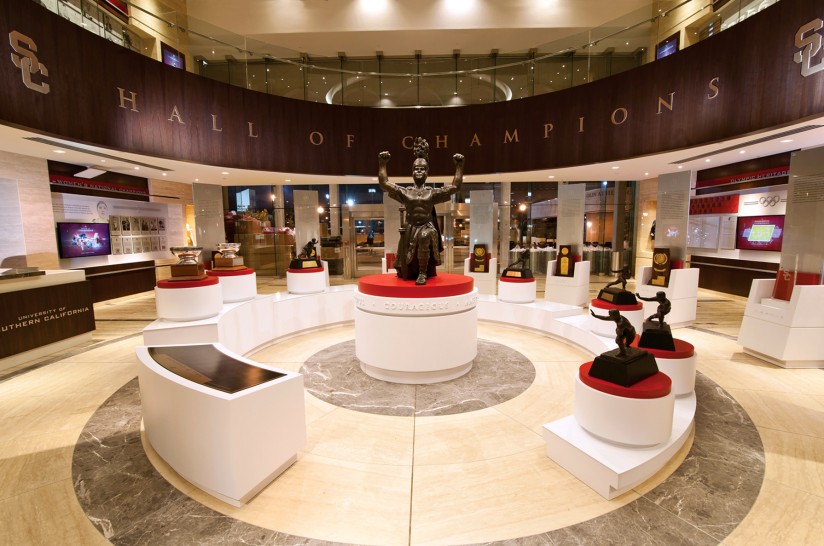 Heritage Hall — with the two-story Hall of Champions as its centerpiece — reopened in February after a $35 million renovation.

One veteran, many faces 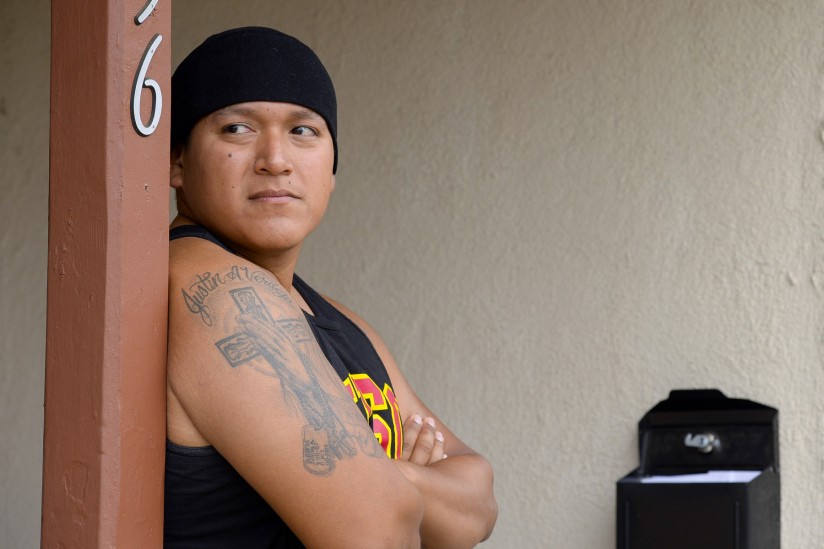 As USC’s Veterans Day commemorations approached, David Flores let us tag along on a day in the life of this busy student-veteran. 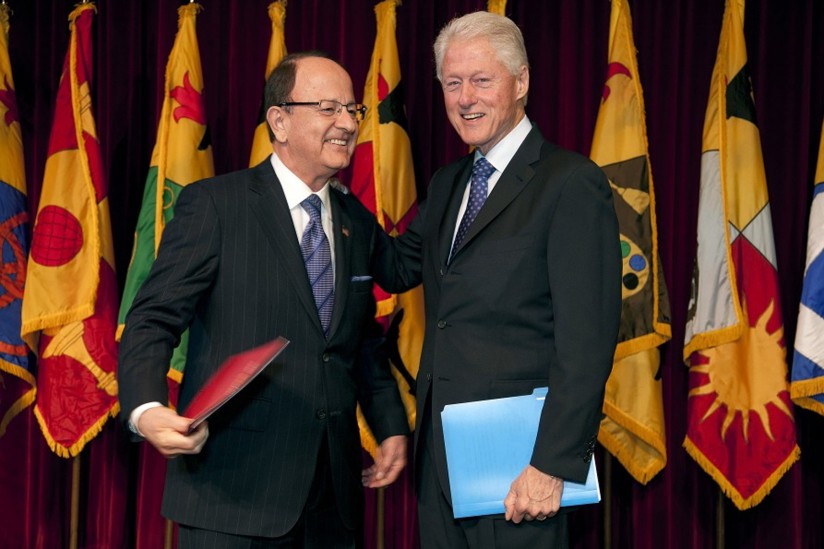 Light up the night 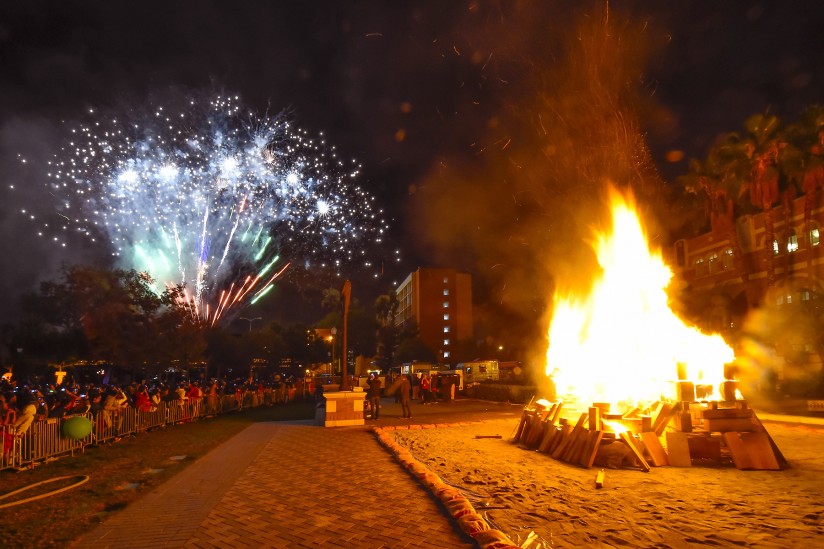 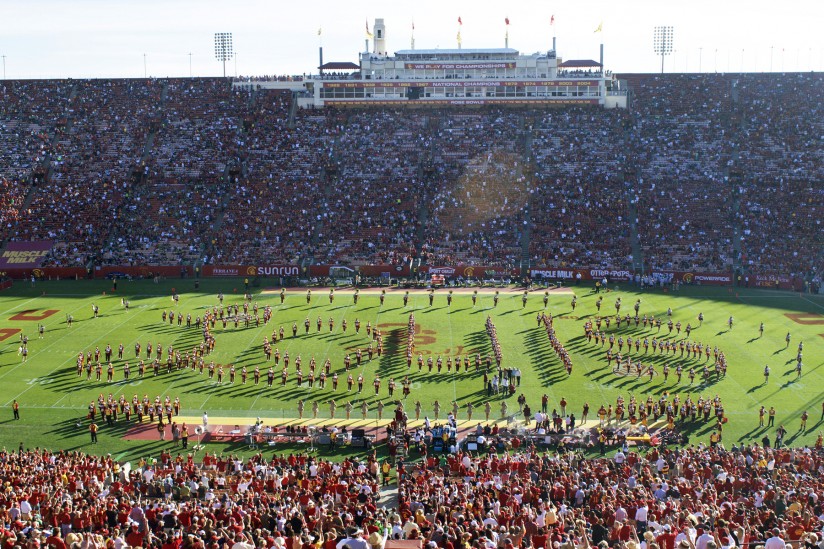 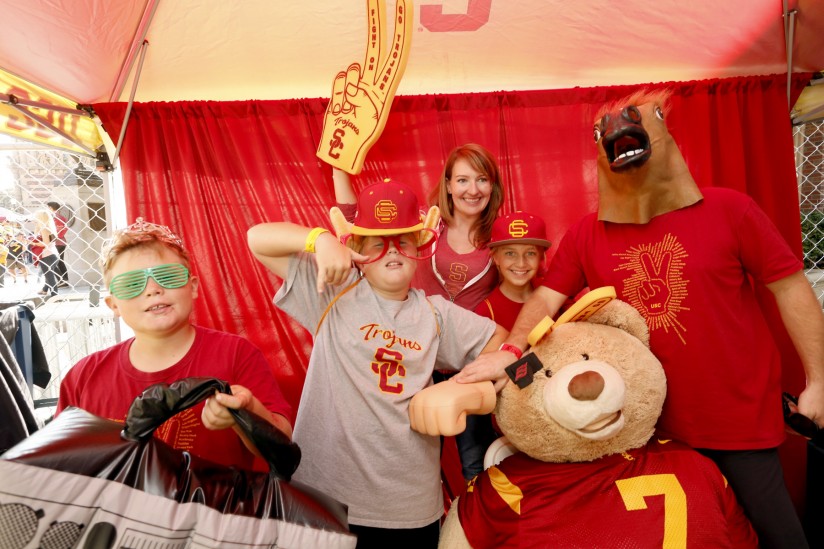 The whole family — from horse-head-wearing dad to the giant stuffed pet — donned cardinal and gold during Homecoming festivities Oct. 18. 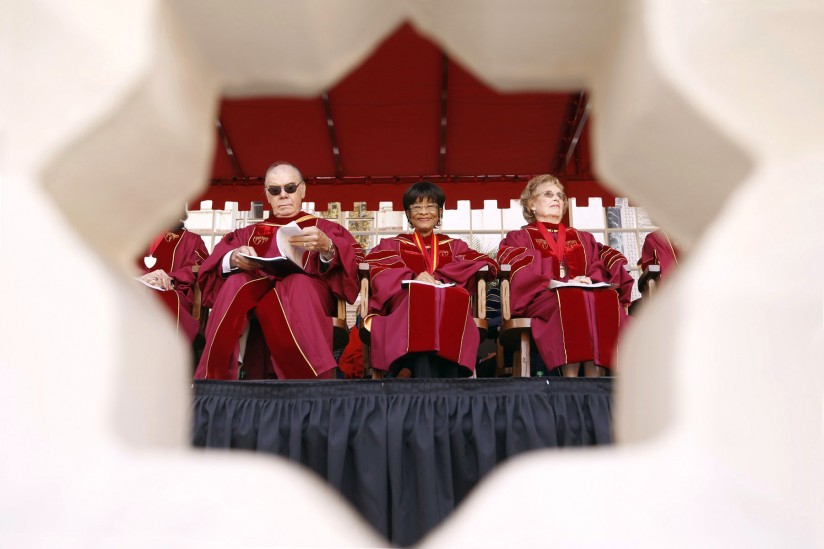 Honorary Trustee Verna B. Dauterive catches the photographer’s eye during the new student convocation ceremony Aug. 21. The event is one of USC’s special ways of welcoming incoming Trojans. 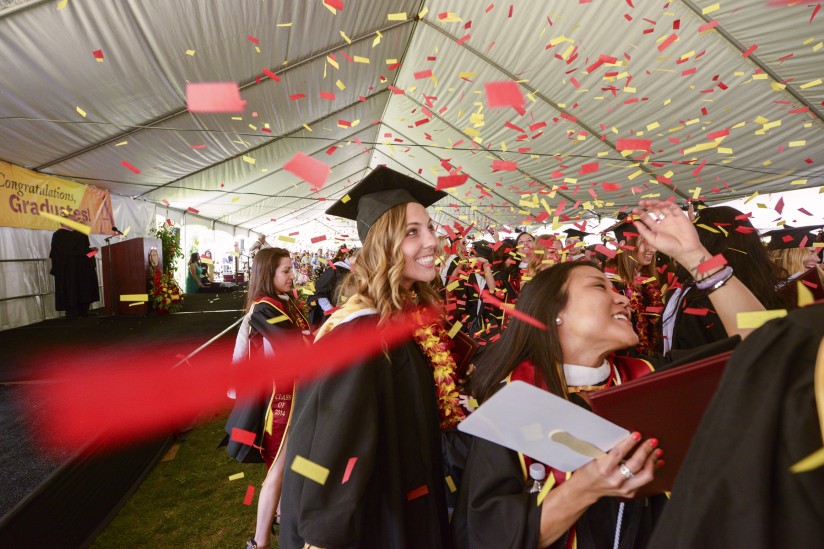 Students from the USC Annenberg School for Communication and Journalism enjoy a cardinal and gold celebration as the school’s commencement ceremony draws to a close. 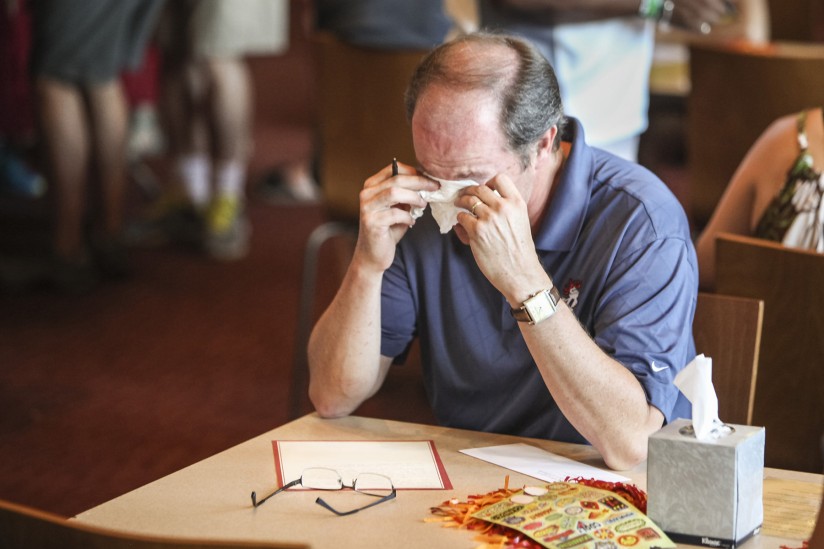 Welcome Week brings a mix of emotions for the incoming students – and their parents, too. Here, a father cries while writing a letter to his freshman student on move-in day. The Office for Parent Programs delivered the letters during the first week of classes. 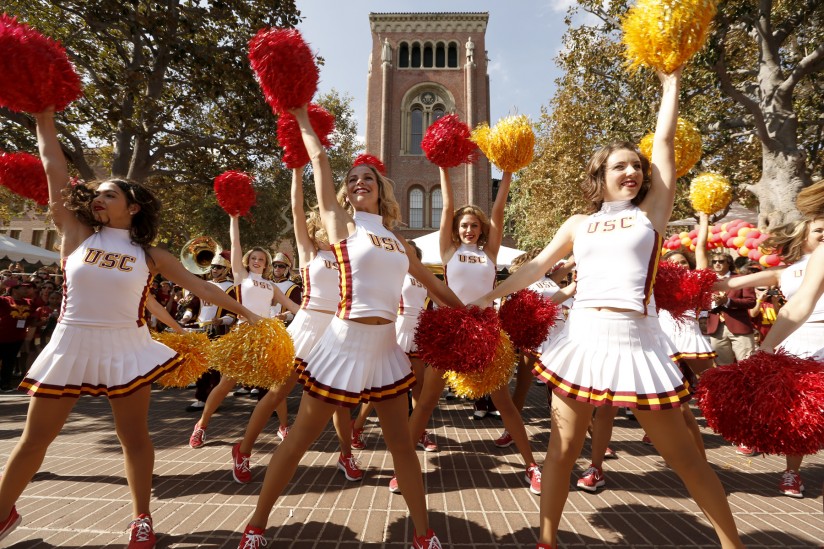 Wherever Trojans gather, the Song Girls (with the Trojan Marching Band in the background) are likely not far behind.

Running with the troops 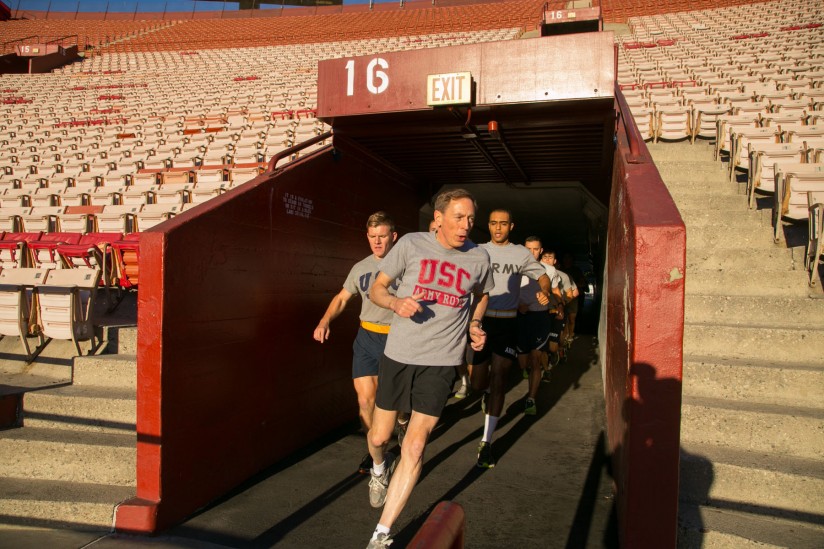 Retired Gen. David Petraeus, a Judge Widney Professor with a joint faculty appointment at the USC Price School of Public Policy, visited the University Park and Health Sciences campuses during the days leading up to Veterans Day. His activities included a morning run in the Coliseum with ROTC cadets.

Paul Debevec and a team of USC 3-D imaging specialists headed to the White House to work with the Smithsonian Institution on a first-ever project to create 3-D portraits of a sitting president. 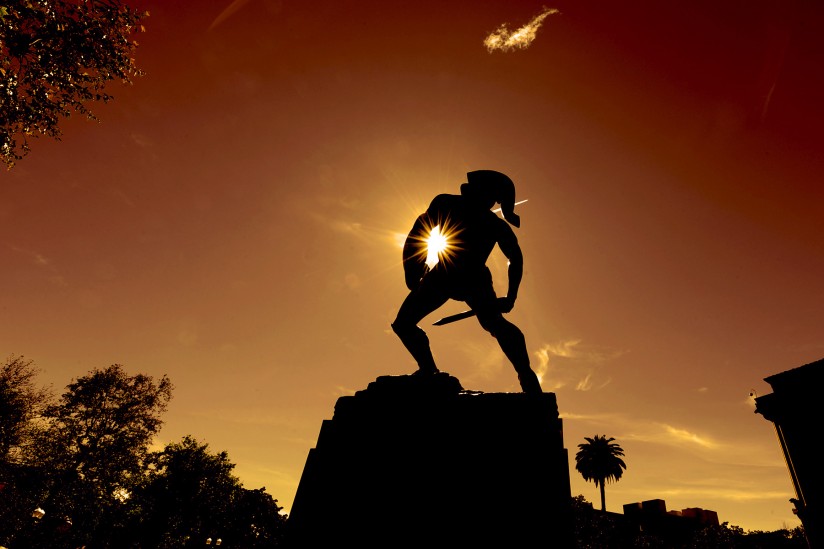 The Grammy Award-winning artist offered insight and feedback to students in the Popular Music Forum.