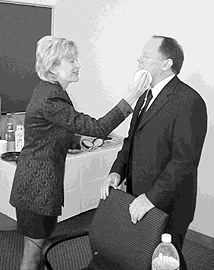 Assistant Professor of Journalism and KTLA-TV anchor Terry Anzur (above left) takes the shine off of Joseph P. Allen, vice provost and dean of admissions, in preparation for the fourth annual Webcast of USC’s commencement.

Anzur and Allen hosted the three-hour Webcast, which was also carried live on the L.A. Channel on most local cable systems, and on the USC Channel (Prime One Tele-TV Channel 408). Members of the Trojan Family from around the globe, along with reporters at dailies around the country, tuned in to the gala proceedings via the Internet. Above right, on a third-floor balcony in the new Lewis Hall, they interview honorary degree recipient and architect Frank Gehry, who received a doctorate of fine arts. Gehry’s advice to young architects just starting out: “Be yourself,” he said, rather than trying to emulate others.

Out in the throngs of new graduates and their families, two broadcast journalism graduate students, Teresa Jun and Max Roth, conducted live interviews. Below, Jun interviews a happy graduate. The Webcast can be found at: https://www.usc.edu/commencement.