As a child, Nnenna Ezeh pretended to perform surgery on her dolls. At age 5, she opened up a present on Christmas Day and found a real stethoscope.

“This is a tangible expression of your dreams,” her mother told her, hoping the gift would reinforce her young daughter’s passion. “Keep it to remind you of what you want to do.”

The presidential scholar is now pursuing those dreams as a major in health and humanity at the USC Dornsife College of Letters, Arts and Sciences. Her focus is working with underserved communities.

“I was raised with the idea of service first, and I have a passion for it,” said Ezeh, whose mother Nkechy Ezeh, an associate professor at Aquinas College, established the nonprofit Early Learning Neighborhood Collaborative. The organization provides educational resources to low-income children in Michigan, where Ezeh grew up.

A natural with kids

While in high school, Ezeh volunteered as a child care assistant at a community center that her mother directed prior to founding the collaborative. She worked with children from newborns to age 12.

It was cool to interact with students and give them attention they may not have been getting at home or even at school.

“I helped them learn how to read or with their homework after school,” said Ezeh, a senior minoring in natural sciences and health care studies. “It was really cool to be able to interact with students and give them one-on-one attention that they may not have been getting at home or even at school.”

“I want to have the first tangible impact on a patient and help influence their health behaviors and habits for the better,” she said.

Pursuing a career in medicine will give her an opportunity to help correct disparities within the health care system, she noted.

“Being a primary care doctor will allow me to better serve people who don’t have access to quality and affordable health care,” she said. “I would like to do whatever I can to make a difference in people’s lives.”

At USC Dornsife, Ezeh has participated in Trojan Health Volunteers since her sophomore year. Administered by the Joint Educational Project at USC Dornsife, Trojan Health is a community outreach program that gives pre-health students the opportunity to gain exposure to their future occupations.

As part of the program, Ezeh has worked in hospitals throughout Los Angeles. “I specifically picked hospitals in downtown Los Angeles,” she said, “because they serve a unique population such as the homeless and the poor.  ” 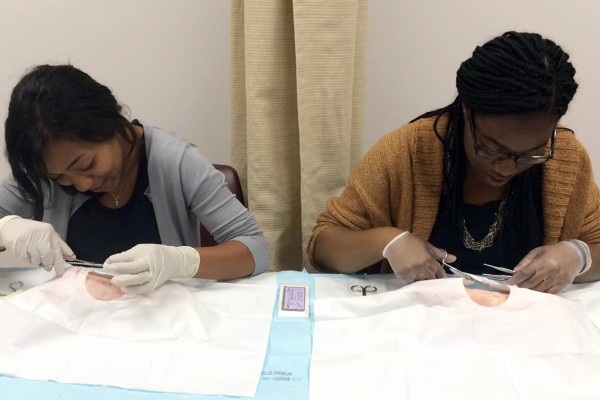 Most recently, she volunteered at California Hospital Medical Center, where she worked with emergency services and in the maternity and neonatal ward.

As part of the hospital’s physician mentor program, she “shadowed” an obstetrician as she attended to her patients. One experience left Ezeh with a profound realization about the importance of the rapport between doctor and patient.

The doctor was attending to a pregnant woman who was experiencing complications. Ezeh watched as the doctor translated complicated medical terms into plain English.

“It was very interesting to see how the physician had to modify her bedside manner and describe things a little more in-depth and a little more clearly so her patient could understand it,” Ezeh said. “But it never affected negatively upon how she interacted with the patient. There was no bias. There was no disapproval or judgment placed upon her.”

The situation reminded Ezeh to always see the humanity in whomever she will be treating.

“It served as a great reminder,” she said. “As a doctor you have the power to help a patient understand her body by explaining what’s going on in a way that she understands without devaluing her.”

NetKAL group invests in the future of its long-running civic program.

Communication course puts theory into practice for the community

USC Annenberg students devise a communication strategy to boost the efforts of an urban youth program.

Presidential scholar sets her sights on the underserved