As a young law student, Frederick Aguirre ’68 was interning with the U.S. Department of Justice’s Civil Rights Division in 1970. An exhibit at the Smithsonian Institution commemorating the 25th anniversary of the end of World War II caught his eye.

Aguirre’s family, who emigrated from Mexico and set down roots in the United States starting in the 1890s, has a long history of military service. His father, two uncles and 23 cousins served in that conflict. Many other family members and friends served in the Korean and Vietnam wars.

“I went to the exhibit with the pride of my family having served in WWII, hoping to see positive signs of the service of our military men, especially Mexican-Americans,” said Aguirre, who earned his bachelor’s in history from the USC Dornsife College of Letters, Arts and Sciences and is now a California Superior Court judge in Orange County.

As he began walking through the exhibit, Aguirre was pleased to see some minority groups that faced discrimination at home were presented as patriotic heroes in special sections celebrating African-American and Japanese-American servicemen. But for Latinos who served their country, Aguirre found only a small display on the Zoot Suit Riots of 1943 when racial tensions in Los Angeles escalated between on-leave servicemen and Mexican-American youth, erupting in three nights of fighting in the streets.

More than 500,000 Latinos served in WWII. We’re a part of the fabric of this country.

“It angered me,” Aguirre said. “More than 500,000 Latinos served in WWII. We’re a part of the fabric of this country. To be displayed in such a negative and unpatriotic manner, showing Mexican-Americans as enemies of the state at our national museum, was egregious.”

Since that moment, a desire to present the full picture of Latinos’ contribution to the military simmered in Aguirre.

Filling in the gaps

In the 1990s, he and his wife, Linda Martinez Aguirre, a history teacher whose Mexican-American family also had many members serve in WWII and other wars, decided to fill in gaps in the historical record. They established Latino Advocates for Education (LAE), a nonprofit founded with their friend Rogelio Rodriguez. Together, they started interviewing Latino veterans they knew through family and friends, documenting their service in the U.S. military.

“We would tell somebody to get us the names and photographs of their loved ones,” Aguirre said. “From there, it snowballed.”

In addition, LAE launched an annual Veterans Day event in 1996 to honor Latino servicemen at Santa Ana College, which was later held at California State University, Fullerton. Organized entirely by Aguirre, his wife and Rodriguez, the event ran for 15 consecutive years. They brought in Latino Medal of Honor recipients and Latino generals to speak about their experiences. Prominent figures gave speeches and presented veterans with certificates commemorating their service, including then-Gov. Gray Davis and Rep. Loretta Sanchez of California. Military vehicles were displayed and bands performed. One year, two F/A-18 Hornet fighter jets did a flyover. The Aztec Skydiving team even parachuted into the crowd.

Aguirre said that his time at USC Dornsife was significant in shaping his interest in history. He remembers how his professor Doyce Nunis encouraged him to pursue his doctorate in California history.

“I was very impressed by that,” Aguirre said. For a while he considered the idea. But as a self-described “child of the ’60s,” Aguirre was inspired by the civil rights movement and decided to earn his law degree.

He remembers when he listened to Martin Luther King Jr. speak at USC in 1967 at Bovard Auditorium. “I was very moved by it,” Aguirre said.

I want to show the political maturation of Latinos after WWII as a result of their service to this country.

Now when Aguirre isn’t consumed with his work in court, he films his interviews with Latino veterans in hopes of making a documentary about their experiences.

“I want to show the political maturation of Latinos after WWII as a result of their service to this country,” he said.

For instance, upon returning from the war, a number of Latinos took on leadership roles in politics and public service. One was Edward Roybal, who after returning from his military service in WWII, served on the Los Angeles City Council for 13 years and then in the U.S. House of Representatives for 30 years. He also established the Edward R. Roybal Institute on Aging housed at the USC School of Social Work. 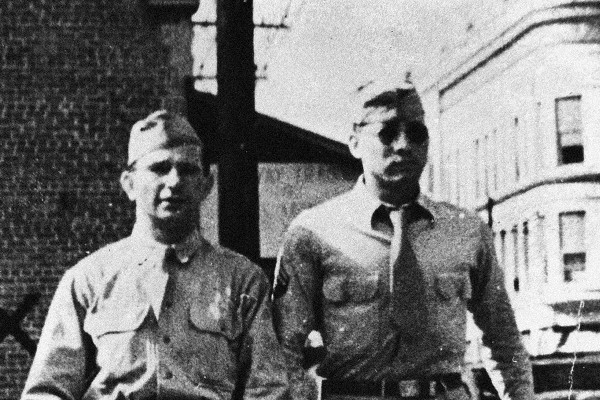 Aguirre’s own father, Alfred Aguirre, after returning from serving in WWII, was elected to the Placentia City Council in 1958; he was the second Latino elected to a city council in Orange County’s history.   Aguirre keeps a photograph of his father in his judge’s chambers as a reminder of the contribution Latinos have made in the military.

The image shows Alfred Aguirre in uniform in Honolulu during his basic training in 1945. He’s walking down the street with his best friend. The elder Aguirre, forced to drop out of school at age 14 to support his mother and siblings after the death of his father, went on to join the Army Air Corps of Engineers. His unit built the Kadena Airfield in Japan.

“The image is instructive,” Aguirre said. “Here is a Mexican-American kid from segregated schools with a ninth-grade education working as an engineer.

“I am inspired each day seeing this photograph of my father proudly wearing his uniform and serving his country.”

Alum goes on the record for Latino patriots