In 2004, the California Institute for Regenerative Medicine was created to dispense $3 billion in voter-approved dollars to fund stem cell research in the state. Progress has been impressive. This year alone, 10 CIRM-funded projects for potential medical treatments, including those based at USC, are expected to be approved for clinical trials.

To celebrate this milestone, CIRM recently held a press day at the Eli and Edythe Broad CIRM Center for Regenerative Medicine and Stem Cell Research at USC. The facility would not exist without funding from CIRM, noted Carmen A. Puliafito, dean of the Keck School of Medicine of USC.

“With this funding,” Puliafito said, “our researchers and researchers in 11 other facilities throughout the state gained dedicated space to hunt for cures for some of the most pernicious diseases in the world, including heart disease, stroke, cancer, diabetes, Alzheimer’s disease and Parkinson’s disease.”

A distinguished panel of speakers joined Puliafito in highlighting CIRM’s decade of accomplishments.

Jonathan Thomas, chairman of CIRM’s governing board, called the stem cell agency’s first 10 years “a most exciting and historical time in medical research.”

What Silicon Valley has done for technology, CIRM is doing for stem cell research in California.

Dhruv Sareen, a research scientist at the Regenerative Medicine Institute and director of the iPSC Core Facility at Cedars-Sinai, praised CIRM for creating a new industry in the state.

“What Silicon Valley has done for technology,” Sareen said, “CIRM is doing for stem cell research in California.”

One beneficiary of this new industry is ViaCyte, a San Diego-based company now in clinical trials with a small, implantable device containing stem cells to treat Type 1 diabetes.

“In 2008, it was extremely hard for a small biotech company to get funding for the kind of work we were doing,” said ViaCyte’s Eugene Brandon. “Without that support, without that funding from CIRM, I don’t know where this work would be today.”

Another biotech company, Sangamo BioSciences, is collaborating on a CIRM-funded HIV/AIDS clinical trial with principal investigator John Zaia, chair of virology at the Beckman Research Institute of City of Hope.

At the event, Zaia credited CIRM with creating a “climate of research that is relatively product- and milestone-driven.”

CIRM supported this clinical trial from its inception by providing $14.6 million to fund the early stage development of a technique for genetically modifying blood-forming stem cells to cure HIV/AIDS, pioneered by Zaia, David DiGiusto from City of Hope, scientists at Sangamo BioSciences and Paula Cannon, associate professor of molecular microbiology and immunology, pediatrics, and biochemistry and molecular biology at the Keck School of Medicine. 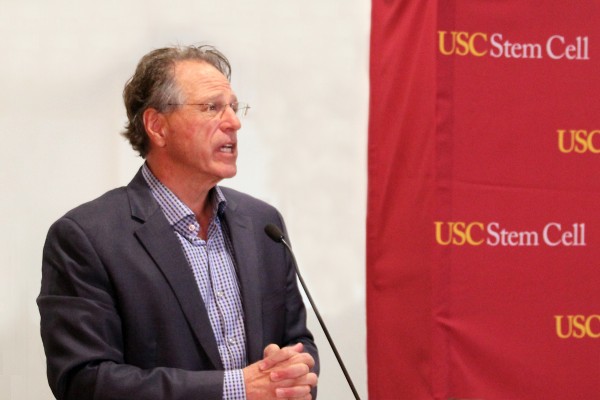 As the head of USC’s department, research center and university-wide initiative in stem cell biology and regenerative medicine, Andrew McMahon underscored the importance of this HIV/AIDS trial. He also mentioned other USC-led clinical trials exploring stem cell-related treatments for Alzheimer’s, the dry form of age-related macular degeneration, knee osteoarthritis and immune damage due to chemotherapy.

“I’m personally very excited and hopeful about the future of stem cell research in California,” he said. “The public support of our work through Proposition 71 has enabled our own researchers to spearhead important new research programs and to develop new therapeutic approaches. But as important, CIRM funding has brought together powerful, cross-institutional teams that have united research around the goals of regenerative medicine to treat a host of diseases affecting humanity.”

“Dr. Donald Kahn, through the Mattel Children’s Hospital at UCLA, has brought cures to 18 children who have a lethal form of immune deficiency, otherwise known as ‘bubble baby’ disease, through correcting the genes in the stem cells of these children,” Crooks said. “These trials were absolutely supported by CIRM, which was critically important to bringing them to fruition.”

The last word was left to Bob Klein, president of the advisory service Klein Financial Corp., who led the drive to create CIRM.

“The genius of the people of this state is reflected in their commitment to this cause,” he said, “and we should all be eternally grateful for their vision in supporting research that will save and transform people’s lives.”

Science and fiction come together in new stem cell course

Open to all majors, the unique elective will link health sciences to liberal arts.

Keck Medicine of USC research to slow vision loss for macular degeneration patients has been funded as part of the third round of the California Institute for Regenerative Medicine’s Disease Team awards.