A distinguished panel of leading economists and tax scholars is convening at USC on Dec. 4 to discuss USC Gould School of Law Professor Edward Kleinbard’s acclaimed book, We Are Better Than This: How Government Should Spent Our Money.

Alan Auerbach, a professor at the University of California, Berkeley and one of the country’s most highly regarded public finance economists; Joseph Bankman, a leading tax law scholar at Stanford University; and Edward McCaffery, a USC law, economics and political science professor, will headline the event in Heritage Hall’s Bashor Lounge.

“I am humbled and thrilled that these eminent individuals were willing to invest the time to discuss my book,” said Kleinbard, Ivadelle and Theodore Johnson Professor of Law and Business. 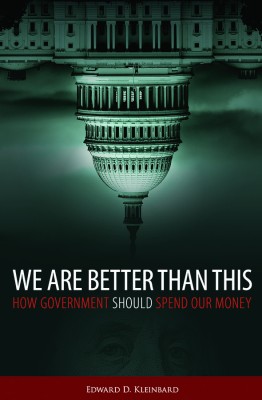 We Are Better Than This looks at inequality in America. (Photo/courtesy of USC Gould)

Kleinbard, an internationally recognized tax scholar, published the book in October. We Are Better Than This has received high praise in publications ranging from the Los Angeles Times to The Washington Post. Fortune called Kleinbard a “prolific, witty and effective polemicist whose new book is a must-read for anyone who wants to be educated about taxes and social policy.”

Kleinbard joined USC Gould in 2009 after serving as chief of staff of the U.S. Congress’ Joint Committee on Taxation, the nonpartisan tax resource to Congress. He previously worked for two decades as a partner in the New York office of Cleary Gottlieb Steen & Hamilton LLP.

His scholarship has received plaudits both inside and outside the legal academy. Kleinbard was recently called “a rock star in the world of tax law” by New York Times reporter Gretchen Morgenson and “a superstar tax practitioner, policy adviser and scholar” by Larry Summers, Harvard University President Emeritus and former secretary of the U.S. Treasury.

Kleinbard is putting inequality back at the center of American political discourse.

“Ed Kleinbard’s career is unparalleled,” Rasmussen said. “His book is a must-read for anyone studying policy, history, politics or economics.”

Greg Keating, USC Gould vice dean for academic and faculty affairs, added: “Ed Kleinbard’s book is a deeply meditated and bold proposal for addressing the rising tide of economic inequality in America. We Are Better Than This deserves to be mentioned in the same breath with Thomas Piketty’s Capital in the 21st Century. Together with Piketty, Kleinbard is putting inequality back at the center of American political discourse.”

The legal adviser is lauded as one of the leading tax scholars in academia.

U.S. Sen. Ron Wyden has jurisdiction over the tax code, which he calls a “dysfunctional mess.”

USC Gould Professor Edward Kleinbard will outline his proposals for international tax reform on June 13 before the U.S. House of Representatives Ways and Means Committee.